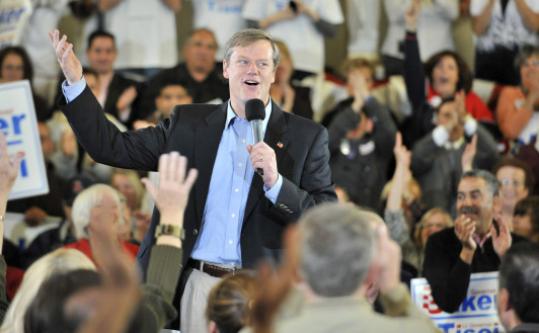 During the summer and fall, Charlie Baker signs sprouted across the North Shore. On Swampscott’s Monument Avenue, which was designed by Frederick Law Olmsted and where a series of war memorials stand, it was hard to miss the large white and red Baker placards that stood next to the candidate’s rambling white Colonial.

But until a couple of weeks ago, Baker’s lawn, which sits about 100 yards from the beach, was just green, absent even of fall leaves. These days, the man who could be governor has three diminutive signs bearing his name on his property, including one next to three pumpkins on his front stairway.

“It didn’t seem to me that it was a big deal,’’ said Baker, who has lived in the town for more than 18 years and hopes to become the first Swampscott resident to be elected governor.

In a town that has traditionally voted Democratic, Baker’s measured and economy-focused political message has given local Republicans new hope. Still, even carrying the town in Tuesday’s election could be a challenge if Swampscott’s voting history means anything.

Since 1982, voters have sided with GOP gubernatorial candidates just three times: in 1990 and 1994 William Weld carried the town, and in 2002, Mitt Romney won. In the last election in 2006, Baker’s opponent, Governor Deval Patrick, defeated Kerry Healey, carrying 63 percent of the vote.

All these numbers don’t seem to faze Baker — the former Weld and Cellucci Cabinet member who went on to lead Harvard Pilgrim Health Care. Along the way, he managed to squeeze in a three-year term as a Swampscott selectman, the only other election where he’s had his name on a ballot.

When asked about his strategy to capture the hometown vote, he conceded that a plan had not really been drawn up. “I don’t need a strategy, I don’t think, a specific strategy for Swampscott,’’ he said. “No one knows me better than the people in Swampscott.’’

Like residents of other small coastal communities north of Boston, Swampscott’s residents are quick to celebrate their hometown luminaries. Men who meet each morning and sip coffee in small breakfast joints still talk about Dick Jauron’s records set as a Swampscott High School running back before he played and coached in the NFL. And every year, Swampscott’s Drama Club honors its best actor with the Walter Brennan award, named after the late three-time Academy Award winner who grew up in the town.

Whether Baker has ascended to the heights of Jauron or Brennan — in the public’s view — is still a question. While Baker grew up in Needham, he’s lived in Swampscott for almost two decades — just the right amount of time, locals say, to no longer be considered an out-of-towner.

“I love the fact that there are a lot of families that have lived there for a long time — you know, one generation to the next. It gives the place a sort of familial feel. The people who live there are really committed to the community in a big way, which is great,’’ said Baker, who holds a July 4 barbecue every year and supports youth sports. He wears a Big Blue Nation rubber wristband and a blue and white threaded friendship bracelet that was given to him by his two children still in Swampscott schools. His oldest son attends Denison University in Ohio.

Lured here by the ocean and the chance to raise children outside of the city, Baker and his wife, Lauren, easily blended in with the town’s young parents and became active in organizing youth sports. For eight years, Lauren was registrar of Swampscott Youth Soccer. Baker became a huge fan of the high school football team and over the years, he’s been hard to miss at the games — pacing along the sidelines while watching his two sons play.

Baker’s profile rose in the town in 2004 when he topped the selectmen’s ticket. He also served on committees that helped change the town charter, choose a new town administrator, and build a new high school. As a selectman, he focused on the budget — which grew 16 percent over three years, in part due to increased school spending. He also kept a low profile, sponsoring mostly innocuous motions such as approving outdoor signs.

Depending on who you talk to, Baker’s three-year term in office is described as either a success or a disappointment. Some, like Town Administrator Andrew Maylor, say Baker’s fiscal experience in state government changed the way the town crafted its budget.

But Thomas H. Driscoll Jr., Essex County clerk of courts and a former selectman, said Baker could have done more. “I don’t really know of anything he did. I don’t understand why he was a selectman,’’ said Driscoll, a Democrat who will vote for Patrick.

Swampscott’s Randy Chapman, who has known Baker for 13 years, believes his term as a selectman could hint at the type of fiscal boss he would become if elected. “I think he gave us a lot of fiscal discipline, which we lacked for years. He was able to look at a town that was traditionally run by volunteer selectmen and bring it to another level and run it much more like a business,’’ said Chapman.