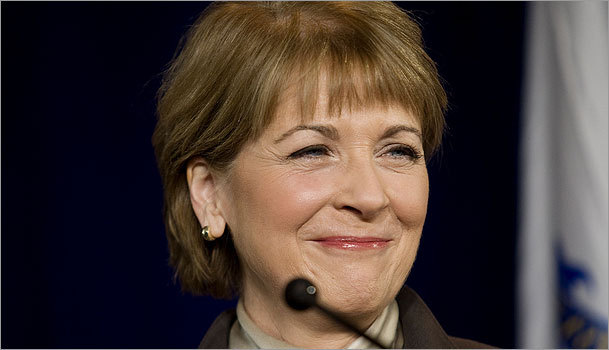 People in Massachusetts are understandably frustrated. Next week's special election comes in the midst of a too-long Senate debate on health care, showcasing much of what is offensive about the rules of the Senate. The fact that a final bill hasn't even emerged has left many people ready to toss away the whole thing. Stir in the anxiety that comes with a still-faltering economy, and voters are angry.

Both major-party candidates for Senate reflect something of that mood. Democratic Attorney General Martha Coakley, after more than two decades in law enforcement, is no pie-in-the-sky dreamer. Thoughtful and empirical, she views issues like a lawyer building a case. She promises hard work and no illusions. And in some cases, that means scaling back the ambition of government programs to carefully monitor what works and what doesn't. Like the consumer-protection lawyer she is, she looks for measurable results.

Republican State Senator Scott Brown, who drives an old truck, channels voter skepticism more directly. Ignoring signs of improvement in the economy, he casts President Obama as the source of today's problems, and would give the Republicans enough votes to block, under Senate rules, anything Obama wants to do. Affable in person, Brown nonetheless seeks to be a terminator, stopping the Democratic domestic agenda in its tracks.

In Massachusetts, the expected result of a Senate election is a Democratic victory, so Brown wins points for being different. He even entices voters to give him a try, noting that they can toss him out after three years.

Rarely has a pitch been more misleading. A vote for Brown is hardly a symbolic protest against congressional gridlock and the ways of Washington. It's a vote for gridlock, in the form of endless Republican filibusters, and for the status quo in health care, climate change, and financial regulation. That's what will happen if Brown gives the Republicans the additional vote they need to tie up the Senate.

Those are the real stakes in this campaign. It's easy to find a provision in any major bill that gives one pause, and to brandish it as a reason to scuttle the whole thing. Blocking bills is easy; finding a politically acceptable response to complicated problems is hard.

Voters who want to cast a critical eye on Washington without destroying the Democratic coalition should go for Coakley. Her quiet diligence in pursuing some of the most thankless, but deeply important, tasks in prosecuting child abusers, scouring the fine print of Big Dig contracts to bring back hundreds of millions of dollars, and securing $60 million from Goldman Sachs for its subprime mortgage abuses, contrasts sharply with Brown's five-year record of voting no in a state Senate run by the opposite party.

She is by far the more qualified candidate, in experience and judgment. She has prosecuted hundreds of criminals and helped coordinate plans to protect the state from terrorist threats. As attorney general, she's returned $1 billion to state coffers.

In a normal election, her credentials alone would distinguish her from Brown. But this year, a lot of people want to send a message. The message they should send is this: Massachusetts is fed up with Senate wrangling and wants clear answers on health care, climate change, and loose regulation of financial institutions. Coakley, with her hard work and proven skills, is well-qualified to carry this message to Washington.

Growing up in a large family in struggling North Adams, Coakley worked her way through Williams College and Boston University Law School, and then gave up a private law career to become an assistant district attorney. For years, her pay was low enough that, when running against three wealthier men in the Democratic primary, some questioners expressed shock at how little she had in the bank, as if she had somehow violated a cardinal rule of politics by not finding a way to cash in. Voters, however, rightly saw her modest, frugal lifestyle as a sign of character.

Coakley wasn't the most forceful or visionary candidate in the Democratic field, but her measured approach won broad support. She and her rivals touted the same issues — expanding health care, promoting renewable energy, protecting homeland security — but she conceived of them as problems to be solved, not crusades to be mounted.

To that end, she pledges to seek Ted Kennedy's seat on the Senate's Health, Education, Labor, and Pensions Committee, from which she could safeguard and enhance Massachusetts' vital interests and industries.

Brown's career has its own only-in-America sense of upward mobility, as he helped pay his way through law school by working as a model, then served as a lawyer in the National Guard, and eventually won an upset state Senate victory to represent the affluent western suburbs of Boston.

He has had little chance to enact legislation as one of only a handful of Republican state senators, but defined his career through opposition to Democratic initiatives. While many Massachusetts Republicans take liberal positions on social issues, Brown has been more in the mode of the national GOP, opposing gay marriage and winning the endorsement of pro-life groups, though he now pledges to uphold Roe v. Wade. He is most emphatic on health care, where he trumpets his desire to be the 41st vote against reform.

Most people can see some things that worry them in the health-reform bills that came out of the House and Senate. Coakley, for one, deeply opposes the restrictions on abortion coverage, but would not block the whole reform effort to get her way.

Brown will eagerly block it, arguing, with little to back it up, that the bill would cost Massachusetts more than it would deliver. He claims to want to go back to the drawing board. But the practical effect would be to throw away the drawing board. After the Clinton plan failed in 1994, many political pros thought wide-scale reform was impossible, a career-killer for any politician. If this year's attempt goes down in flames, there won't be another for a generation.

Brown's unsubstantiated assertion that the health bill would send money out of Massachusetts is typical of his approach to discrediting Democratic initiatives. For example, a "cap-and-trade" plan to reduce pollution is the cheapest and most efficient way to combat global warming, ensuring that plants that can reduce their carbon emissions cheaply will do so, while giving others a less costly alternative to retrofitting. But Brown simply dismisses the whole concept, which was pioneered by his fellow Republicans, as a tax. The alternative — imposing strict new regulations on emissions — would cost ratepayers far more. His opposition to trying 9/11 plotters in a civilian court is based on the idea that lawyers would be provided "at taxpayer expense," but the military commissions he prefers also require taxpayer money, including for lawyers. Brown's stands on the issues amount to far less than his animated presentation might suggest.

Despite his misleading arguments, Brown hasn't hidden his positions, which are largely negative and more conservative than those of most Massachusetts Republicans. Coakley, who stood to the right of some of her primary opponents, has a far broader appeal, embracing Democrats, independents, and Bill Weld-style Republicans. She is a fitting representative for today's Massachusetts. Voters looking to send a message should deliver the right one with her.

A look at the candidates