Obama changes US course on treatment of detainees 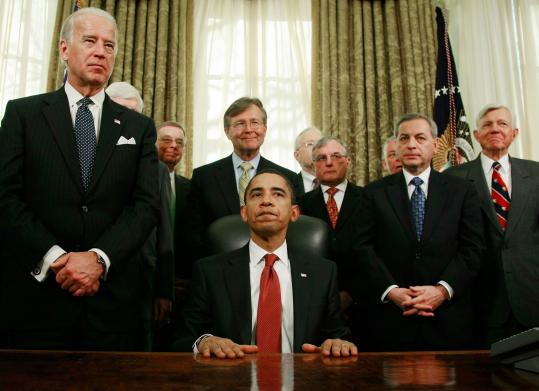 WASHINGTON - With a few strokes of his pen, President Obama charted a new path yesterday in the fight against terrorism, signing executive orders to close the Guantanamo Bay detention center within a year and to ban harsh interrogation tactics, such as waterboarding, that the Bush administration endorsed but that critics consider torture.

Within hours, Obama then joined new Secretary of State Hillary Clinton to declare to the nation's diplomats that the new administration will usher in a new era in American leadership in the world, one more reliant on diplomacy than military action, starting in the Middle East.

The president announced that George Mitchell, the former US senator from Maine who helped negotiate peace in Northern Island, will try to do the same between Israelis and Palestinians, while Richard Holbrooke, a former US ambassador to the United Nations who helped broker peace in the Balkans, will tackle the tensions in Afghanistan and Pakistan.

In remarks to State Department employees, Obama called on the Palestinian militant group Hamas to end its rocket attacks but declared that Israel must reopen its border with Gaza - an underlying factor in the recent flare-up in violence.

The speech, which drew enthusiastic applause, capped Obama's second full day in office, one carefully orchestrated to underscore stark changes in foreign policy from his predecessor.

By moving to close the detention center at the Guantanamo naval base and by immediately banning so-called "enhanced interrogation techniques," Obama removed two controversial linchpins of Bush's "war against terror." Obama said he intends to emphasize the rule of law and vowed to restore America's moral standing abroad.

"We think that it is precisely our ideals that give us the strength and the moral high ground to be able to effectively deal with the unthinking violence that we see emanating from terrorist organizations around the world," Obama continued. "We intend to win this fight. We're going to win it on our terms."

Despite moving swiftly and decisively, few of Obama's orders will result in quick changes, and several key issues remain unresolved.

In a briefing for reporters, senior White House officials could not detail how the president will solve complex legal problems created by closing Guantanamo, including what to do with detainees who can't be tried because of evidence problems but who may be too dangerous to release. The administration also left open the possibility that the CIA and other intelligence agencies may still get more leeway than the US military in how they interrogate terrorism suspects.

While leading Democrats and Republicans in Congress hailed the moves, several echoed the concerns of Representative Ike Skelton, a Missouri Democrat and chairman of the House Armed Services Committee, who said the administration must still determine "how to prosecute known terrorists with the full force of the law so that convictions stick; what to do with other hard-core detainees so that they do not return to the battlefield; and where to place detainees in the short term and the long term."

Critics of the reforms, including the top House Republican, John Boehner of Ohio, argued yesterday that some of the 245 detainees now at Guantanamo could pose clear threats to national security if released. Pentagon statistics show that of the hundreds of detainees that have been released from Guantanamo since it opened in early 2002, at least 61 have returned to terrorist activities.

"The real fear is what do you do with these terrorists and if you make it clear you are going to close Guantanamo and you don't have a policy in place to deal with those who are housed there, what do you do?" asked Boehner, who with other House Republicans quickly filed a bill seeking to bar federal courts from ordering Guantanamo detainees to be released into the United States. "I'm concerned that some of these let go too soon could end up back on the battlefield. There are a lot of unanswered questions."

So far, only 21 Guantanamo detainees have been charged under special military tribunals. Obama ordered a halt to those proceedings - including the trial for five Al Qaeda members allegedly involved in planning the 9/11 attacks - just hours after taking office on Tuesday.

In the meantime, Obama ordered that the detainees being held at Guantanamo must be treated humanely in accordance with the Geneva Conventions, including regular visits from the International Red Cross, a reversal of Bush administration policies.

Obama also banned the CIA from operating secret, overseas prisons where the Bush administration permitted harsh interrogation techniques. Although legal scholars and human rights specialists believe some of those techniques - such as subjecting prisoners to the sensation of drowning - constitute torture, Obama will review whether the CIA needs special authority beyond the 19 approved interrogation techniques in the Army Field Manual.

Some critics suggest that, by banning harsh interrogations, Obama has jeopardized intelligence agents' ability to obtain quality information for national security. But Obama said he believes the Army manual "reflects the best judgment of our military: that we can abide by a rule that says we don't torture, but that we can still effectively attain the intelligence that we need."

Some of the retired officers who joined Obama said the ban on torture would help restore the trust of US allies who have been outraged by recent US detention policies. "The steps we are taking today will be vital to restoring the trust and level of cooperation necessary," said retired Vice Admiral Lee Gunn.

Obama received sustained applause at the State Department when he told employees of the torture ban.

With Clinton, he hailed the appointments of Mitchell and Holbrooke as special envoys to troubled regions.

Mitchell, 75, brings impressive credentials to the assignment: he wrote a well-received report on the Israel-Palestinian conflict in 2001 and helped orchestrate the 1998 Good Friday agreement ending violence between Protestants and Catholics in Northern Ireland.

"I don't underestimate the difficulty of this assignment," Mitchell said, but he added, "There is no such thing as a conflict that can't be ended," noting that peace in Ireland came after "700 days of failure and one day of success."