A forceful, but narrow agenda 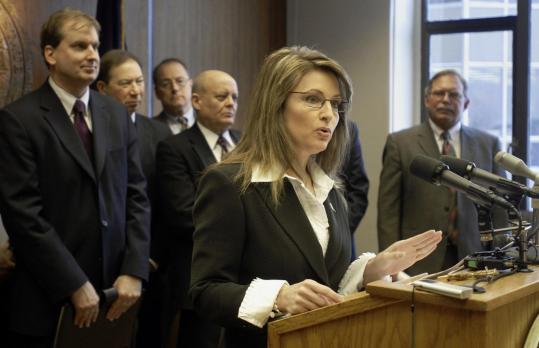 Sarah Palin introduced the Alaska Gasline Inducement Act last year in Juneau. ''The reality is, in Alaska, the two issues have been oil and gas, and that's the way it was for the last two years, so that really is her track record,'' Democrat Beth Kerttula said. (Chris Miller/Associated Press File/ March 2007)
By Michael Levenson Globe Staff / September 7, 2008
Text size – +

ANCHORAGE - As Sarah Palin campaigns for vice president, she can tout some significant legislative victories from this vast and rugged state: tightening ethics laws, starting a major gas pipeline, and raising taxes on oil profits, all of which endeared her to voters and forced her to take on the state's powerful oil companies.

But legislators and political observers say Palin has not pushed or signed major bills in other areas such as education, healthcare, and alternative energy, leaving her with no substantive record on issues she has begun to address forcefully on the campaign trail.

Legislators said Palin's first 20 months in office reflect the priorities of a woman whose campaign emphasized trust in government and increasing state revenues from oil and gas concerns rather than bread-and-butter issues like schools and healthcare. While many praise Palin for making good on some of those promises, they say she has not shown much in terest in developing a detailed or broad agenda.

"Increasing taxes on the energy industry: That's the one and only focus she has had, as well as granting the exclusive rights to develop the gas line," said Representative Mike Hawker, a Republican member of the Alaska House, who has been critical of Palin on the pipeline and state spending. "It's one of the frustrations those of us in policy positions have had as we try to go in and define an agenda and work out a direction."

Representative Beth Kerttula, a Democrat who is minority leader of the House, agreed, saying: "The reality is, in Alaska, the two issues have been oil and gas, and that's the way it was for the last two years, so that really is her track record. . . . She has not led on education. She has not led on healthcare. Probably any governor would say you want to do these things. But she hasn't been specific."

Maria Comella, a spokeswoman for the McCain-Palin campaign, said the governor is proud of her record, including a veto of $231 million - 13 percent of the state budget - which she called one of the single largest cutbacks in Alaska's 50 years of statehood.

"Her vision for Alaska was not contained to one or two issues," Comella said. "It was broad in scope, and to her credit, as someone who was able to get things done, she was successful in achieving what she set out to do, in almost everything that she talked about."

Alaska's governor is among the nation's most powerful, in part because the state owns more than a hundred million acres of land and vast oil and metal reserves, said Rick Barrier, the executive director of Commonwealth North, a nonpartisan think tank in Anchorage. Even though the Legislature meets only 90 days a year, there is a tradition of an activist state government, with governors negotiating lucrative development deals.

This means that unlike governors in many states, Palin did not have to slash costs or close budget shortfalls. Rocketing oil prices - which fuel 85 percent of Alaska's revenues - have given the state a projected $5 billion surplus. Last month, Palin used some of the bounty to send $1,200 checks to help Alaskans afford rising fuel costs.

"That was a blessing for her administration to have high oil prices," said Alaska's House speaker, John Harris, a Republican. "Otherwise, she'd be dealing with a deficit."

Palin's priority has been on increasing the state's oil and gas wealth. Ending decades of discussion, she signed a measure to start developing a $30 billion, 1,715-mile natural gas pipeline from Prudhoe Bay to Alberta, Canada, saying it would fuel homes and the Alaska economy for generations.

And at a time when oil company profits reached record highs, she worked with Democrats to increase taxes on those profits, estimating it would bring the state $1.5 billion annually, depending on the price of oil.

Palin has not been as active on other fronts. She has expressed support for school vouchers, home schooling, fewer federal mandates, and teaching creationism alongside evolution. As governor, however, she has not pushed for those issues, instead adopting smaller changes such as a new formula to fund rural schools.

"So far in her administration, education has not been her top priority," said Barbara Angaiak, president of the National Education Association's Alaska chapter. "She cares about education. She comes from a family full of educators, but she's been much more focused on concerns about oil and gas in the state than she has about education so far."

Palin has said that "healthcare must be market- and business-driven," but she has not pushed for big changes in the healthcare system. Instead, she introduced a bill to create a "healthcare information office" to give residents information on quality and cost, and she appointed a task force to recommend other steps.

Dr. Thomas Nighswander, a physician who is a vice president of Commonwealth North, said Alaska has 100,000 uninsured residents, but Palin has been "pretty silent" on healthcare.

"I've never heard her talk about it, and frankly, I think her focus was not in that area," he said. "Her efforts are really focused on the gas pipeline and getting that launched."

Palin released after taking office a state energy plan that called for three steps: short-term relief through the $1,200 checks and a state gas-tax suspension; intermediate steps, which include the development of alternative energy; and a long-term plan, which includes the gas pipeline. She also appointed a sub-Cabinet to review the science of global warming and make recommendations.

She focused, however, almost exclusively on the pipeline, said Rich Seifert, an energy specialist at the University of Alaska at Fairbanks.

At the Republican National Convention last week, Palin acknowledged that drilling for more oil and gas would not solve all of America's long-term energy needs, but said, "Take it from a gal who knows the North Slope of Alaska: We've got lots of both." Raucous delegates applauded, cheering "Drill, baby, drill!"

Legislators said Palin is a hands-off governor, who rarely telephones them or delves into policy. During meetings, she tends to listen and let her deputies field questions, legislators said, adding that that was partly a reflection of Palin spending more time away from the capitol in Juneau and with her family who live 800 miles northwest in Wasilla.

"She's a nice person and she does very well on the stage," said Harris, the House speaker. "When it comes to nuts and bolts types of things, she - I don't think - is quite as successful."

Palin's skills as a communicator have helped her develop an unusual rapport with the Alaskan public, which gives her high marks overall. She has won special praise for living up to her vow during the 2006 campaign to reform state politics, a promise that helped catapult her past a scandal-plagued Republican incumbent and a popular former Democratic governor.

Seizing on voter anger stoked by an FBI investigation into influence-peddling in the capitol, she pushed for and signed ethics legislation that tightened restrictions on lobbyists' gifts, toughened disclosure laws, required ethics training for lobbyists, and banned the use of state aircraft for political purposes.

She also showed a knack for dramatic gestures to shake up government, famously selling her predecessor's state jet. "She promised a style of governing," Hawker said. "She ran on saying we need to have government be more open and responsive to people, and she has done that just fabulously."