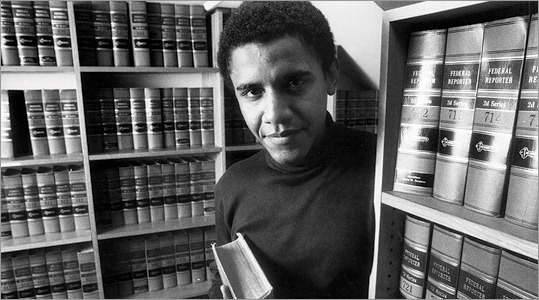 Editor's note: In 1990, Globe reporter Linda Matchan and photographer Lane Turner interviewed 28-year-old Barack Obama, a Chicago community organizer who had just become the first African-American head of the Harvard Law Review. The following is an early glimpse of a rising star.

Barack Obama became the first black president of the influential Harvard Law Review last week, after a marathon 17-hour selection process that pitted him against 18 other candidates. But he says he felt the full significance of the honor only after a rival candidate, also black, embraced him.

"He held onto me for a long time," said Obama, 28, a second-year student at Harvard Law School. "It was an important moment for me, because with that embrace I realized my election was not about me, but it was about us, about what we could do and what we could accomplish."

It is entirely characteristic of Obama, a man of substantial accomplishments, that he would view his success in terms of American blacks and minorities in general rather than as a personal victory.

He points out, for instance, that four of this year's 19 candidates are black, and two of the nine finalists are black women. (In the first 85 years of the law journal's 102-year history, there were only three black members.)

"To some extent, I'm a symbolic stand-in for a lot of the changes that have been made," said Obama, who will function as editor-in-chief of the student-run journal, which is regarded as the leading legal periodical in the country. Its presidency almost always leads to prestigious judicial clerkships after graduation.

"I want to make people aware that although I am benefiting from a lot of attention right now, there is a broader trend: a far greater willingness at this stage of the history of the Review to appreciate the abilities and talents of minorities and women in the legal profession."

It is not that Obama is self-deprecating. On the contrary, he is so exceptionally self-assured and directed -- as when he notes that he sought the presidency because "I felt I'd enjoy having an influence on the course of legal debate in the country" -- that one friend recalls being completely overwhelmed when they met four years ago.

"I thought, 'This guy sounds like he's president of the country already,' " said John Owens, a former co-worker from Chicago, during a telephone interview. "I've never met anyone who could leave that impression after only five minutes."

What seems to motivate Barack Obama is a strong identification with what he calls "the typical black experience," paired with a mission to help the black community and promote social justice.

This is what fueled his unusual path, from childhood in Indonesia, where he grew up, he says, "as a street kid," to adolescence in Hawaii, where he was raised by his grandparents; to college in California and New York, where after graduating he wrote articles for Fortune 500 companies so he could see how the economic system works. He then had a job directing a community organization to advocate for poor blacks in Chicago, then moved on to Harvard Law School, where he hopes to learn more about "the nuts and bolts of how the system works" so he can return to public interest work or electoral politics.

Obama's background is a melange of different cultures. His late father, who was black, was born in the small Kenyan village of Alego, studied at Harvard and Oxford and became a senior economist for the Kenyan government. His mother, who is white, is a Kansas-born anthropologist who now works as a developmental consultant in Indonesia.

His parents met and married in Hawaii and divorced when Obama was 2. His father then returned to Kenya, and Obama was raised, at least initially, by his mother. "To a large extent I roamed around a lot as a kid," he said during an interview in a Harvard Square restaurant.

From the ages of 6 to 10, he lived in Indonesia and attended an Indonesian- speaking school; he kept up his English studies, at his mother's insistence, by waking at 5 a.m. each day to take correspondence courses.

He says many of his friends were "street urchins," and it was here, on the outskirts of Jakarta, that he says he became aware of the implications and realities of poverty, of "the gaps between the have's and have-nots." Although his family was comfortable financially, "we couldn't afford the fancy American schools in Indonesia," Obama said. When he reached fifth grade, his mother, concerned that he would not get an adequate education in Indonesia, sent him to live with his grandparents in Hawaii.

Obama stayed in Hawaii through high school, and it was during this period that he began a regular correspondence with his father, whose heritage was to be a major influence on his life, ideals and priorities.

He says one of his most valued possessions belonged to his Kenyan grandfather, who worked as a cook for the British before the country gained its independence. It was the passport he was required to carry at all times; it described his grandfather, at age 46, as "a boy" and a "good . . . cooperative" cook.

"It is an important artifact for me," said Obama. He said that even though his heritage is one-half white, and although he has had a mixture of influences in his life, "my identification with the -- quote -- typical black experience in America was very strong and very natural, and wasn't something forced and difficult.

"When you are young, your identity is shaped by outside forces as much as internal forces. If you are black and called 'nigger' occasionally, if you listened to Dr. Martin Luther King on TV or saw Malcolm X make a speech, your whole environment starts telling you what you are."

Those close to Obama -- tall, reed-thin, soft-spoken -- describe him as a compulsive worker, though they are unsure what it is, at bottom, that has inspired his single-minded concern for social justice.

"He has been like this as long as I can remember," said his half-sister Maya Soetoro, a student at New York's Barnard College. "I wish I could shed light on exactly what has made him so old at such a young age."

In college, he specialized in international relations at Occidental College in Los Angeles and, for his final two years, at Columbia University in New York. He transferred, he said, "because I was concerned with urban issues and I wanted to be around more black folks in big cities."

After short stints as a business journalist and as an advocate for a Harlem-based public interest research group, he conducted what he refers to as a "nationwide search" for community-based social action work with a liveable salary.

He found it in Chicago. He became the director and sole paid employee of the Developing Communities Project, a church-based advocacy organization for low- and middle-income blacks. His annual salary was $13,000. By the time he left, the organization had 13 employees and a solid record of accomplishments, from the removal of asbestos in public housing units to education counseling for disadvantaged youths.

Obama plans to return to Chicago after graduation -- "I've finally found a home," he said, smiling -- and intends to resume community work and possibly to enter politics.

"Having had access to the system, to a language that is sometimes foreign" to blacks, Obama said, "I have a certain mission to make sure that the gifts I've received are plowed back into the community."