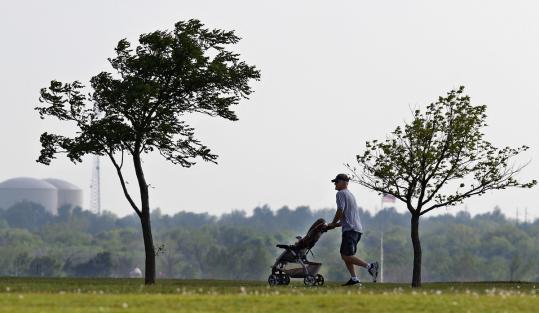 A man in Oklahoma City jogged with his granddaughter last Monday. Temperatures in the lower 48 states were 6 degrees higher than average for the first three months of the year. (Sue Ogrocki/Associated Press)
By Seth Borenstein Associated Press / April 9, 2012
Text size – +

Temperatures in the lower 48 states were 8.6 degrees above normal for March and 6 degrees higher than average for the first three months of the year, according to calculations by the National Oceanic and Atmospheric Administration. That far exceeds the old records. The magnitude of how unusual the year has been in the U.S. has alarmed some meteorologists who have warned about global warming. One climate scientist said it’s the weather equivalent of a baseball player on steroids.

In Alaska, a record high -- of snow

Inundated with nearly double the snow they are used to, Anchorage residents have been expecting to see this season’s snowfall surpass the record of 132.6 inches set in the winter of 1954-55.

The 3.4 inches that fell by Saturday afternoon brings the total to 133.6 inches. Shaun Baines, a National Weather Service meteorologist, said forecasters do not expect more than an inch of additional accumulation.

Before a dumping of wet snow Friday, none had fallen since mid-March, and the seasonal measure hovered at 129.4 inches, or nearly 11 feet. The halt gave residents a chance to clear their snow-laden roofs and city crews an opportunity to widen streets squeezed by mountains of snow.

Extreme weather has hit not only Alaska. It has also struck the lower 48, where the first three months of 2012 has seen twice the normal number of tornadoes and one of the warmest winters on record.

Two different weather phenomena - La Nina and its northern cousin the Arctic Oscillation - are mostly to blame, meteorologists say. Global warming could also be a factor because it is supposed to increase weather extremes, according to climate scientists.

Even by Alaska standards, Anchorage has been walloped by snow. City snow-removal crews have worked around the clock to clear roadways and haul more than 2.5 million cubic yards of snow to the city’s six snow-disposal sites, which are close to capacity. Alan Czajkowski, maintenance and operations director, said such a volume would almost fill the Louisiana Superdome in New Orleans.

That is not even counting the loads disposed of by state crews.

At the height of the snow overload, many residential streets were rimmed by snow-walled canyons that towered over fences and shielded homes. Some roofs collapsed, mostly on older commercial buildings with flat roofs.

The collapses caught the attention of many residents worried the same thing would happen to their roofs, a concern that turned into booming business for commercial snow-removal outfits.