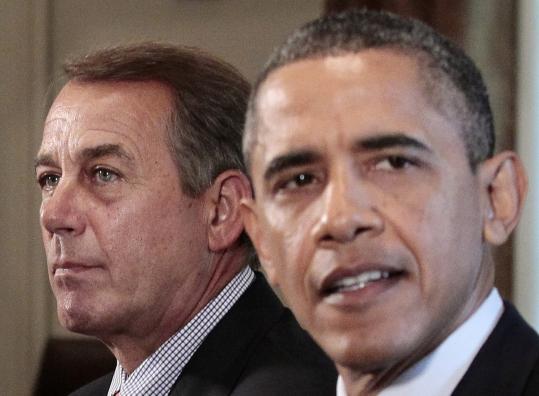 WASHINGTON - President Obama described a debt-crisis session with congressional leaders yesterday as “very constructive’’ but said the parties were still far apart on deficit reduction proposals. He said he would reconvene the negotiators on Sunday.

Yesterday’s meeting came amid signals that the White House was willing to reduce costs for major benefit programs including Social Security and Medicare, while Republicans indicated they might consider new steps to raise government revenue.

“People were frank,’’ Obama said, just moments after adjourning the 1 1/2-hour meeting with the eight lawmakers who make up the bipartisan leadership of Congress.

Obama acknowledged that the ultimate agreement will not satisfy partisans, but he said the deal would require both Republican and Democratic votes to pass Congress.

Obama met with the leaders of both parties around a table in the White House Cabinet Room as they struggled to reach a deal on raising the government’s debt limit with less than four weeks remaining before a possible first-ever default on US financial obligations.

The Obama administration has said the government needs to raise the current $14.3 trillion debt limit by Aug. 2.

Returning to the Capitol after the meeting, House Speaker John A. Boehner said: “We had a conversation. It was productive.’’

While discussions on trimming the costs of entitlement programs had centered on Medicare, the health care program for older Americans, the White House is revisiting a proposal raised earlier in the negotiations to change the inflation measurement used to calculate Social Security cost-of-living adjustments, thus reducing annual increases, officials said yesterday.