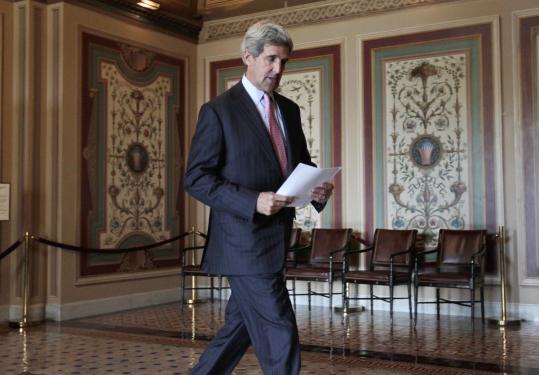 Senator Kerry said “the country is on the strongest footing’’ when the president and Congress speak with one voice. (J. Scott Applewhite/ Associated Press)
By Theo Emery Globe Staff / June 22, 2011

The senators, both high-profile members of the chamber and former nominees for the presidency, sought to project a united front in support of the NATO-led action to protect Libyan civilians from Moammar Khadafy’s forces and curtail the dictator’s ability to wage war.

“The last message any United States senator wants to send is that this madman need only wait us out because we are divided at home,’’ said Kerry, Democrat of Massachusetts.

The resolution — designed to unify lawmakers from both parties and provide Congress a voice on the policy — would curtail unilateral presidential actions. For example, it would give a one-year authorization for US in volvement in the NATO action, and states that the Senate would be opposed to introducing American ground forces in Libya, a stance Obama also holds.

While it has support from Senate leaders of both parties, it’s unclear whether the resolution would halt bipartisan threats in the House to restrict the president’s actions in Libya by withholding funds.

Some legal scholars say the resolution, despite assurances from McCain and Kerry, does not limit the current mission.

“It looks like it was drafted in the State Department. It gives the president everything he would possibly want and imposes no meaningful restrictions,’’ said Michael J. Glennon, a scholar at Tufts University’s Fletcher School of Law and Diplomacy who helped lawmakers draft the 1973 War Powers Resolution.

That act, which followed what was perceived as a constitutional power grab by presidents Johnson and Nixon during the Vietnam War, requires presidents to receive congressional approval for military actions within 60 days of initiating hostilities.

With the NATO mission entering its fourth month, some members of Congress — conservatives such as House Speaker John A. Boehner and liberals such as Dennis Kucinich of Ohio and Michael E. Capuano of Somerville — have denounced the administration for not seeking congressional permission under the act.

Late yesterday, Boehner, who has threatened to cut off funding for the mission, said the House will take up two resolutions: one mirroring the Kerry-McCain version and a second that would end most US involvement, although it would permit noncombat roles, such as search and rescue, aerial refueling, and surveillance. House Republicans will discuss the resolutions today, he said.

Boehner said that he had no desire to damage the NATO alliance but added that the White House “must not ignore its obligations to the American people and the laws of this country.’’

Last week, the administration sent a report to lawmakers stating the actions did not fall under the War Powers provisions because US forces, which help enforce NATO’s no-fly zone over the Libya, were not involved in “hostilities.’’ The White House contends that US troops play a largely logistical role in support — doing surveillance, attacking targets with remote-controlled drones, and providing refueling for NATO aircraft, for example — and are generally not imperiled by Libyan forces.

That argument fueled anger on and off Capitol Hill. “It is clear that the Obama administration’s claim that targeted bombings, missile strikes, and other military actions in Libya do not constitute ‘hostilities’ under the War Powers Resolution is not credible,’’ Boehner said.

Kerry, who became a leading antiwar figure after earning a Silver Star and Purple Heart in Vietnam, disagreed, saying he supported the administration’s rationale. Nonetheless, he said the resolution is essential because the president and Congress should be united in demonstrating resolve in the conflict to the American public, allies, and Khadafy. Both Kerry and McCain, Republican of Arizona and a prisoner of war for five years in Vietnam, were early advocates of a Libyan no-fly zone.

“I firmly believe the country is on the strongest footing when the president and the Congress speak with one voice on foreign policy matters,’’ said Kerry.

In a later e-mail, the senator contended it limits the United States to a supporting role and “clearly and unequivocally puts the Senate on record opposing the use of American ground troops in Libya.’’

Glennon, however, said the statement on ground troops is meaningless. In the absence of explicit language banning ground forces, nothing in the resolution would actually prevent the deployment of troops to Libya, he contended.

Harvard Law School professor Jack Goldsmith, who served as head of the Office of Legal Counsel during the Bush administration, wrote on his legal blog yesterday that the resolution would simply validate the Obama administration’s approach.

“Even if it only passes the Senate and not the House (where I doubt it could pass in this form), the president will use it as political if not legal support for his policies. The White House and presidential unilateralists should be happy with this development,’’ he wrote.

Senate majority leader Harry Reid, Democrat of Nevada, said he has enough votes to pass the resolution, which has support from leaders of both parties, including Richard J. Durbin, an Illinois Democrat, and his GOP counterpart, Jon Kyl of Arizona. Lindsey Graham, a South Carolina Republican who is a powerful voice for US military matters, also supports the measure, as does Connecticut independent Joseph Lieberman. Debate could start as soon as this week.

One prominent member of the Senate conspicuously absent from the resolution’s supporters is Republican Richard Lugar of Indiana, Kerry’s counterpart on the Foreign Relations Committee. Lugar has been critical of the administration’s efforts.

A spokesman for Senator Scott P. Brown, a Massachusetts Republican, said that Brown had not had a chance to see the resolution language. Brown said the administration needed to articulate US goals more clearly.

“I believe the Obama administration should clearly define to Congress and the American people our goal in Libya and the strategy for achieving it.’’