Seeking to say who stands for Israel 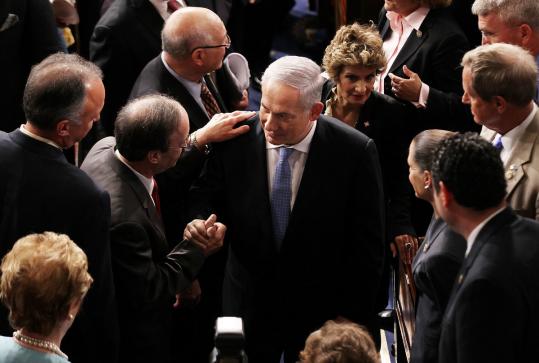 Members of Congress greeted Benjamin Netanyahu yesterday after the Israeli prime minister spelled out his nation’s conditions for a compromise with Palestinians. A10. (Alex Wong/Getty Images)
By Farah Stockman Globe Staff / May 25, 2011

WASHINGTON — While disagreements between the White House and the Israeli government are raising questions in Washington over what it means to be “pro-Israel,’’ today in Boston the debate will play out in a quieter way.

The Jewish Community Relations Council of Greater Boston will vote on whether J Street, a fledging Jewish advocacy group that promotes vigorous US actions to help create a Palestinian state, should be stripped of its membership. J Street is widely expected to be allowed to remain one of the 42 organizations represented on the council. But the discussion over J Street’s membership — and whether the group is truly “pro-Israel’’ — reflects a passionate debate among American Jews over the meaning of the term.

“The community is looking at itself right now and grappling with the issue of: What does it mean in this day and age to be a supporter of Israel?’’ said Alan Ronkin, the interim executive director of the council.

The vote comes at a crucial time. Yesterday in Washington, Israeli Prime Minister Benjamin Netanyahu told Congress that Israel is prepared to accept “painful compromises’’ but said Israel must be allowed to keep large settlement blocs in the West Bank, a military presence on the Jordan River and control over an undivided Jerusalem — demands that Palestinians have said are impossible to accept.

Netanyahu’s speech, which came on the heels of public disagreements with President Obama over how peace talks should proceed, underscored an emotional divide among American Jews.

For decades, many mainstream Jewish organizations, including the powerful American Israel Public Affairs Committee, have interpreted support for Israel to mean backing the policies of the democratically elected Israeli government, and taking any disagreements that arise behind closed doors.

But the Washington-based J Street was formed in 2008 to publicly advocate for policies that it believes are in Israel’s long-term interests, even if they are at odds with the Israel’s current leadership.

“J Street has become a lightning rod,’’ said Steve Maas, editor of The Jewish Advocate, the oldest Jewish newspaper in the Boston area, which conducted an online opinion poll last month asking if J Street should be allowed to remain on the Jewish Community Relations Council of Greater Boston.

The unscientific poll, which allowed people across the country to vote, attracted 10 times as much Internet traffic as previous polls, Maas said, with 1,653 voting that J street should be expelled and 1,005 voting that the group should be allowed to remain. The online opinion poll has no relationship to the council’s vote today, but is “a measure of intensity’’ of feeling, he said.

J Street has supported Obama’s calls for a settlement freeze in the West Bank, and opposes continued Israeli construction in East Jerusalem on land that Palestinians hope will become the capital of a future Palestinian state.

J Street’s members say true support for Israel means trying to ensure that Israel doesn’t harm its prospects for peace, which they see as the only way to secure Israel’s future in the long-term.

“Its hard to see what is so controversial about friends not letting friends drive drunk,’’ said Daniel Levy, a former Israeli peace negotiator now at the Washington-based New America Foundation who is one the founding figures of J Street.

J Street’s message has attracted more than 13,000 supporters in Massachusetts, according to Janette Hillis-Jaffe, J Street’s New England political director. Boston is home to one of the three largest chapters the country, along with New York and San Francisco.

But the group has also drawn fierce criticism for accepting donations from people who have vocally criticized Israel, including billionaire George Soros. J Street’s president, Jeremy Ben-Ami, initially said Soros had not given funding, but was forced to admit it after J Street’s tax return was leaked to the press.

J Street has also been criticized for inviting the executive director of Jewish Voice for Peace, an organization that advocates boycotting goods made in Israeli settlements, to debate her ideas at its annual conference earlier this year. The boycott, divest, and sanctions movement, known as BDS, is widely considered outside the Jewish mainstream and incompatible with being “pro-Israel.’’ J Street’s website says it does not support boycott or divestment initiatives, but that it believes in open debate.

Opposition to J Street became more vocal last fall, when Temple Beth Avodah in Newton canceled a speech by Ben-Ami. Around the same time, CAMERA, an Allston-based media watchdog group formed to monitor how Israel is portrayed in the press, began to raise questions about J Street’s membership on the Jewish Community Relations Council of Greater Boston, an organization that aims to build “a broad network of support for Israel in its quest for a secure and lasting peace,’’ according to its website.

The council’s bylaws require members to have been in existence for three years, but J Street sidestepped that requirement by taking over a seat that had been held by an allied organization, Brit Tzedek v’Shalom, an arrangement that CAMERA says is improper.

But Alex Safian, CAMERA’s associate director, made it clear that the group also opposes J Street because of its funders and its invitation to Jewish Voice for Peace.

“They support BDS and they do it in an underhanded way,’’ Safian said. “This is a major problem with their claim that they are pro-Israel and pro-peace.’’

Calls for J Street’s removal prompted the council’s membership committee to review all its members. The committee recommended that all but one defunct group be allowed to stay, said Ronkin.

The council will vote on those recommendations today. Should the council reject them and seek J Street’s removal, J Street would be given an opportunity to defend itself and a final vote would take place at a later date, Ronkin said.

Safian said that if J Street remains on the council, CAMERA might leave.

Hillis-Jaffe, J Street’s New England director, said she is confident that the group will be allowed to remain and that CAMERA should also stay.

She said the debate over J Street’s membership has sparked the very discussions that the group was founded to raise.

“For too long the loudest voices on this issue have come from the right end of the political spectrum,’’ she said. “They have had a very narrow definition of what it means to be pro-Israel.’’

But others say discomfort with J Street is rooted in the fear that betting on peace could prove a risky gamble.

Robert Leikind, director of the American Jewish Committee in Boston, said that J Street should remain on the council. But he also said that many American Jews rightly question whether they know better than Israelis how to keep Israel secure.

“There is a philosophical divide within the community about what is the appropriate role for the American Jew,’’ Leikind said. “It is not just another policy debate. It is an existential worry.’’