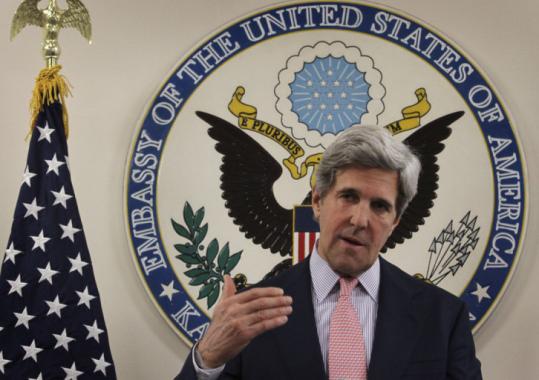 Senator John Kerry made it clear during a press conference in Kabul yesterday that patience with Pakistan was running thin. (Musadeq Sadeq/ Associated Press)
By Joshua Partlow Washington Post / May 16, 2011

KABUL — The United States has reached a “critical moment’’ in its relationship with Pakistan after the killing of Osama bin Laden, Senator John F. Kerry said yesterday before flying to Pakistan to address what he called “very disturbing’’ evidence of the Pakistani government’s knowledge of insurgent sanctuaries.

Kerry, chairman of the Senate Foreign Relations Committee, has emerged in the past few years as an important envoy for Afghanistan and Pakistan during times of crisis. The Massachusetts Democrat is the most senior US official to travel to Pakistan since the raid on the Al Qaeda leader’s compound.

Bin Laden’s killing this month in a military town in Pakistan has generated perhaps the most important crossroads yet for US policymakers: a chance for the United States to decide whether it will continue to work with a Pakistani government it suspects of supporting Taliban factions, reduce aid, or make other changes to the relationship.

Pakistan is angry that it was not told about the raid until after it was completed. That prompted accusations that its sovereignty had been violated.

Kerry made clear yesterday that patience was running thin in Washington after it was discovered that the terror leader had been living for years in a compound in Abbottabad, a city that is home to Pakistan’s equivalent of West Point. But he also said he was hopeful the dispute could be resolved.

“I think for the moment we want to be hopeful and optimistic that we can work our way through this, get over this hiccup,’’ Kerry said in a news conference at the US embassy in Kabul.

Kerry did not tip the Obama administration’s hand on how it plans to proceed with Pakistan. But he said some of his congressional colleagues “have deep reservations about whether or not Pakistan is committed to the same goals, or prepared to be a full partner in pursuing these goals.’’

“Yes, there are insurgents coming across the border, yes they are operating out of North Waziristan and other areas of the sanctuaries, and yes, there is some evidence of Pakistan government knowledge of some of these activities in ways that is very disturbing,’’ Kerry said. When he talks with Pakistani officials , he said, “that will be, without any question, one of the subjects of conversation.’’

“This is not a moment for anything except very sober, serious discussion with an understanding that there’s a lot at stake,’’ Kerry said.

House and Senate lawmakers have urged cutting billions of dollars in aid to Pakistan.

It also wants assurances that nuclear-armed Pakistan does not succumb to rising Islamic extremism and its own tenacious insurgency, which has cost the lives of thousands of soldiers and civilians.

Pakistan’s failing economy desperately needs American and other foreign aid. Since 2002, Pakistan has received more than $20 billion from the United States, making the country one of the largest US aid recipients, according to the Congressional Research Service. Nearly $9 billion of that has been in the form of reimbursements for Pakistan’s costs to support the US-led military campaign in Afghanistan.

Kerry, who has been a supporter of Pakistan in the past, spent the weekend in Afghanistan meeting with President Hamid Karzai, his Cabinet, and US military officials pursuing the campaign against the insurgency.

He also said that bin Laden’s death may present a new opportunity for reconciliation with the Taliban in Afghanistan, and for revising the American role in Afghanistan.

That could include reducing troop levels and war spending, which would help address Afghanistan’s concerns about civilian casualties in coalition operations, while allowing Washington to shift military resources to areas where security needs are greater.

Kerry, who traveled to the border town of Khost as well as to the northern city of Mazar-e-Sharif during his two-day visit to Afghanistan, said he believes bin Laden’s death has added momentum to the process of reconciliation and potential for negotiations with the Taliban.

Afghan officials told him the Taliban have shown “heightened interest’’ in negotiations since bin Laden’s death, but he didn’t go into specifics. He suggested the Taliban “could be a part of a different makeup of a new Afghanistan.’’

Kerry lauded Pakistan’s help in the past in fighting terrorism, including allowing American intelligence personnel to operate in Pakistan, which he said had helped the United States track bin Laden.

Kerry said that during his visit to Khost he was briefed on Taliban and insurgent safe havens across the frontier in North Waziristan, used to launch attacks.

Pakistani leaders, military officials, the Parliament, and Islamic hard-liners have criticized frequent US drone strikes. Parliament has threatened to stop US and NATO supply convoys if the strikes continued.

A prominent hard-line Islamist leader with suspected militant ties drew at least 4,000 people to a rally yesterday in Lahore, Pakistan, in support of bin Laden and against the United States.

Hafiz Saeed, the leader of Jamaat-ud-Dawa, called bin Laden a martyr and demanded the Pakistani government break ties with the United States for killing him.