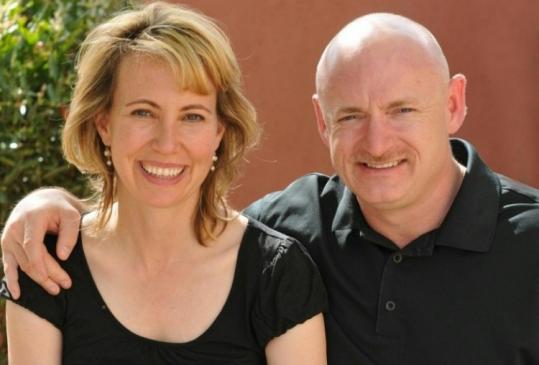 Documents filed in the US District Court in Phoenix indicated that evidence seized from Loughner’s home showed he had planned to kill Representative Gabrielle Giffords, who was in critical condition with a gunshot wound to the head.

FBI special agent Tony M. Tayler Jr. said in an affidavit supporting the charges that investigators found in a safe in Loughner’s home an envelope with the handwritten words, “I planned ahead,’’ “my assassination,’’ and “Giffords.’’ The details of the envelope were not disclosed.

Loughner purchased the semiautomatic Glock pistol used at the shooting at Sportsman’s Warehouse in Tucson on Nov. 30, the court documents said. The documents also indicate the suspect had previous contact with the congresswoman.

Found in the same safe was a letter from Giffords thanking Loughner for attending a 2007 “Congress on Your Corner’’ event, like the one she was holding on Saturday morning when she was attacked.

Along with being accused of deliberately trying to kill Giffords, Loughner was charged with the killing and attempted killing of four United States government officials, among them US District Judge John M. Roll, 63, who was killed; congressional aide Gabriel Zimmerman, 30, also killed; and congressional aides Pamela Simon and Ron Barber, who were wounded.

The shooting of the other 15 people who were wounded or killed would be state crimes rather than federal crimes; as of yesterday afternoon no state charges had yet been filed.

The others who died in the shooting, but were not US officials, were identified as: Christina Taylor Green, 9; Dorothy Morris, 76; Phyllis Schneck, 79; and Dorwin Stoddard, 76.

The authorities released 911 tapes of the minutes after the shooting in which caller after caller, many of them out of breath, reported multiple shots being fired, and people falling, too many to count.

The director of the FBI, Robert S. Mueller III, who traveled to Tucson from Washington to oversee the shooting investigation at President Obama’s request, said at a news conference that an intensive investigation was under way to determine “why someone would commit such a heinous act and whether anyone else was involved.’’

The president also called on Americans to observe a moment of silence at 11 a.m. today to honor victims of the shooting.

Giffords, a Democrat who represents Arizona’s Eighth District, has been able to respond to simple commands. Her doctors described themselves as “cautiously optimistic’’ about her recovery.

At a news conference at University Medical Center, the congresswoman’s doctors said she was the only victim of Saturday’s shooting to remain in critical care at the hospital. Thirteen others were wounded.

Doctors said Giffords was lucky to be alive but would not speculate about the degree of her recovery, which they said could take months or longer.

“Overall this is about as good as it’s going to get,’’ said Dr. Peter Rhee, the chief of trauma surgery at University Medical Center, where Giffords was brought by helicopter from the shooting scene outside a supermarket north of Tucson. “When you get shot in the head and a bullet goes through your brain, the chances of you living are very small, and the chances of you waking up and actually following commands is even much smaller than that.’’

Dr. G. Michael Lemole Jr., the chief of neurosurgery who operated on Giffords, said the bullet had traveled through the entire left side of her brain “from back to front’’ but said it had not crossed from one side of the brain to the other, nor did it pass through some critical areas that would further diminish her chances of recovery.

The doctors said Giffords, 40, was in a medically induced coma but that they had woken her several times to check her responsiveness. While the doctors said they were extremely pleased with the progress of her treatment, they cautioned that it was too soon to make any predictions.

Darci Slaten, a spokeswoman for the medical center, said the congresswoman’s husband, astronaut Mark E. Kelly, was with her, as were her parents and two stepchildren.

As the doctors provided the update yesterday, law enforcement authorities tried to piece together what prompted the shooting rampage.

The sheriff’s office said a search for a possible second suspect person had ended. A man seen in a security video shortly before the shooting began had been found and interviewed and cleared of any involvement.

Investigators said the man was a taxi driver who drove the suspected gunman to the scene. Upon arriving, the passenger said he did not have change, and he and the taxi driver went into the supermarket for change. The two then walked out together and separated.

At a news conference, Sheriff Clarence W. Dupnik of Pima County described a chaotic scene of terror and heroism as the shots rang out. He said one woman who was injured in the shooting fought to wrestle a magazine of ammunition away from the gunman as he tried to reload.

The gunman succeeded in reloading, the sheriff said, but was then tackled to the ground. Officials, who did not name the woman, said the attack could have been more devastating had she not tried to stop the gunman.

The suspect was apparently at a similar meet-and-greet event with Giffords in 2007, the sheriff said, but he did not know anything more about the event.

While the authorities have not ascribed any specific political motivation to the shootings other than to say that Giffords was clearly the intended target, the political reverberations continued to be felt across the nation and in Washington, where flags over the Capitol were flown at half-staff in memory of Zimmerman, the slain staff member.

The new House speaker, John A. Boehner of Ohio, who ordered the flags lowered, decried the attack in an appearance early yesterday in his hometown of West Chester, and said it was a reminder that public service “comes with a risk.’’

Boehner urged prayers for the victims and also told his House colleagues to persevere in fulfilling their oath of office.

“This inhuman act should not and will not deter us,’’ he said. “No act, no matter how heinous, must be allowed to stop us.’’

However, he said the normal business of the House for the coming week had been postponed “so that we can take necessary action regarding yesterday’s events.’’ That business had included a vote to repeal the health care overhaul.

Loughner, who was in federal custody, refused to cooperate with investigators and invoked his Fifth Amendment rights on Saturday, the sheriff’s office said.

Loughner had exhibited increasingly strange behavior in recent months, including ominous Internet postings — at least one showing a gun — and a series of videos in which he made disjointed statements on topics like the gold standard and mind control.

Pima Community College officials said he had been suspended for conduct violations and withdrew in October after five instances of classroom or library disruptions that involved the campus police.

In a basic algebra class last summer, Loughner exhibited a pattern of behavior marked by hysterical laughter, bizarre non sequiturs, and aggressive outbursts, said Ben McGahee, the class’s instructor. McGahee took to glancing out of the corner of his eye when he was writing on the board for fear that Loughner might do something.

A student in the class, Lynda Sorenson, 52, wrote an e-mail to a friend expressing her concerns.

“We do have one student in the class who was disruptive today, I’m not certain yet if he was on drugs (as one person surmised) or disturbed. He scares me a bit,’’ Sorenson wrote in an e-mail in June that was forwarded to The New York Times yesterday. “Hopefully he will be out of class very soon, and not come back with an automatic weapon.’’

As the investigation intensified yesterday, police were still at the scene of the shooting. Investigators have described the evidence collection as a painstaking task given the large number of bullets fired and victims hit.

Giffords, widely known as Gabby, had been speaking to constituents about 10 a.m. Saturday in a store alcove under a large white banner bearing her name when the gunman surged forward and began firing.

The event, called “Congress on Your Corner,’’ was outside a supermarket northwest of Tucson and was the first opportunity for constituents to meet with Giffords since she was sworn in for a third term Wednesday.

Giffords was talking to a couple about Medicare and reimbursements, and Roll had just walked up and shouted “Hi,’’ when the gunman approached and shot the judge, said Mark Kimble, a Giffords aide.