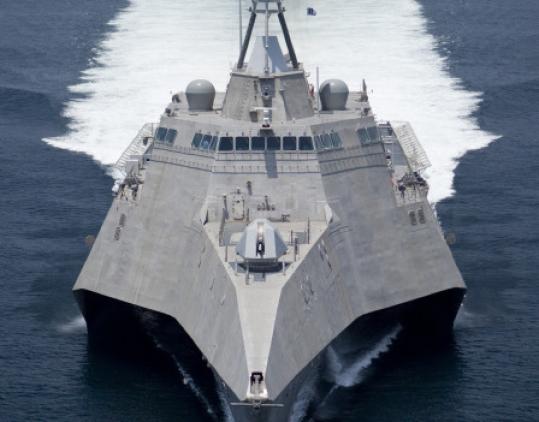 WASHINGTON — Senator John F. Kerry and Navy officials are pushing efforts to double an order of coastal combat ships, a plan that would dramatically expand a problem-plagued program while adding 500 jobs at a computer systems plant in Pittsfield.

“We’re anxiously waiting for it,’’ said Mayor James Ruberto of Pittsfield. “It would be just an incredible Christmas present for Pittsfield and the Berkshires.’’

But Kerry, a Massachusetts Democrat, and other backers in the Senate are running out of time in the congressional lame-duck session. Authorization for the 10 additional ships has been approved by the House as part of a budget bill, which includes about $1 billion to keep the program going, but it has yet to be approved by the Senate, where its fate is uncertain.

The Navy faces a deadline of tomorrow before bids on the next round of ships expire, making congressional action imperative before then.

Critics of the program, including Republican John McCain, contend that cost overruns and technical problems in the building process make such an expansion unwarranted. They point to reports last week from the Government Accountability Office and Congressional Research Service, which said the four ships the Navy already bought still aren’t fully tested and working properly.

Each ship is expected to cost $500 million, up from an earlier estimate of $215 million.

The vessels, called littoral combat ships, are designed for tasks associated with modern warfare near land, including hunting submarines, sweeping for mines, and defeating terrorists and pirates in small boats.

There are two competing teams of defense contractors seeking to build the ships. One includes and is led by Austal, a company that owns a shipyard in Alabama, where the ships would be built. The other team is led by , which would build in Wisconsin.

The Navy already has authorization to build 10 new ships. Under the legislation backed by Kerry and the Navy, each of the teams would get contracts for 10 ships. General Dynamics said that guarantee would bring 500 new jobs at its Pittsfield computer manufacturing plant, which makes sophisticated electronic systems and employs about 1,000 people.

McCain issued a scathing statement last week questioning the expense and pointing to the past production troubles. “From its stewards in Congress, both the taxpayer and war fighter deserve more,’’ McCain said.

But Kerry said the Pentagon would save money by placing a larger order.

“We’re talking about increased stability for the nation’s shipbuilding industrial base, which will lead to substantial savings,’’ Kerry said. “That’s a good deal for taxpayers and a good move for our defense.’’

If Congress doesn’t act, the Navy will still be able to buy the 10 ships already approved. But in the absence of legislation giving both builders part of the action, there is the chance the contract would go to Lockheed Martin and not the Austal-General Dynamics group with the Pittsfield plant.

In a twist that demonstrates the shifting fortunes involved at the intersection of politics and defense contracting, the Bath Iron Works shipyard in Maine, which is owned by General Dynamics, would be hurt by the proposal.

Bath could have competed for a batch of five littoral ship contracts that would be awarded in 2012. But the 20-ship plan would split the work between Lockheed Martin and the Austal-General Dynamics team, so that batch of five would not be put out to bid and Bath would be frozen out.

“We’re standing by, waiting to see what the Congress is going to do with this thing,’’ Bath spokesman Jim DeMartini said.

The push to get shallow-water combat vessels began shortly after the terrorist attacks on Sept. 11, 2001. The Navy said it needed more versatile and agile ships that could fight closer to shore. They could travel at high speeds — up to 40 knots — and were designed with weapons systems that could be swapped in and out depending on warfare needs.

The Navy said it wanted to add a few of the ships to its fleet each year, eventually fielding 55 ships.

The Pentagon so far has ordered four ships, two from the Lockheed team and two from the General Dynamics consortium. Since the first two contracts were awarded in 2004, the cost of building the ships ballooned from estimates of roughly $215 million each to more than $500 million each in 2009 at both builders.

The Government Accountability Office has also identified other problems: crew training takes an average of 484 days, significantly longer than for comparable positions on other ships; the Navy’s maintenance plan may be unrealistic; and a comprehensive risk assessment has not been completed.

“Until mission package and operational testing progresses and key mine countermeasures, surface warfare, and antisubmarine warfare systems are proven effective and suitable onboard seaframes, the Navy cannot be certain that the LCS will deliver the full capability desired,’’ the GAO wrote in a report issued on Wednesday.

But Kerry said the plan he is backing would guarantee Massachusetts jobs.

“This contract can bring hundreds of desperately needed jobs while providing our Navy with a state-of-the-art fleet and advanced combat control systems,’’ he said. “That’s a win-win if I’ve ever seen one.’’

He and other elected officials, including Representative John Olver and Governor Deval Patrick, have been out to tour the General Dynamics plant in Pittsfield. All have had conversations with Pentagon officials, pleading for the new jobs in the area.

“I’m trying not to let any opportunity go by us,’’ Patrick said in an interview this week.