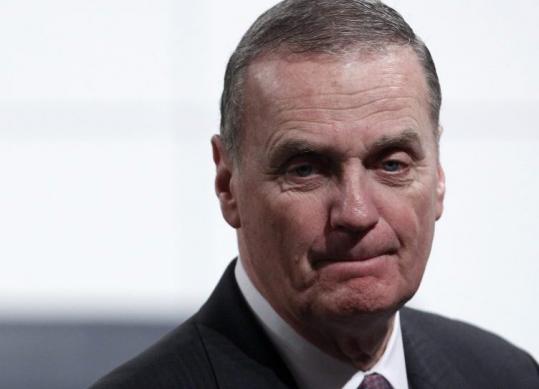 The departure of James L. Jones, national security adviser, had been expected at the end of the year but came earlier. (Michaela Rehle/ Reuters)
By David E. Sanger and Helene Cooper New York Times / October 9, 2010

WASHINGTON — In speeding the replacement of the national security adviser, General James L. Jones, with his deputy, a foreign policy aide with deep political experience, President Obama has given civilian and political advisers a bigger voice in the hard choices of the coming months, including how quickly to withdraw US troops from Afghanistan.

The long-rumored departure of Jones, a retired Marine commandant who never struck a close bond with his boss, does not necessarily signal a big swing in administration policy, partly because Donilon has been running the show for months.

But it does portend a bigger voice for Obama’s political and civilian advisers. Although Donilon is steeped in national security, his political skills and connections to Capitol Hill are well known enough that he was rumored just weeks ago to be a candidate to succeed Rahm Emanuel as White House chief of staff .

Jones’s exit had been expected at the end of the year, but it came earlier, administration officials said, after the White House became annoyed by the appearance of quotations attributed to Jones in Bob Woodward’s book “Obama’s Wars.’’

Donilon’s reminders inside the White House, that the US public has limited patience with the Afghan war and that the country’s goals should match its capabilities, are likely to loom large in the two strategy reviews ahead, one in December and another next summer, when troops are to begin leaving Afghanistan.

In running the foreign policy debates at the White House, Donilon has at times been a controversial figure, especially inside the Pentagon, where he angered many officers and senior officials during the review of Afghanistan and Pakistan policy in the fall of 2009. That debate pitted the nation’s top military officers, along with Secretary of Defense Robert M. Gates and Secretary of State Hillary Rodham Clinton, who sought a heavy troop presence for a prolonged period, against a range of the president’s political advisers, including Emanuel and Vice President Joe Biden.

Donilon, according to officials who witnessed the exchanges, repeatedly challenged the military to justify the need for large numbers of troops over a period of a decade or more, finally cautioning the president that a policy of what he termed “endless war’’ was not wise or politically sustainable. According to Woodward’s book, tempers flared and the debate became so personal that Gates warned that choosing Donilon as the next national security adviser would be a “disaster.’’

In a telephone interview yesterday, Gates acknowledged tensions but said he believed that Donilon had “run a good process’’ at the White House and that the choice of someone with a foot in politics and foreign policy was “a return to the norm’’ after having a former general in the job.

“There were some issues and concerns that grew out of the AfPak review,’’ Gates said, declining to be specific. “Tom called me when it was over, and asked if we could meet privately. We did, we cleared the air, and things ever since have been fine.’’

During the Afghanistan review, Donilon had similarly testy relations with Admiral Mike Mullen, chairman of the Joint Chiefs of Staff, who issued a statement yesterday saying that he wished Donilon well and looked forward to working with him.

Inside the White House, Donilon has spoken often of the need to conduct a “rebalancing’’ of US foreign policy, devoting renewed attention to great power relationships and America’s long-term position in Asia.

At age 55, Donilon has taken an unusual route to the national security adviser post.

A native of Providence, he worked as a political aide for Jimmy Carter and Walter Mondale, helped manage Democratic National Conventions, and served in the State Department during Bill Clinton’s presidency. A lawyer, Donilon served for years as executive vice president at , the mortgage finance company taken over by the government during the economic crisis.

He has long been close to Vice President Joe Biden; Donilon’s wife, Cathy, is chief of staff to the vice president’s wife, Jill; and his brother, Michael, is an adviser to Biden. Another brother, Terrence, oversees communications and public affairs for the Roman Catholic Archdiocese of Boston and serves as Cardinal Sean P. O’Malley’s spokesman.

Donilon’s role as deputy national security adviser will be filled, according to a White House official, by another foreign policy aide with deep connections to Capitol Hill: Denis R. McDonough, now the National Security Council’s chief of staff.