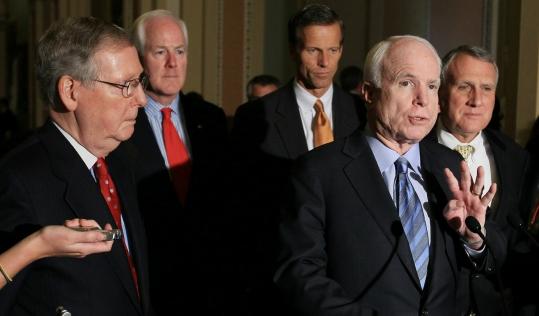 Democrats fell four votes shy of the 60 votes needed to break a GOP filibuster — which included Senator Scott Brown of Massachusetts — that prevented consideration of the overall bill.

The defeat is expected to push any efforts to repeal “don’t ask’’ past mid-term elections. For gay-rights advocates and Democratic leaders, this means that a lame-duck session could represent a last stand for a repeal, because election gains expected for Republicans could extinguish any chances in a new Congress.

“Today’s Senate vote was a frustrating blow to repeal this horrible law,’’ said Aubrey Sarvis, executive director of the Servicemembers Legal Defense Network, which provides legal assistance to service members ousted through the ban. “Time is the enemy here. We now have no choice but to look to the lame-duck session, where we’ll have a slim shot.’’

Brown said his vote against considering the bill was not necessarily an endorsement of keeping the “don’t ask’’ policy, but a protest against Democratic political maneuvering to limit debate while adding unrelated amendments.

“Unfortunately what has traditionally been a very open and bipartisan process has in fact evolved into a dynamic display of political grandstanding. My question is, ‘What happened?’ ’’ Brown said in a speech before the vote on the Senate floor.

The “don’t ask, don’t tell’’ statute, in place for 17 years, permits gays and lesbians to serve in the military only if they keep their sexual orientation secret. An order that would repeal the policy is included in the much broader Senate bill that authorizes $726 billion in military spending next year. The House has also included the repeal in its version of the bill.

The defense policy bill has traditionally enjoyed bipartisan support, passing 48 years in a row with both parties eager to back the military. But this year, with the bill being introduced to the Senate floor in a paralyzing atmosphere just weeks ahead of the midterm elections, both parties have sought to add amendments that motivate their supporters.

“They want to weigh this bill down with controversy in a transparent attempt to show their special interest groups that they haven’t forgotten about them ahead of the election,’’ said Senator Mitch McConnell, the minority leader. “This is not a serious exercise. It’s a show.’’

“It’s ridiculous! Ridiculous!’’ said Senator Robert Menendez, a Democrat from New Jersey. “What this is all about is using the minority to obstruct.’’

Separately, the Pentagon has been reviewing how it would implement a repeal in the military’s ranks. Although such a move is vigorously opposed by some generals and admirals, it has the support of Defense Secretary Robert Gates and Admiral Mike Mullen, chairman of the Joint Chiefs of Staff. It also had been a priority of Barack Obama on the campaign trail in 2008.

The Pentagon review is expected to be completed Dec. 1. Several Republicans, including Brown, have said they want to wait until that review is completed before voting on the overall defense bill.

The “don’t ask’’ law is also facing legal challenges, with a federal judge in California ruling earlier this month that the policy is unconstitutional.

Republicans seeking to keep the “don’t ask’’ policy have at least two options in the lame-duck session, both with pitfalls. They could try to strip the repeal provision from the overall bill, but they would need to muster at least 60 votes to overcome any Democratic filibuster.

It is also possible Republicans could succeed in delaying consideration of the overall bill until a new Congress convenes in January.

And with most analysts predicting that Republicans will take control of the House, they then might have enough votes to block inclusion of the repeal in a new bill. But that would hold up authorization for critical defense projects, angering the Pentagon.

Brown, who is on the Senate Armed Services Committee, had voted against the repeal of “don’t ask, don’t tell,’’ when the panel passed the measure and added it to the overall bill in May. But at that time, he voted to support the overall measure.

He had vowed not to join a filibuster to block the measure. “No, no, no,’’ he said according to the Associated Press, when asked whether he would attempt to stop the measure from coming to a vote before the full Senate. “Filibuster’s never — it’s not my style. I want to make sure that we have a full and fair debate on it.’’

But yesterday, Brown said he joined the filibuster primarily to protest the parliamentary moves of Senate majority leader Harry Reid, not to stop a repeal. “The bigger concern was the process. They were putting things into the bill that have nothing to do with our troops,’’ he said.

Senator John F. Kerry, who has strongly favored repealing the policy, criticized Republicans yesterday for not allowing the bill to come up for debate.

“It’s a bad day for the country when you don’t debate the things that are important issues before the country,’’ Kerry, the Massachusetts Democrat, told reporters as he went in to cast his vote.

“As a veteran, I’m deeply disappointed, and as a senator I’m deeply angered and determined to keep fighting until the Senate does what’s right,’’ he said later in a statement.

An estimated 13,000 people have been discharged under the policy since it was implemented in 1993. Gay rights groups have been eager to see the law repealed, and supporters began mobilizing in recent days. Singer Lady Gaga made an appeal to two Maine Republicans — Susan Collins and Olympia Snowe — by traveling to Portland this week.

Ultimately, the issue failed by a 56-to-43 vote. Republicans were unanimous against the measure and were joined by two Democratic senators from Arkansas, Blanche Lincoln and Mark Pryor. Reid also changed his vote to no, as a procedural tactic that will allow him to bring the issue up again.

Democrats yesterday had also hoped to take up an amendment to the bill that would provide illegal immigrants with a quicker pathway to citizenship through college or military service.

Dubbed the Dream Act, it would create a path to legal residency for youths who arrived before they turned 16; have lived in the United States for five consecutive years; and have no criminal record. Because Republicans blocked the defense bill from coming up, however, there was no vote on the amendment.

A group of somber-faced students demonstrating outside of Brown’s office in Boston vowed to push for the Dream Act yesterday. “It is a disappointment, but it’s not the end,’’ said Deivid Ribeiro, spokesman for the Student Immigrant Movement, a group advocating for undocumented immigrant children.

Maria Sacchetti of the Globe staff contributed to this report. Matt Viser can be reached at maviser@globe.com.