Corruption alleged in trial before senators 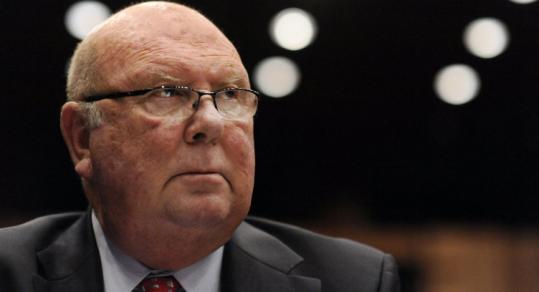 WASHINGTON — In his long career as a prosecutor and state and federal judge, the Honorable Gabriel Thomas Porteous of New Orleans has tried and presided over hundreds of cases involving malfeasance and misdeeds.

Now, in a chilly Senate hearing room, he is the defendant, accused of decades of corruption, in an impeachment trial that could result in him being kicked off the federal bench.

The trial is an extraordinary spectacle, featuring allegations that lawyers and bail bondsmen plied the judge, a reformed drinker and gambler, with gifts to gain his courtroom favor. Cash in envelopes. Bottles of Absolut and coolers of shrimp. A Vegas bachelor party for Porteous’s son, complete with lap dance.

It showcases both the often-sordid politics of Louisiana and a struggle over constitutional precedents.

But while this is the first Senate impeachment trial since President Bill Clinton’s in 1999, and the first for a member of the judiciary since 1989, the historic procedure is underway largely outside the zone of the public’s attention. Amid the tumult of the midterm campaigns, Washington’s attention has been occupied elsewhere.

The same room, No. 216 in the Hart Senate Office Building, was packed two months ago for the confirmation hearings of Supreme Court Justice Elena Kagan. Now it sits mostly empty of press and spectators.

The place is full, however, with prosecutorial heft, rare bipartisan teamwork and top-drawer defense lawyers who have increasingly been trying the patience of Senator Claire McCaskill, a Missouri Democrat, who is chairing the 12-member Senate Impeachment Trial Committee. The panel will make recommendations to the full Senate, which is expected to vote on impeachment sometime after the November elections.

A team of six House impeachment managers, headed by California Representative Adam Schiff, a former US attorney who tried public corruption cases, is prosecuting the four articles of impeachment, which also include charges that Porteous lied on his 2001 bankruptcy petition and to FBI agents who were conducting background checks after he was nominated to the US Court of Appeals for the Fifth Circuit.

Porteous’s defense lawyers, led by George Washington University professor Jonathan Turley, say the charges are overblown and do not rise to the “high crimes’’ described in the US Constitution. He urged senators to consider carefully before making Porteous the only judge in US history to be forced off the bench through impeachment without having been charged with a crime.

Porteous, 63, a large, balding man with thick gold rings on each hand, is suspended from the bench but still collecting his salary. He has sat impassively at the defense table, sometimes making a note or two on a legal pad, as a string of colorful characters have spilled the alleged tale of his dishonor and human failings.

His Metairie home was destroyed in Hurricane Katrina. Four months later, his wife, Carmella, died of a heart attack, his son testified. “After that, he became very isolated, he stayed at home, he was depressed,’’ said Timothy Porteous, also a lawyer.

Mutterings about the ethics of Porteous, a state judge for 10 years and former prosecutor, began almost as soon as he landed on it in 1994.

He was suspected of being way too cozy with Louis and Lori Marcotte, a pair of siblings who had monopolized the lucrative bail-bond business on the West Bank, and he was one of the local judges investigated in Operation Wrinkled Robe, an FBI investigation into corruption at the Jefferson Parish courthouse.

Two of his fellow state judges went off to jail for mooching off the Marcottes, and a third was taken off the bench by the state Supreme Court.

Marcotte took the judge to Las Vegas and treated him to expensive lunches, he testified, and his employees fixed Porteous’s fence and his cars, often returning them from the detailing shop with the vodka or shrimp left inside as a special goody bag.

Lawyers slipped Porteous cash, prosecutors charge, to influence their cases before his bench. The defense says those lawyers were longtime friends just trying to help out a man they knew had fallen on tough times.

The judge’s longtime secretary, Rhonda Danos, testified that she picked up an envelope in 1999 from Jacob Amato, a lawyer the judge’s son said he called “Uncle Jake,’’ who had a case pending with the judge. When Danos asked Amato’s secretary what was in the envelope, “she just rolled her eyes,’’ Danos said. “I said, ‘Never mind, I don’t want to know.’ ’’ Prosecutors said the envelope was stuffed with $2,000 or so in cash.

Danos also paid the judge’s gambling markers at casinos, she testified, after he and his wife filed for bankruptcy in 2001, initially under false names. Prosecutors charge Porteous accumulated thousands of additional gambling debt after the filing and never disclosed it to the court.

The impeachment trial’s rules of evidence are unlike civil or criminal trials, and McCaskill, a former city and county prosecutor, often has leaned over to seek guidance from Senator Orrin Hatch, a Utah Republican who is the committee’s vice chairman and a longtime Judiciary Committee member. And the case is complicated, for all of the hours of narrative that would seem to place Porteous in the parade of infamous Louisiana public servants, from former Representative William Jefferson with his cash in the freezer all the way back to Huey Long.