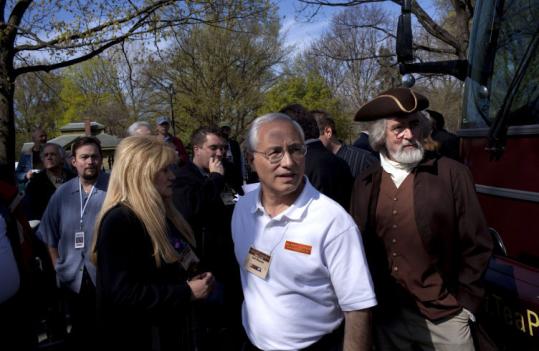 Sal Russo made his way to the stage during a Tea Party Express rally on Boston Common in April. Russo is a longtime GOP operative who got his start as an aide to Ronald Reagan. (Daryl Peveto/ New York Times)
By Janie Lorber and Eric Lipton New York Times / September 19, 2010

WASHINGTON — In the days leading up to the Delaware primary, Sal Russo hosted a radio fund-raiser, organized a rally, and pressed the case with reporters that Christine O’Donnell was the Tea Party’s choice for the US Senate. He also set off what he calls a “money bomb,’’ pouring at least $250,000 into TV and other advertisements promoting the little-known candidate.

With O’Donnell’s upset victory in the Republican primary on Tuesday, Russo, the chief strategist behind an upstart group called the Tea Party Express, had racked up another win.

But in becoming one of the movement’s most successful players by helping Tea Party favorites oust incumbents or trounce rivals in four states, Russo is also fast becoming among the most divisive.

Unlike many of the newly energized outsiders who have embraced Tea Party ideals, Russo, 63, is a longtime Republican operative who got his start as an aide to Ronald Reagan and later raised money for a string of other politicians, including George E. Pataki, a former governor of New York. His history and spending practices have prompted some former employees and other Tea Party activists to question whether he is committed to, or merely exploiting, their cause.

While most of that money passed through the firms to cover advertising and other expenses, that kind of self-dealing raises red flags about possible lax oversight and excessive fees for the firms, campaign finance specialists said.

“They are the classic top-down organization run by GOP consultants, and it is the antithesis of what the Tea Party movement is about,’’ said Mark Meckler, a national spokesman for Tea Party , a coalition of grass-roots organizations that does not endorse or contribute to candidates.

Russo’s group is also under attack from Republican Party leaders in Delaware, who have accused the Tea Party Express of improperly collaborating with O’Donnell’s campaign. Federal laws allow political action committees to support candidates independently, but they are not permitted to coordinate their spending with campaigns.

Russo dismisses all the criticism, saying he and his group have done nothing wrong. The Delaware party leaders are simply poor losers, he says, and his Tea Party critics are envious of his success.

The rise of the Tea Party Express can be traced to tax-filing day in 2009, when disparate groups organized what they called “tea parties’’ to protest government spending.

Within a day, Joe Wierzbicki, a senior associate at Russo’s firm, Russo Marsh & Associates in Sacramento, sketched out a proposal to latch onto the nascent Tea Party movement, according to internal e-mails provided to The New York Times. He hoped to breathe life into the firm’s faltering political action committee, known then as Our Country Deserves Better. Donations to the committee, established during the 2008 presidential campaign in an effort to frustrate the ambitions of Barack Obama, had dropped significantly.

“Here is the plan I’ve been cooking up in my head,’’ Wierzbicki wrote in an e-mail to Russo. “About how we really make a big impact with the 2010 elections coming up, on the heels of the successful Tea Party push on April 15, and my desire to give a boost to our PAC and position us as a growing force/leading force.’’

The plan called for a two-week road trip with a luxury tour bus that would make stops in dozens of cities represented by members of Congress deemed big spenders, including two Democratic senators, Harry Reid of Nevada, the majority leader, and Christopher J. Dodd of Connecticut, who decided to retire this year.

Since last July, the Tea Party Express has made three bus tours around the country. And its fund-raising — much of it coming from donors contributing $20 to $50 — has proved remarkably successful, equipping Russo with a hefty war chest. As in Delaware, the group has moved into states and paid for media blitzes for favored candidates in the final weeks before voting.

During this election cycle, the Tea Party Express has spent nearly $1 million in Nevada alone — $547,000 to support Sharron Angle, the Republican Senate candidate, and $385,000 in opposing Senator Harry Reid, the Democratic leader. In Massachusetts, the group spent nearly $350,000 to back Scott Brown, now the state’s Republican senator.

Russo estimated that Russo & Marsh, and his wife’s company, King Media Group, had been paid $250,000 a year for their work with the Tea Party cause.

An analysis of Federal Election Commission records by The Times puts the total amount paid at nearly $700,000 in the past 20 months, or about 13 percent of the $5.2 million the committee has spent. (By comparison, media buyers for candidates’ campaigns typically take a 6 to 15 percent commission, according to one consultant.)

But the campaign finance records for the Tea Party Express also showed payments totaling more than $10,000 for stays at casino hotels, as well as bills for meals at expensive restaurants near Russo’s offices.

“I was kind of shocked,’’ said Kelly Eustis, who served as political director at the Tea Party Express until leaving last fall. “It kind of turned me off.’’

Russo disputes that there was any lavish spending. “This has not been a profitable activity for us. We have plowed every penny back into this thing.’’