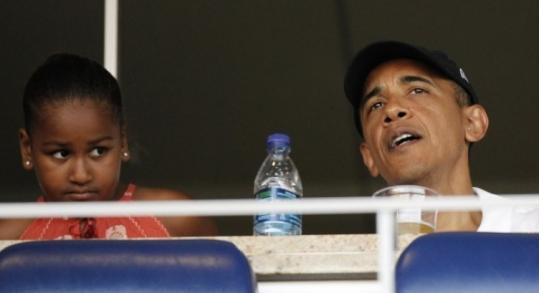 WASHINGTON — President Obama yesterday pinned blame on Republicans for making life harder for the unemployed and for those who could lose their jobs without new federal intervention. He did so even as he sought to distance himself from the “dreary and familiar politics’’ of Washington.

Capping a week in which the administration scored a victory — a $20 billion fund to be paid by for the victims of the Gulf of Mexico oil spill — Obama reserved his radio and Internet address to focus on the work that didn’t get done.

His main concern was the rejection of a bill in the Senate that would have provided more money for the long-term unemployed, aid for strapped state governments, and the renewal of popular tax breaks for businesses and individuals.

“If this obstruction continues, unemployed Americans will see their benefits stop,’’ Obama said. “Teachers and firefighters will lose their jobs. Families will pay more for their first home. All we ask for is a simple up-or-down vote. That’s what the American people deserve.’’

The broad economic bill failed Thursday when Democrats could not muster the 60 votes needed to end debate. The 56-40 vote fell four shy of the total required to break the GOP filibuster. Republicans support many of the policies in the legislation but are demanding changes to shrink its toll on the deficit.

“Americans want us to show we’re serious about lowering the debt, so the president and his allies in Congress have a choice to make: They can either vote to reduce the deficit, or they can lock arms and dig an even deeper hole of debt,’’ said Senate Republican leader Mitch McConnell of Kentucky.

The standoff again revealed the gaps between the Democratic president and the Republican congressional leaders on how to solve the nation’s problems.

Obama was at the same time branding the opposition party as obstructionist while seeking a higher level of debate from his own party and Republicans.

“We have an obligation to care for the next generation,’’ Obama said. “So I hope that when Congress returns next week, they do so with a greater spirit of compromise and cooperation. America will be watching.’’

In his address, Obama also bemoaned the stalling of a separate measure that would lift a $75 million liability cap on economic damages for companies such as BP during disasters like the Gulf oil spill. The Senate is considering a bill to increase that cap to $10 billion.

And Obama also said Republicans are the ones at fault for preventing votes on his nominees to key positions in the government. Former President George W. Bush often had the same complaint about Democratic lawmakers.

Republicans used their weekly address to claim that the president has been too slow to react to the threats posed by the Gulf oil spill and that some steps taken by his administration will do more harm than good.

“I’m glad President Obama is finally putting this catastrophe at the top of his agenda, but his response has been too slow,’’ Senator Roger Wicker of Mississippi said. Wicker criticized Obama for pushing for an energy bill and increases in oil cleanup fees and for calling for a moratorium on deep-water drilling, which he said would cost jobs and raise the price of energy.

Only one of the seven commissioners, the dean of Harvard’s engineering and applied sciences school, has a prominent engineering background — but it’s in optics and physics.

Another is an environmental scientist with expertise in coastal areas and the aftereffects of oil spills. Both are praised by other scientists.

The five other commissioners are experts in policy and management.

The White House said the commission will focus on the government’s “too cozy’’ relationship with the oil industry.

A presidential spokesman said panel members will “consult the best minds and subject matter experts’’ as they do their work.