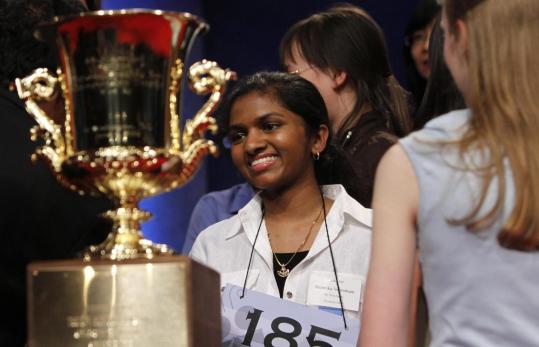 WASHINGTON — No theatrical flourishes for Anamika Veeramani. She kept her hands behind her back and rattled off the letters of every word she was given — until she was crowned the spelling bee champion.

The 14-year-old from North Royalton, Ohio, won the 83d Scripps National Spelling Bee yesterday, correctly spelling the medical word “stromuhr’’ to claim the winner’s trophy and more than $40,000 in cash and prizes.

Anamika was one of the favorites among the 273 spellers who began the three-day competition, having finished tied for fifth last year. She stood deadpan while the audience cheered, not cracking a smile until the trophy was presented.

There was a three-way tie for second. Adrian Gunawan, 14, of Arlington Heights, Ill.; Elizabeth Platz, 13, of Shelbina, Mo.; and Shantanu Srivatsa, 13, of West Fargo, N.D., were all eliminated in the same round.

Anamika survived the round by spelling “juvia’’ — a Brazil nut — and then had to wait for a nerve-racking 3 1/2-minute commercial before spelling the championship word.

The finals were preceded by an unpopular move that had some spellers claiming the bee was unfair and had kowtowed too much to television.

Concerned that there would not be enough spellers left to fill the two-hour slot on ABC, organizers stopped the semifinals in the middle of a round yesterday afternoon and declared that the 10 spellers onstage would advance to the prime-time broadcast, including six who did not have to spell a word in the interrupted round. Essentially, the alphabetical order of the US states helped determine which spellers got to move on.

“I would rather have five finalists than five who didn’t deserve it,’’ said Elizabeth, the finalist from Missouri and one of the four spellers who spelled a word correctly before the round was stopped. “I think it was unfair.’’