Tax objectors have long history in US

Man who crashed into IRS building is the latest defier 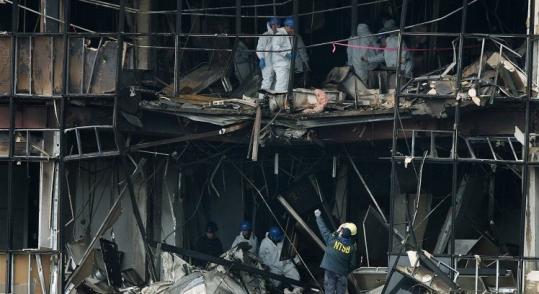 Federal investigators searched through the wreckage of a small plane inside an IRS building in Austin, Texas, on Friday. (Rodolfo Gonzalez/Austin American Statesman via Ap)
By Stephen Ohlemacher Associated Press / February 21, 2010

WASHINGTON - Joseph Stack’s methods were unthinkable - he is accused of ramming a plane into an Internal Revenue Service building in Texas - but his views on taxation follow a long line of protesters who believe tax laws don’t apply to them.

While their numbers aren’t large, according to experts, their arguments are so enticing that the IRS has published a guide to debunk their claims. In 2008, the Justice Department was concerned enough to start the “National Tax Defier Initiative’’ to better coordinate prosecutions.

“You would think a little light bulb would go on in their head and they would say, ‘Why in the heck is everybody else paying taxes?’ ’’ said Peter R. Zeidenberg, a former federal prosecutor who is now a litigation partner at the law firm DLA Piper in Washington. “There are people who are peddling this stuff. It’s a way to get people to believe something that’s too good to be true.’’

A 3,000-word manifesto posted on a website registered in Stack’s name rails against the IRS and accuses the agency of ruining his life. Stack’s bitter feud with the IRS apparently drove him to commit suicide Thursday by slamming his single-engine Piper PA-28 into an Austin office building where the IRS has offices.

Stack’s writings suggest he was part of a loosely organized movement that dates to at least the 1950s. Some believe the 16th Amendment to the Constitution, which authorizes Congress to levy income taxes, was not legally ratified; it was ratified in 1913.

Tax opponents aren’t limited to antigovernment militia members living off the land out West. Stack was a 53-year-old software engineer in Austin. Others include movie star Wesley Snipes and a decorated police detective in the nation’s capital.

“They’re fairly prevalent,’’ said Mark Potok, director of the Intelligence Project for the Southern Poverty Law Center, which tracks extremist groups. “We’ve had a right-wing tax protest movement going back several decades now. They were very hot in the 1990s, but they are very much still out there.’’

The center has documented five plots against the IRS or its agents since 1995, including one that year to blow up an IRS office in Austin. Potok said he was unsure if it was the same building Stack crashed the plane into.

In 2006, a Utah man was accused of threatening IRS employees with “death by firing squad’’ if they continued to try to collect taxes from him and his wife. The man, David D’Addabbo, pleaded guilty to one charge of threatening a government agent and was sentenced to five months served.

Not all tax protesters resort to violence. Snipes, star of the “Blade’’ trilogy and other films, was convicted on tax charges and sentenced to three years in prison in 2008 after claiming that Americans have no obligation to pay taxes and the IRS cannot legally collect them.

The detective in Washington, Michael Irving, got a 14-month prison sentence last year after prosecutors said he fraudulently arranged for the police department to stop withholding taxes from his paychecks.

In the letter on Stack’s website, which has since been removed, Stack said he had gone to “tax code readings and discussions’’ where he learned about “wonderful ‘exemptions’ that make institutions like the vulgar, corrupt Catholic Church so incredibly wealthy.’’ He said an attempt to claim similar exemptions inevitably cost him $40,000 and “10 years of my life.’’

He also complained about a 1986 tax law change that made it harder for engineers like himself to claim certain deductions as independent contractors.

The IRS has a website called, “Don’t Fall for These Frivolous Arguments.’’ Among them are:

■ False claim: The filing and paying of tax is voluntary.

IRS response: “The term voluntary compliance means that each of us is responsible for filing a tax return when required and for determining and paying the correct amount of tax.’’

■ False claim: Wages, tips, and other compensation are not income because there is no taxable gain when a person “exchanges’’ labor for money.

IRS response: “Congress has determined that all income is taxable unless specifically excluded by some part of the code.’’