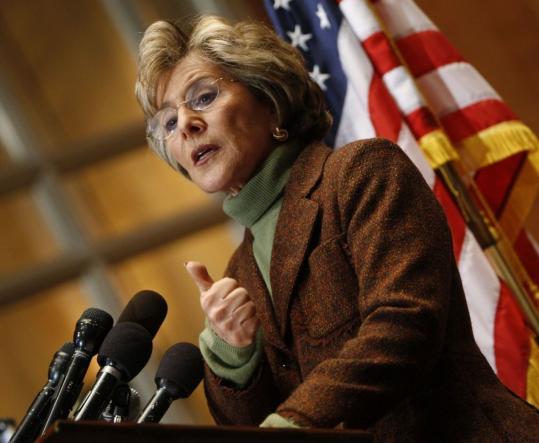 The widely played video clip of Senator Barbara Boxer of California reprimanding a general for calling her “ma’am’’ is the gift that keeps on giving for the two Republicans hoping to challenge her next year.

Republicans Carly Fiorina and Chuck DeVore are trying to capitalize on the exchange by making it a key ingredient of their fund-raising efforts and attempts to recruit grass-roots support. Both campaigns say the video revs up a GOP base that already has longstanding animosity toward Boxer, among the most liberal members of the Senate.

During a hearing last June, Boxer interrupted Brigadier General Michael Walsh of the Army Corps of Engineers in mid-sentence: “Do me a favor?’’ she said. “Could you say ‘senator’ instead of ‘ma’am?’ It’s just a thing. I worked so hard to get that title, so I’d appreciate it. Yes, thank you.’’

Boxer said the general was not offended by her remarks, but many in the GOP clearly were, including the two Republican challengers.

Former chief executive Carly Fiorina thought the exchange was so memorable that it prompted her to create the website CallMeBarbara.com, which she uses to raise money and keep in touch with supporters.

The campaign of state Assemblyman Chuck DeVore juxtaposed the Boxer clip with an Austin Powers movie frame showing the Dr. Evil character upbraiding those who dare refer to him as “Mr. Evil.’’ The 30-second video has generated more than 108,000 clicks on YouTube.

Barbara O’Connor, professor of communications at Sacramento State University, said the use of Boxer’s comments from the hearing will no doubt fire up the GOP base during the primary campaign but probably will not hurt the third-term senator in the general election. Jobs, health care, and other bread-and-butter issues are expected to take precedence, she said.

Leisa Brug Kline, the campaign manager for DeVore, expects that the Boxer video will be useful after the primary election because it illustrates the senator’s disregard for others. The popularity of the Dr. Evil video proves that people were upset by the exchange, she said.

Fiorina’s campaign is focusing on the exchange because it exemplifies the tone voters have come to expect from Boxer, said Julie Soderlund, a spokeswoman for Fiorina.

“A member of the military calling somebody ma’am or sir certainly isn’t something that’s unusual,’’ Soderlund said. “Most people who see the video recognize that and recognize the level of arrogance that Senator Boxer brought to the situation.’’

Gordon, 60, won reelection easily last year, garnering 74 percent of the vote, but was still on a list of Democrats targeted by Republicans in midterm elections.

“Turning 60 has led me to do some thinking about what’s next,’’ he said. “I have an 8-year-old daughter and a wonderful wife who has a very demanding job, and I am the only child of my 83-year-old mother, Margaret. They have made sacrifices to allow me to do what I love by serving Congress, and now it’s my turn.’’

Gordon, who was first elected in 1984, is the chairman of the House Committee on Science and Technology.

His announcement comes less than two weeks after his fellow Tennessee Democrat, Representative John Tanner, said he was retiring after 11 terms in Congress.

Andy Sere, a spokesman for the National Republican Congressional Committee, said that Gordon’s retirement is another indication that Tennessee Democrats will be facing tough fights in 2010.

The NRCC has been assailing Gordon for his votes on health care, the federal stimulus package, and on carbon cap-and-trade legislation.