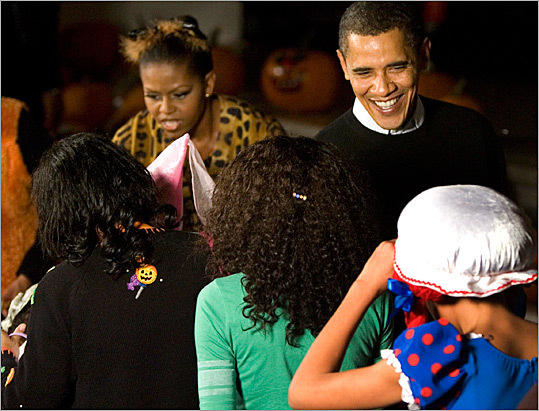 Dressed as superheroes, pirates, fairies, and skeletons, the children came in with their parents from Maryland, Virginia, and Washington, lining up at the orange lit White House.

A big, stuffed, black spider dangled in a web of string from the top of the portico, and pumpkins had sprouted up around the columns.

The loot handed out was just part of the treat for the children, ages 6 to 14. “He touched my hand,’’ said a beaming Tiera Thomas, 11, of Washington, after she picked up her candy from the president.

The Obamas spent about a half hour distributing candy.

The president, dressed in casual clothes, was one of the few not in costume. Even Obama’s press secretary, Robert Gibbs, was dressed as Darth Vader.

It was the first White House Halloween for the Obama daughters, 8-year-old Sasha and 11-year-old Malia. But the White House refused to say where Sasha and Malia Obama were celebrating Halloween and what the two girls were wearing.

WASHINGTON - President Obama said yesterday that reports that the economy is growing again and that more than 1 million jobs were saved or created by his stimulus plan show “we are moving in the right direction.’’

But he tempered his upbeat message with a cautious word about further job losses and progress yet to be made.

Unemployment hit a 26-year high of 9.8 percent in September, and the October report due next week could show it topping 10 percent.

The government reported last week that the economy grew 3.5 percent from July through September, the first signs of growth in a year and unofficial confirmation that the economic slide that began in December 2007 is over. Separately, the White House said Obama’s $787 billion stimulus plan - a mix of spending and tax cuts - had saved or created more than 1 million jobs.

“It is easy to forget that it was only several months ago that the economy was shrinking rapidly and many economists feared another Great Depression,’’ the president said.

WASHINGTON - Republicans have the answers to lower health costs and expanded coverage, not the Democrats who hold power in Washington and are creating more problems as they “recklessly pursue’’ a government takeover of the health care system, a GOP leader says.

The top House Republican, Representative John Boehner of Ohio, outlined his party’s alternative in the GOP’s weekly radio and Internet address yesterday. Democratic proposals are gaining momentum in Congress and Republicans are scrambling for support to try to block them.

“Enough is enough. Breaking the bank and taking away the freedoms Americans cherish is not the answer to the challenges we face,’’ Boehner said.

WASHINGTON - Celebrities George Clooney and Oprah Winfrey and prominent lobbyists, corporate executives, and Democratic fund-raisers were among the first to score visits with President Obama, his wife Michelle, or top aides at the White House, according to newly released records.

The White House Friday posted a list of roughly 480 records in response to questions about whether specific people visited the president’s home. It plans to start disclosing comprehensive visitor lists in coming months.

Among the guests was cofounder Bill Gates; labor leader and Obama supporter Andrew Stern, president of the Service Employees International Union; Ed Yingling, chief executive of the American Bankers Association and a registered lobbyist; and Camden Fine, chief executive of the Independent Community Bankers of America and a Washington lobbyist for the group.

Fine also had at least four Obama meetings, including the ones with bank CEOs and on housing; and lobbyists and Democratic fund-raisers Anthony and Heather Podesta made several visits to Obama aides.