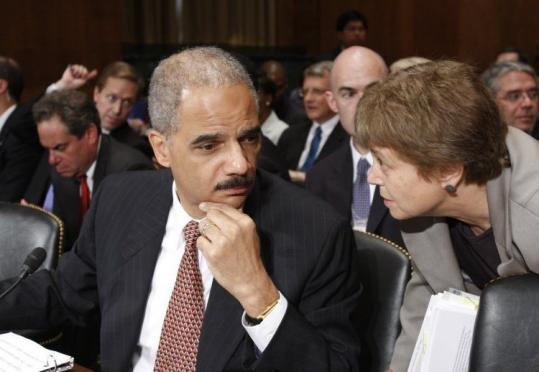 WASHINGTON - Attorney General Eric Holder urged Congress yesterday to pass a new hate crimes law so the government could prosecute cases of violence based on sexual orientation, gender, or disability.

At a Senate Judiciary Committee hearing yesterday, he cited the recent killing of a security guard at the US Holocaust Memorial Museum in Washington. The alleged assailant is a white supremacist.

“One has to look at the unfortunate history of our nation. There are groups that have been singled out, that have been targets of violence,’’ the attorney general said. “We have to face and confront that reality.’’

Lawmakers debated the possible effect of the Matthew Shepard Hate Crimes Prevention Act, named after a gay man killed in Wyoming in 1998. It would allow federal prosecution of violence committed because of the actual or perceived gender, disability, sexual orientation, and gender identity of the victim.

For more than a decade, Democrats have sought to update the hate crimes law, which already makes it a federal crime to attack someone because of their race, creed, or color.

Republicans questioned whether the change would expand federal power unnecessarily into cases already being prosecuted by state and local officials. They also asked why certain victims should be singled out for particular types of protection.

“That’s part of the problem. Some are protected groups and get special protection under this law,’’ said Alabama Senator Jeff Sessions, the committee’s top Republican.

Holder said the statistics show hate crimes against Hispanics have increased four years in a row.

Senator Dianne Feinstein, Democrat of California, said some of the debate in her state over immigration “has been part of hate, and people have been beaten up because they happen to be Hispanic, they happen to be on a street corner where somebody doesn’t want them.’’