Cyberspace hosts a blitzkrieg over nominee 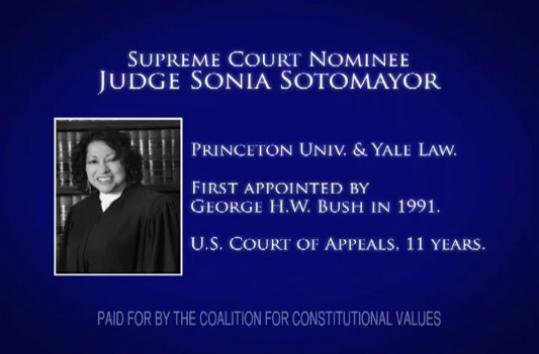 WASHINGTON - Within 24 hours of her formal nomination, the battle between liberals and conservatives over Sonia Sotomayor was raging yesterday - not among senators on Capitol Hill, but on the airwaves and the Internet.

No GOP filibuster planned against Sotomayor. A8

Looking to shape public opinion before her confirmation hearings this summer, advocacy groups on the left and the right launched competing ads yesterday with starkly conflicting views of Sotomayor, a federal appeals judge who is President Obama's first nominee for the high court.

The Judicial Confirmation Network produced a video, appearing only online for now, titled "Who is Sonia Sotomayor?" that has the hallmarks of an 11th-hour negative campaign ad: grainy footage, dramatic sound effects, and controversial quotes from Sotomayor - including one from a 2001 speech on why "a wise Latina woman" on the bench would reach better conclusions than a white judge.

By contrast, "Justice," the 30-second ad sponsored by the Coalition for Constitutional Values, weaves audio of Obama's speeches on what he wants in a Supreme Court nominee with flattering photos of Sotomayor and details about her qualifications, including her journey from a single-parent household in a New York City housing project to the federal bench, her Ivy League education, and her experience as a prosecutor, trial judge, and corporate litigator.

The ads are just one part of a high-tech information war that has already incorporated YouTube, Twitter, and instant messaging. Former House speaker Newt Gingrich, an influential Republican, used his Twitter account to blast Sotomayor yesterday. In less than 140 characters, he called the nominee a "Latina woman racist" and demanded she withdraw her nomination.

While advocacy spots are nothing new in a Supreme Court nomination fight, analysts say the ones on Sotomayor were produced with breathtaking speed and have unprecedented reach, due to an explosion of inexpensive technology and the popularity of social networking tools.

"It's breaking the sound barrier," said Mark Jurkowitz, associate director of the nonprofit Project For Excellence in Journalism. While ads for and against Chief Justice John Roberts and Justice Samuel Alito appeared before their confirmations in 2005 and 2006, respectively, "the speed of the spin is no doubt dramatically ramped up now," Jurkowitz said.

The Web-savvy White House is trying to keep up with the pace of the debate.

To rebut conservatives' talking points that Sotomayor would bring a personal agenda to the court or strive to use rulings to make policy, the White House arranged a conference call for reporters yesterday with Sotomayor boosters, including Harvard Law professor Martha L. Minow. And White House press secretary Robert Gibbs admonished reporters covering her nomination to "move past YouTube snippets and half-sentences and actually look at the honest-to-God record."

Both sides in the Sotomayor fight agree that their ability to frame the debate has accelerated along with technology. Although they say they have ample resources to produce ads throughout the confirmation process, the Internet - and speed - can prove more valuable than cash.

"I think it's new that those on our side of the spectrum are active this early," said Gary Marx, executive director of Judicial Confirmation Network. "Frankly, it's because we had so much to work with," including information on Sotomayor available on the Internet and YouTube. "We simply put it in a format to educate the American people more broadly, using her own words and her own writings."

An official with the Coalition for Constitutional Values said the high-tech, warp-speed fight creates a "clearly very different atmosphere" from even a few years ago, comparing the advance to the leap from cooking on a stovetop to using a microwave.

"Not only are they doing opposition research or supportive research of the nominee, in some ways they are preempting criticism of the nominee," he said. "You're getting a hyper-speed vetting process. It's more likely to mean [that] people choosing these nominees have to roll out the public-relations message campaign on day one, and be much more aggressive."