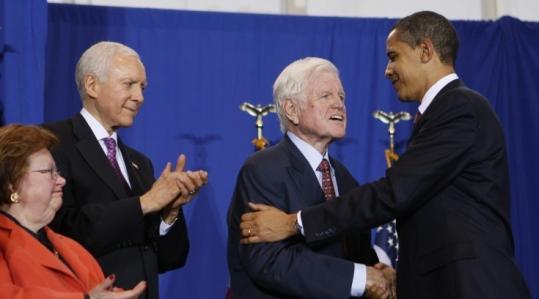 WASHINGTON - Honoring the call to service made by both President John F. Kennedy and Senator Edward M. Kennedy, President Obama yesterday signed a broad national service bill meant to encourage Americans - from grade schoolers to retirees - to volunteer to help their fellow Americans.

"We need your service right now, at this moment in history. I'm not going to tell you what your role should be; that's for you to discover. But I'm asking you to stand up and play your part," Obama, flanked by a hale-looking Kennedy, told a VIP-packed room at the SEED public boarding school in Southeast Washington, where he signed the Edward M. Kennedy Serve America Act.

"I want all Americans to take up that spirit of the man for whom this bill is named; of a president who sent us to the moon; of a dreamer who always asked 'Why not?'; of a younger generation that carries the torch of a single family that has made an immeasurable difference in the lives of countless families," Obama said.

Kennedy - his voice trembling slightly but showing little physical strain for a man diagnosed with a malignant brain tumor last spring - welcomed a hug from Obama and likened the moment to the day in 1966 when he greeted the first team of Peace Corps volunteers sent abroad by his brother.

"Today, another young president has challenged another generation to give back to this nation," the Massachusetts Democrat said. "Mr. President . . . You have walked the walk - and today, you pave the way for others," Kennedy said, answering a cheer from the crowd with a jubilant pumping of his fist.

The law dedicates $5.7 billion over five years to encourage volunteerism, including providing $500 summer scholarships to middle school and high school students and granting $1,000 educational stipends to older volunteers, who could pass the cash on to their children, grandchildren, or another young person.

Further, the law vastly expands AmeriCorps, putting the 16-year-old domestic volunteer program on track to increase from its current level of 75,000 volunteers to 250,000. Those volunteers - who receive a living allowance of about $12,000 for 10 to 12 months of work - would staff programs for poor people, veterans, the environment, healthcare, and education.

The legislation creates the legal framework for the program, which has substantial bipartisan support. But Congress must still appropriate the money.

Some conservatives oppose the idea; Gene Healy, vice president of the libertarian Cato Institute, called it "more carrot than stick, subsidizing volunteerism rather than mandating it."

But the director of the White House domestic policy council, Melody Barnes, a former longtime aide to Kennedy, said she was very hopeful the White House would secure the $1.1 billion Obama requested for the first year of the program.

Supporters said the program answers a historic shift, especially among young people, toward volunteerism. People in their 20s are displaying an interest in public service common in history after an era of affluence, said Morley Winograd, a fellow at NDN, a Democratic group, and coauthor of a book on the generation.

Alan Solomont, a former Boston community organizer who is a Democratic fund-raiser and chairman of the Corporation for National and Community Service, said federal and private volunteer agencies have been inundated with more applications than they can handle. In March, the corporation received 17,038 online AmeriCorps applications, nearly triple the 6,770 received a year earlier.

Yesterday's event was a big legislative victory for the ailing Kennedy, who wrote the bill with Utah Republican Senator Orrin Hatch last year and got it passed and signed into law quickly. But it also was a personal day of celebration for Kennedy's family, colleagues, and friends - including former President Bill Clinton, former First Lady Rosalynn Carter, and former Secretary of State Colin Powell.

While Kennedy has continued to work on legislation - focusing on a healthcare bill - he has largely stayed away from public events since he became ill.

"I'm so happy," Kennedy's niece, Caroline Kennedy, said as she left the event. "He's waited so long for this day."

Susan Milligan can be reached at milligan@globe.com.