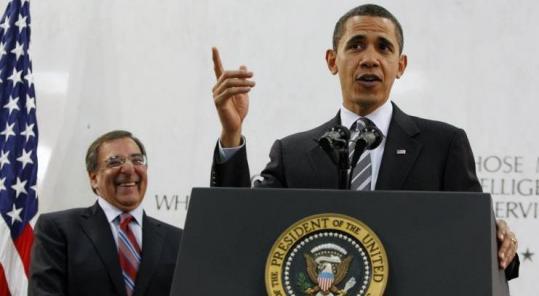 WASHINGTON - If a compromise can truly be audacious, President Obama's split-decision to release memos detailing the past use of allegedly torturous interrogation tactics, but also to promise to vigorously defend those who followed the (possibly illegal) rules was one of his most audacious so far.

This wasn't, of course, the audacity of hope but the audacity of realism - of a president trying, simultaneously, to maintain national security, preserve American credibility, follow disclosure laws without sacrificing executive privilege, and avoid a divisive legal battle.

All of this was not immediately accomplished. Obama spent the weekend taking flak from both sides - from civil libertarians who point to his obligation to prosecute torture, and from conservatives such as former CIA director Michael Hayden who felt the disclosures gave comfort to US enemies.

It's hard to predict exactly where this debate will go - whether Congress will push for tougher action against the CIA interrogators, or if a future event, such as a terrorist attack, will call attention to the need for so-called harsh interrogation tactics.

But the best guess is that Obama's decision will ensure that both sides will keep on debating - with civil libertarians demanding prosecutions, while conservatives insist the tactics were justified - to diminishing effect. Meanwhile, Obama will achieve his stated goal of keeping the country looking forward, not backward.

Obama is betting that full disclosure of what was done will satisfy most critics of the Bush administration. By admitting what was done, Obama also hopes to quell the conspiracy theories that are so often inspired by excessive secrecy - the assumption that the United States must have been doing much worse things to prisoners, otherwise why cover it up.

Obama alluded to that possibility in his statement that accompanied the memos. Keeping the memos secret, he argued, "could contribute to an inaccurate accounting of the past, and fuel erroneous and inflammatory assumptions about actions taken by the United States."

In fact, few of the techniques revealed in the memos were not previously known. In many cases, they were openly discussed by members of the Bush administration.

The tactics included dousing suspects in cold water, slamming them into walls, forcing them to remain nude, isolating them in small spaces, and in some instances pouring water into their faces to simulate drowning - known as waterboarding. These tactics were old news. The fact that a suspect who was known to be terrified of insects was put in a cage with an insect was new, but not necessarily worse than what was already known. (The insect was harmless.)

Still, CIA officials - including Obama's own director Leon Panetta - reportedly felt that releasing the memos would create unnecessary embarrassment and set a bad precedent of revealing sensitive methods and operations; it would diminish the CIA's mystique, and serve to reassure suspects that whatever their fears, they wouldn't be tortured by Americans.

"I think that by teaching our enemies our outer limits, by taking techniques off the table, we have made it more difficult in a whole host of circumstances I can imagine, more difficult for CIA officers to defend the nation," Hayden said on Fox News Sunday.

Obama, however, had already taken these tactics off the table - and made a point of saying so. Releasing the memos did little more than fill in a few blanks.

More significantly, Hayden echoed former Vice President Dick Cheney in insisting that these tactics yielded important intelligence - an assertion that some news reports have said is not supported by interrogation records. Cheney yesterday requested that the records be declassified, even as Obama advisers continued to insist the country was just as safe without the harsh tactics.

"We are absolutely confident that we have the tools necessary to get the information we need to keep this country safe," Obama's adviser David Axelrod declared Sunday on CBS's "Face the Nation."

If Axelrod and Obama are right, the president's decision should eventually win broad support. Obama has been forthright in rejecting torture and insisting on transparency - believing that disclosure sends a signal of public accountability, but that any further action would only inflame a debate that's sure to rage on for decades.

That's not enough to satisfy civil libertarians, and way too much to satisfy conservatives, but in its balancing of openness and restraint, many mainstream Americans are likely to see it as an act of leadership.

Peter S. Canellos is the Globe's Washington bureau chief. National Perspective is his weekly analysis of events in the capital and beyond. He can be reached at canellos@globe.com.