He works to build bonds with forces in surprise visit 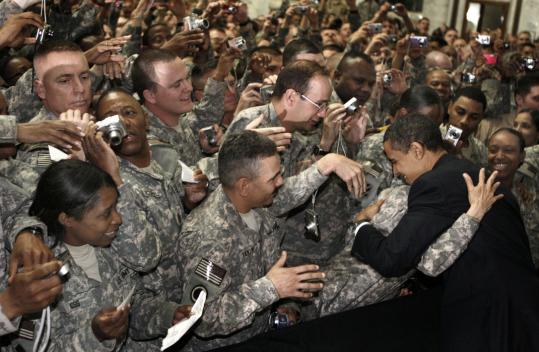 WASHINGTON - President Obama drew praise from troops and veterans groups for his surprise visit yesterday to Baghdad, another step in his concerted effort to win the support of the military despite having opposed the Iraq war and never having served in uniform.

"I'm honored and grateful to be with all of you. And I'm not going to talk long because I want to shake as many hands as I can," the president said, to loud applause and shouts. The troops, he said, have performed "brilliantly" and he pledged to do "everything we can" for military families and combat veterans.

"We have not forgotten what you have already done, we are grateful for what you will do," Obama said. "And as long as I am in the White House, you are going to get the support that you need and the thanks that you deserve from a grateful nation."

The unscheduled trip to Baghdad is Obama's latest gesture designed to win over the armed forces since he went on a "listening tour" with top Pentagon brass seven weeks ago. Last month, speaking to Marines at Camp Lejeune in North Carolina, Obama promised a pay increase and more help for wounded veterans - his biggest applause line in a speech detailing his plan to end the Iraq war and bring troops home.

The new president "knows that the military has a key role to play" in shaping the tone of his early presidency, said Rudy DeLeone, a military specialist at the Center for American Progress, a liberal-leaning Washington think tank.

"Taking care of the men and women who are serving in the field is one of the unique requirements of the president as commander in chief. He gets that," said DeLeone, who was undersecretary of defense under former president Clinton.

Yet members of the military and their families have long been skeptical of Democratic leaders, especially those who have never served in the military. And Obama was no exception: A Military Times poll conducted three weeks before his inauguration showed two-thirds of all men and women in uniform either questioned or doubted his ability as commander in chief, pointing to his lack of service and his opposition to the Iraq war.

Clinton, who was the first president in more than half a century never to have worn a military uniform, had serious problems in his first months in office winning the respect of troops. Many expressed resistance to his leadership, and questioned his commitment to national defense.

But analysts note that Obama - who, like Clinton, was educated in the Ivy League and seems culturally distant from the military rank and file - wants to avoid Clinton's missteps. Even before Clinton's election, many in the military distrusted him for having taken steps to avoid the draft during the Vietnam War, and he further alienated them early in his presidency by trying to resolve the highly-charged issue of whether openly gay service members can stay in uniform.

Obama has not only delayed taking action on gays in the military, pending a command review, but also made noticeable efforts to offer more personal signs of respect, including crisp salutes to Marines at his helicopter. Some service members had said that Clinton's wobbly salutes betrayed his lack of service.

Meanwhile, the president's wife, Michelle, has made support for military families her signature cause - including a high-profile trip to the Army's large Fort Bragg, N.C., base - to show concern for military spouses and dependents.

"Our soldiers and their families have done their duty, and they do it without complaint," she said. "And we as a grateful nation must do ours - do everything in our power to honor them by supporting them."

Yesterday, after an eight-day tour of Europe - including the G-20 summit in London, a NATO meeting in Brussels, and a visit to Turkey - Obama's heavily guarded Air Force One arrived in Baghdad from Istanbul, and heavy security surrounded the president from the moment he arrived. Hours earlier, a car bomb in a Shi'ite neighborhood of the capital killed nine people.

After a meeting with General Ray Odierno, the top US commander in Iraq, and talks with Iraqi leaders, Obama arrived at a former palace of Saddam Hussein to decorate 10 troops with the Medal of Valor. As the president gave an impromptu speech to a large number of soldiers gathered there - praising their sacrifices, pledging to hand Iraq over to Iraqis and warning of hard, dangerous work ahead - several troops took photos of him on cellphone cameras, and someone shouted, "We love you!"

"I love you back," the president replied.

Though it remains to be seen whether the president can fully earn the trust of the military, the good-will trip to Bagdad elicited praise from Vets for Freedom, a conservative-leaning military veterans' group. "It is critically important that our warriors in harm's way know they have the support of their Commander in Chief," said a statement from the group.

The trip is the second time Obama has visited Iraq; under criticism from Republican presidential candidate John McCain for not having visited the war-torn country, Obama traveled to Baghdad last July and met with Prime Minister Nouri al-Maliki and military commanders.

Rhode Island Senator Jack Reed, a Democrat and former Army Ranger who accompanied Obama on that trip, said in an interview that the president "has established a very sincere rapport" with top commanders and troops. "I saw it firsthand when we were in Iraq and Afghanistan last summer" before the election on a fact-finding tour of the war zones.

Though some in the military interpreted Obama's antiwar campaign platform as hostility toward the armed forces, the troops who met him "were impressed with his intelligence," Reed said. "They said: 'He came here to listen. He didn't come here to tell us what he thought we should know.' "