Decries havens in the western region of nation 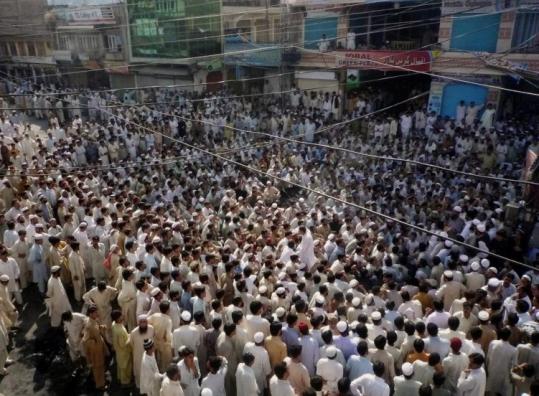 "The nature of the threat that they face, beginning with the assassination of the current president's wife and now most recently the attack on the Marriott hotel, makes very clear to the Pakistani government that they face an existential threat in the western part of their country," Gates told the Senate Armed Services Committee.

The remote mountainous region believed to be a safe harbor for Al Qaeda and other groups also poses the greatest threat of terrorism against the United States, Gates said in hearing testimony that underscored the dangers posed by the tribal lands along Pakistan's border with Afghanistan.

US officials have increasingly looked to Pakistan as a vital part of their strategy against an intensifying insurgency in eastern Afghanistan, which the Americans say is being fueled by militant strongholds in Pakistan.

Top US defense and diplomatic officials recently began reviewing American strategy in the region and Navy Admiral Mike Mullen, chairman of the Joint Chiefs of Staff, has specifically called for a new military strategy that encompasses both Afghanistan and Pakistan.

But thousands of US troops requested by commanders in Afghanistan are unlikely to be available until next spring at the earliest, Gates said. In the meantime, the United States has stepped up its campaign against militants in Pakistan with a series of missile strikes from predator drones and a US commando raid in South Waziristan.

Gates said Islamabad's government cannot publicly support US military action against militant targets on Pakistani soil and warned that any deterioration in US relations with the nuclear-armed nation would hurt American interests.

"During this time of political turmoil in Pakistan, it is especially crucial that we maintain a strong and positive relationship with the government, since any deterioration would be a setback for both Pakistan and Afghanistan," the US defense chief said. "The war on terror started in this region. It must end there."

A suicide truck bomb exploded outside Islamabad's Marriott hotel on Saturday, killing at least 53 people and gutting the hotel. A previously unknown Islamist group claimed responsibility for the bombing, which follows the December assassination of former prime minister Benazir Bhutto.

The bombing, which has led to speculation that Pakistani leaders may have been the targets, followed an assassination attempt against Prime Minister Yousaf Raza Gilani.

The militant-driven rise in Afghan violence prompted President Bush to send to Afghanistan a US Marine force of nearly 2,000 troops in November and an Army brigade of around 4,000 troops in January.

US Army General David McKiernan, the head of the NATO-led force in Afghanistan, later said he needed three more brigades plus support units - about 15,000 troops - in addition to the deployments announced by Bush.

But Gates said a new deployment of that scale would be unlikely this year because of US troop commitments in Iraq, where about 150,000 US forces remain.

The United States now has about 33,000 troops in Afghanistan, including 13,000 under NATO command.