Board created by Ford loses most of its power 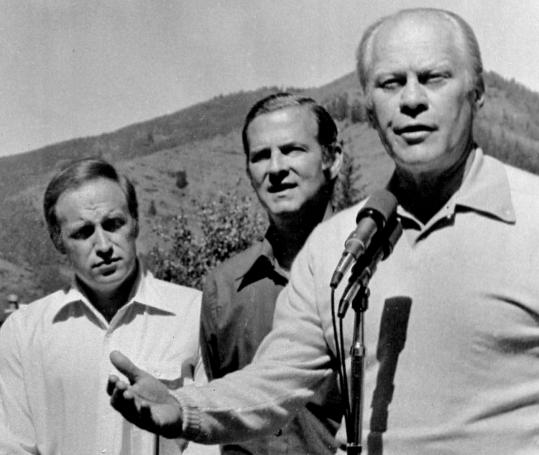 WASHINGTON - Almost 32 years to the day after President Ford created an independent Intelligence Oversight Board made up of private citizens with top-level clearances to ferret out illegal spying activities, President Bush issued an executive order that stripped the board of much of its authority.

The White House did not say why it was necessary to change the rules governing the board when it issued Bush's order late last month. But critics say Bush's order is consistent with a pattern of steps by the administration that have systematically scaled back Watergate-era intelligence reforms.

"It's quite clear that the Bush administration officials who were around in the 1970s are settling old scores now," said Tim Sparapani, senior legislative counsel to the American Civil Liberties Union. "Here they are even preventing oversight within the executive branch. They have closed the books on the post-Watergate era."

Ford created the board following a 1975-76 investigation by Congress into domestic spying, assassination operations, and other abuses by intelligence agencies. The probe prompted fierce battles between Congress and the Ford administration, whose top officials included Dick Cheney, Donald Rumsfeld, and the current president's father, George H. W. Bush.

To blunt proposals for new laws imposing greater congressional oversight of intelligence matters, Ford enacted his own reforms with an executive order that went into effect on March 1, 1976. Among them, he created the Intelligence Oversight Board to serve as a watchdog over spying agencies.

"I believe [the changes] will eliminate abuses and questionable activities on the part of the foreign intelligence agencies while at the same time permitting them to get on with their vital work of gathering and assessing information," Ford told Congress.

The board's investigations and reports have been mostly kept secret. But the Clinton administration provided a rare window into the panel's capabilities in 1996 by publishing a board report faulting the CIA for not adequately informing Congress about putting known torturers and killers in Guatemala on its payroll.

But Bush downsized the board's mandate to be an aggressive watchdog against such problems in an executive order issued on Feb. 29, the eve of the anniversary of the day Ford's order took effect. The White House said the timing of the new order was "purely coincidental."

Under the old rules, whenever the oversight board learned of intelligence activity that it believed might be "unlawful or contrary to executive order," it had a duty to notify both the president and the attorney general. But Bush's order deleted the board's authority to refer matters to the Justice Department for a criminal investigation, and the new order said the board should notify the president only if other officials are not already "adequately" addressing the problem.

Bush's order also terminated the board's authority to oversee each intelligence agency's general counsel and inspector general, and it erased a requirement that each inspector general file a report with the board every three months. Now only the agency directors will decide whether to report any potential lawbreaking to the panel, and they have no schedule for checking in.

Suzanne Spaulding, a former deputy counsel at the CIA who has worked as a congressional staff member on intelligence committees for members of both parties, said the order "really diminishes the language that calls on the Intelligence Oversight Board to conduct independent inquiries," leaving the panel as potentially little more than "paper pushers."

And Elizabeth Rindskopf Parker, a former general counsel at both the CIA and the National Security Agency who is now the dean of the University of the Pacific law school, said it was unwise for the Bush administration to undermine the Intelligence Oversight Board at the same time that the administration has been pushing for fewer restrictions on its intelligence powers.

"An organization like this gives some level of comfort that there is an independent review capability," Parker said. "Changes like this appear to water down an organization that contributes to the public's confidence."

But Tony Fratto, a White House spokesman, denied that the order reduced the authority and independence of the panel.

Fratto pointed to a federal statute that makes it a general duty of all government officials to report lawbreaking to the Justice Department. Because of this, he said, there is still a "widely understood background presumption" that the board can contact the attorney general even though Bush deleted the authority to make criminal referrals from its list of core responsibilities.

Fratto also said the changes merely updated the board's responsibilities after Congress in 2004 created a director of national intelligence to run the intelligence community. The order says the director is the person responsible for making any criminal referrals to the Justice Department.

Still, critics contend that the director of national intelligence cannot play the same watchdog role as the oversight board because he is part of the intelligence world, not independent from it, and so there may be occasions in which he has signed off on an activity whose legality might be questioned by outsiders.

Some analysts said the order is just the latest example of actions the administration has taken since the 2001 terrorist attacks that have scaled back intelligence reforms enacted in the 1970s.

Ford's order also banned assassination. But Bush authorized the CIA to draw up a list of Al Qaeda suspects who could be summarily killed.

The administration decided that such targeted killings were an exception to the rule because it was wartime.

In 1978, Congress enacted a law requiring warrants for all wiretaps on domestic soil. But now spies are free to monitor Americans' international calls and e-mails without court supervision if the wiretaps are aimed at targets overseas.

In 1980, Congress enacted a law requiring that the full House and Senate intelligence committees be briefed about most spying activities. The Bush administration asserted that it could withhold significant amounts of information from the committees, briefing congressional leaders instead.

Finally, executive orders were once widely understood to be binding unless a president revoked them, an act that would notify Congress that the rules had changed. But the administration has decided that Bush is free to secretly authorize spies to ignore executive orders - including one that restricts surveillance on US citizens traveling overseas - without rescinding them.

Some critics of the post-Watergate era have contended that its investigations and reforms went too far. For example, Cheney, who was Ford's chief of staff, said in December 2005 that "a lot of the things around Watergate and Vietnam . . . served to erode the authority, I think, the president needs to be effective, especially in a national security area."

But Frederick A. O. Schwarz Jr., the former chief counsel to the Senate committee that undertook the 1975-76 investigation into intelligence abuses, said that by rolling back the post-Watergate reforms, the Bush administration had made intelligence abuses more likely to occur.

"What the Bush administration has systematically done is to try to limit both internal oversight - things like the Intelligence Oversight Board - and effective external oversight by the Congress," Schwarz said, adding, "It's profoundly disappointing if you understand American history, and it's profoundly harmful to the United States."