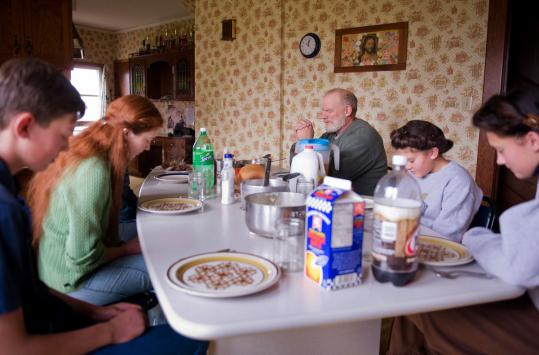 ACKLEY, Iowa - Inside the Carson family home, a white farmhouse surrounded by corn and soy bean fields and accessible only by gravel road, adherence to the teachings of the Lord Jesus is paramount.

The four children are home-schooled, to guard against a sinful outside world. Tim Carson, a 54-year-old welder and former atheist who said he found God at age 17, taught each of his children to read by age 5 from the Gospel of John.

While their lives center around family and religion, the Carsons worry about what they see as a nation undone by financial and moral bankruptcy. That concern will drive the Carsons - and a disproportionate number of Christian evangelicals - to Iowa’s first-in-the-nation caucuses Jan. 3 to help choose the Republican nominee for president.

But unlike in 2008 when many evangelicals and home-schooling families backed Baptist minister and former Arkansas governor Mike Huckabee, propelling him to a win over favorite Mitt Romney, there is no consensus this time among this faith community - except perhaps to support anyone but the former Massachusetts governor.

Many say they view Romney’s candidacy with skepticism because of his Mormon religion and doubt his commitment to conservative principles given his history of shifts on issues, abortion in particular.

“The evangelicals, if they’ve coalesced at all, they’ve coalesced against Romney. But they’re fragmented as to who they’re going to support to be the alternative to Romney, which could bolster Governor Romney,’’ said Bob Vander Plaats, who was Huckabee’s state chairman in 2008 and whose social advocacy group, The Family Leader, has yet to issue an endorsement.

A group of conservative Christian pastors this week embarked on an eight-city tour of the state trying to get Christians to vote for Minnesota Representative Michele Bachmann because, as one put it, she is “biblically qualified to be president.’’

Other self-described evangelical Christians hold up former Pennsylvania senator Rick Santorum as the one whose family values most match theirs. Still others support former House Speaker Newt Gingrich as the most electable and are willing to forgive his history of infidelity.

Vander Plaats said he remains undecided, similar to the 60 percent of caucus-goers polled by the Des Moines Register who say they have a first choice but can be persuaded to vote for someone else.

Gingrich is the current favorite with born-again evangelicals by a 2-to-1 ratio over Bachmann, Romney, and Texas Representative Ron Paul, said Ann Selzer, president of Selzer & Co., which conducts polling for the Register.

The caucuses are expected to draw tens of thousands of Iowans, many of whom say they are motivated by God to pick a leader who is a true conservative to right the nation’s course. Sixty percent of Republican caucus-goers in 2008 identified themselves as evangelicals, even though they make up just 25 to 35 percent of adults in Iowa, Selzer said. In her latest polling, 38 percent of likely caucus-goers identified themselves as born-again or fundamentalist Christian.

Candidates keen on courting the evangelical vote continue to flood Iowans’ homes with campaign brochures professing their devotion to God. Paul issued a six-page letter in November outlining his pro-life stance, and affirming that he’s been a Christian his entire life. The Carsons received a poster from Governor Rick Perry of Texas last week attesting that his principles are grounded in a “living Christian faith’’ that has guided his decisions as governor.

For Tim Carson, his wife, Betty, and their eldest daughter, Bethany, who will turn 18 by the November election, the right choice is Paul - someone unabashedly opposed to abortion who they feel has the courage to limit the powers of the federal government, cut spending, and return America to its God-given freedoms.

In Urbandale, a suburb of Des Moines, George and Gail DeGraaf laid out a very simple rationale for their plan to caucus for Santorum.

“He’s very high on moral values, which to Iowans means something,’’ said George DeGraaf, a retired printing ink manufacturer, after a breakfast meeting of conservatives. “As a nation, we’re losing that.’’

In Waukee, another suburb of Des Moines, Bachmann, Santorum, and Perry have each addressed the congregation at Point of Grace Church, said Pastor Jeff Mullen. But the candidate he senses the most fervor for is Gingrich.

“He actually believes we are an exceptional nation,’’ Mullen said. “We are one nation under God.’’

Mullen brushed aside Gingrich’s marital indiscretions. “If God’s forgiven him, why shouldn’t we?’’ he said.

In the Carson home, prayers are said regularly, before meals or just when the family is moved to do so- like on a recent evening when they bowed their heads to thank God for providing a “fun day.’’

The highlight: piling into the family van for a visit to a nursing home where all six sang gospel music and discussed the need for Jesus in their lives. The children took turns on the piano, violin, guitars, mandolin, accordions, harmonicas - instruments the family said were gifts from God that they learned to play with little formal training. Two of the girls yodeled.

The Carsons spent much of the summer and fall giving their children a political education, carting 17-year-old Bethany, 15-year-old Charity, 13-year-old Daniel, and 10-year-old Sarah Faith from campaign event to campaign event in their beige Ford Econoline.

While Charity said she would rather spend her time reading books about aviators and World War II bombing raids, Bethany proudly posts photos on her Facebook page of her smiling next to Paul; her and Bachmann; her and Santorum; and her and business executive Herman Cain, who has since suspended his campaign.

The teenager, who like her sisters wears her hair to her waist and favors calf-length skirts out of modesty, is the first in her family to rise each morning at 5 a.m. to beat her younger siblings to the family’s only computer.

She logs on to the Internet to update her political blog - a treatise on why she plans to caucus for Paul. She has also penned letters to the editor about her support, one of which was recently published in the Cedar Falls Times. And she urges extended family and friends to caucus for him in a newsletter she publishes every two months that also includes religious poems, essays, vocabulary and Bible quizzes, and favorite recipes like teriyaki venison jerky.

As the family sat down for a lunch of roast beef and mashed potatoes recently, Betty Carson, a 43-year-old former Army Reserve sergeant who worked as a Red Cross phlebotomist before she had children, elaborated on the family’s support for Paul’s libertarian views: “We’re taught to trust in God, not the government. God will provide our every need.’’

While the Carsons and other evangelicals say they believe Romney’s Mormon religion will be a liability for him in the caucuses because many of them doubt that Mormons are Christian, some do not think that matters. Mormons consider themselves to be Christians because they accept Jesus Christ as their savior.

Iowa Secretary of State Matt Schultz, a Mormon who has endorsed Santorum because his values most match his own, said his religion was used against him when he ran in 2010 but he ultimately won 50 percent of the votes.

“Is religion a factor? Absolutely,’’ Schultz said. “But I don’t think it’s a game changer.’’

As the sun faded over the flat landscape dotted with grain bins, the Carson family van pulled up to a farmhouse belonging to Tim’s parents. Once ardent Bachmann supporters, the Carson grandparents are now undecided.

Colleen Carson, an 81-year-old painter, said she wants a president who will encourage Christianity to be practiced freely in public schools and to support marriage as only between a man and a woman.

“This country was founded on Christian faith,’’ she said from her recliner as her grandchildren listened attentively from the staircase behind her. “If you don’t like it, you can always leave.’’

While Romney is “probably the most moral man up there,’’ she said, “I just feel we should have a godly man leading this country with a strong Christian faith.’’

Harry said he believes Romney will prevail as the Republican nominee.

“Of the field running at this time, I believe he is the best man to hold office,’’ Harry Carson said. “Farmers don’t care what religion you are, as long as you’re Christian.’’