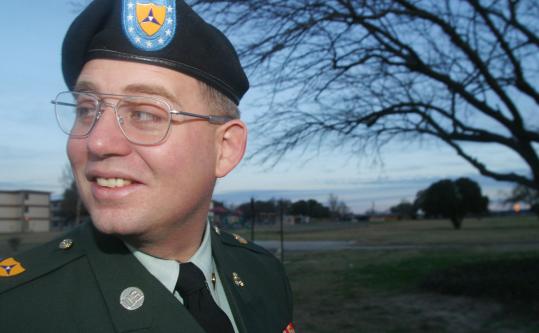 NEW YORK - The convicted ringleader of detainee abuses at Abu Ghraib prison in Iraq was released yesterday from a military prison, an Army spokeswoman said.

Charles Graner Jr., 42, was released from the US Disciplinary Barracks at Fort Leavenworth, Kan., about 10 a.m. after serving more than 6 1/2 years of a 10-year sentence, spokeswoman Rebecca Steed said. He will be under the supervision of a probation officer until Dec. 25, 2014, she said.

Steed said she could not release any information about Graner’s whereabouts or his destination after release. Neither Graner nor his wife - who was a fellow Abu Ghraib defendant - has responded to interview requests. Calls and e-mails to Graner’s father and lawyer were not immediately returned.

Graner was an Army Reserve corporal from Uniontown, Pa., when he and six other members of the Maryland-based 372d Military Police Company were charged in 2004 with abusing detainees at the prison in Iraq. The strongest evidence was photographs of grinning US soldiers posing beside naked detainees stacked in a pyramid or held on a leash.

The pictures complicated international relations for the United States and provoked debate about whether harsh interrogation techniques approved by the Pentagon amounted to torture.

Graner is the last Abu Ghraib defendant to be released from prison and received the longest sentence.

Hana Adwar, an Iraqi human rights activist said the “easy’’ release of a criminal who “committed a war crime’’ would be met with outrage in Iraq.

Steed said Graner’s obligation to the military ends at the end of 2014. Until then, his supervised release could be suspended. She said Graner, who was a civilian correctional officer, was released before serving his maximum sentence under rules that include days off for good behavior.

During his deployment, Graner fathered a son with Lynndie England, former private first class, of Fort Ashby, W.Va. England was given a three-year sentence for her role in the prison scandal.

After his conviction, Graner married another member of his unit, Megan Ambuhl, a former specialist, of Centreville, Va. She was discharged from the Army after pleading guilty to dereliction of duty for failing to prevent or report the maltreatment.