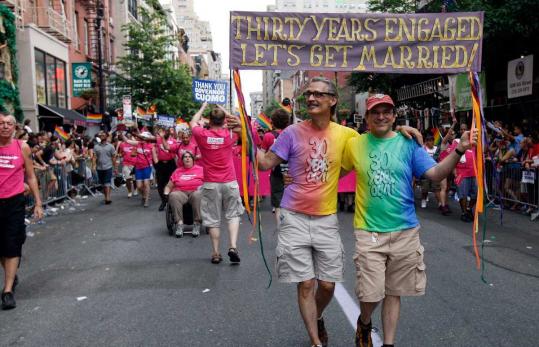 It was a noisy, and jubilant, day in the West Village.

Much of the cheering was aimed at Governor Andrew M. Cuomo, a Democrat, who made legalization of same-sex marriage a part of his election campaign and then led the fight for its approval in the Republican-controlled Senate.

The law signed by Cuomo takes effect in 30 days. The bill received final legislative approval Friday when four Republicans joined 29 Democrats to push the measure through the by a 33-29 vote. It was passed despite opposition from influential religious groups in the state.

The same-sex marriage movement, which suffered setbacks from California to Maine in recent years, is hoping its unexpected victory in New York will reenergize efforts to legalize gay weddings around the nation.

But the success in New York, although clearly giving an inspirational jolt to gay-rights advocates, will likely prove difficult to replicate. Twenty-nine states have constitutional bans on same-sex marriage, and 12 others have laws against it. And many of those states where support for same-sex marriage is high have already acted on the issue.

Officials at several gay-rights organizations said they would seek to move quickly in Maryland, where legislation to legalize same-sex marriage was shelved in February by Democratic leaders concerned that it lacked the support to pass. Advocates also said they hoped to resuscitate a marriage bill that died in Rhode Island’s Legislature this year.

Gay-rights groups are likely to seek ballot initiatives next year to overturn bans on same-sex marriage in Maine, where the Legislature approved a same-sex marriage law in 2009 that voters almost immediately turned back, and in Oregon.

Advocates hope, in the longer term, to win the legalization of same-sex marriage in Delaware and New Jersey, two states where Democrats control the legislatures, as well as in Pennsylvania.

Cuomo was the star of yesterday’s parade in New York, eliciting loud cheers and shrieks as he made his way down Fifth Avenue. With Cuomo were Mayor Michael R. Bloomberg and several other local politicians.

“Finally we got someone who does what he believes in,’’ said Chuck Sawyer, 49, a fund-raiser for the American Lung Association, who added that he and his partner would probably get married in late summer. “He’s been doing what he said he’d do. A lot of past governors, and even the president, haven’t come through. He did.’’

Revelers along the route, which ran down Fifth Avenue from 35th Street and then west past the Stonewall Inn, the birthplace of the gay rights movement, held up thousands of printed signs reading “Promise Kept!’’ and “Thank You Gov. Cuomo.’’ Bloomberg waved a rainbow flag.

Cuomo seemed to bask in the crowd’s attention, beaming and pointing out individuals along the route.

“I’ve been to the parade many times, and there’s always a lot of energy and it’s always been a ball, but this was special,’’ he said, as he stepped out of the parade on Christopher Street. “I think you’re going to see this message resonate all across the country now. If New York can do it, it’s OK for every other place to do it.’’

In a rare public appearance with the governor, Cuomo’s girlfriend, Sandra Lee, a celebrity chef who has an openly gay brother, marched by his side. Lee figured into Cuomo’s deliberations over same-sex marriage, according to those who know the couple: she repeatedly reminded him that she wanted the law changed.

Former governor David A. Paterson, who championed a same-sex-marriage bill that was defeated nearly two years ago when Democrats had a majority in the Senate, marched a few blocks behind Cuomo. He held a blue poster with a message thanking Cuomo.

Earlier in the day, Governor Chris Christie of New Jersey, a Republican, rejected the notion that his state would follow New York’s lead. “I believe marriage should be between one man and one woman,’’ Christie said on NBC’s “Meet the Press.’’ “I wouldn’t sign a bill like the one that was in New York.’’

For Lisa Guadalupe and Lissette Conti, who came to the march with their three children, the parade capped a week of highs and lows as they watched lawmakers labor over the marriage bill.

“It’s been crazy,’’ said Conti, a home health aide. “I didn’t want to get too happy because I was afraid it wouldn’t pass. I held my breath for the longest time, then I screamed.’’

For now, though, the couple said they have no immediate plans to marry. “That costs money,’’ Conti said. “I want a nice big church wedding.’’

In Chicago, organizers of that city’s gay-pride parade scrambled to repair dozens of floats after someone slashed their tires overnight at a garage on the South Side. Police said it was too early to determine whether the damage was a hate crime.