Prophecy of the end straining families 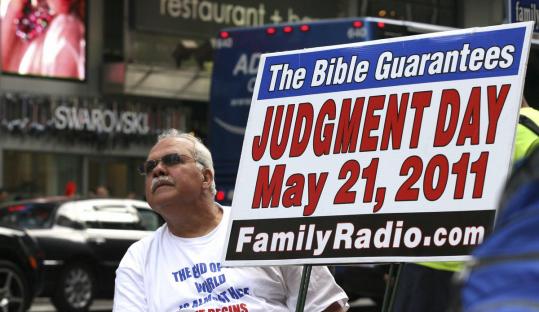 The Haddad children of Middletown, Md., have a lot on their minds: school projects, SATs, weekend parties. And parents who believe the earth will begin to self-destruct tomorrow.

The three teens have been struggling to make sense of their world, which started changing nearly two years ago when their mother, Abby Haddad Carson, left her job as a nurse to “sound the trumpet’’ on mission trips with her husband, Robert. They stopped working on their house and saving for college.

Last weekend, they dragged their children through a Manhattan street fair in a final effort to spread the word.

“My mom has told me directly that I’m not going to get into heaven,’’ said Grace Haddad, 16. “At first it was really upsetting, but it’s what she honestly believes.’’

Thousands of people have spent the past few days saying final goodbyes before tomorrow, Judgment Day, when they expect to be absorbed into heaven in a process known as the rapture. Nonbelievers, they hold, will be left behind to perish.

Followers are typically viewed as harmless proselytizers. But their convictions have frequently created the most tension within their own families.

Kino Douglas, 31, an agnostic, said it was hard to be with his sister Stacey, 33, who “doesn’t want to talk about anything else.’’

The Douglas siblings live near each other in Brooklyn, and Douglas said he could not wait until Sunday — “I’m going to show up at her house so we can have that conversation that’s been years in coming.’’

Stacey Douglas and other believers subscribe to the prophecy of Harold Camping, a self-taught biblical scholar whose doomsday scenario — broadcast on his Family Radio network — predicts a May 21, 2011, Judgment Day.

On that day, arrived at through a series of Bible-based calculations that assume the world will end exactly 7,000 years after Noah’s flood, believers are to be transported up to heaven as a worldwide earthquake strikes. Nonbelievers will endure five months of torment before the planet’s total destruction in October. In 1994, Camping said the rapture would probably be that year, but he now says newer evidence makes the prophecy for this year certain.

But the Haddad children worry about money for college.

“I don’t really have any motivation to try to figure out what I want to do,’’ said Joseph Haddad, 14, “because my main support line, my parents, don’t care.’’

“I have mixed feelings,’’ said his mother, Haddad Carson. “I’m very excited about the Lord’s return, but I’m fearful that my children might get left behind.’’

The children, however, have found something to giggle over.