Gay marriage and abortion at forefront; some say party might appear out of touch 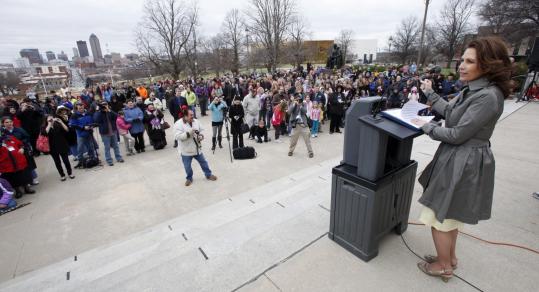 Representative Michele Bachmann, Republican of Minnesota, spoke at a rally by home-schooling advocates at the State House in Des Moines last week. She did not speak about the economy or unemployment, which are leading issues nationwide. (Charlie Neibergall/Associated Press)
By Matt Viser Globe Staff / March 27, 2011

DES MOINES — Representative Michele Bachmann stood outside the state capitol and railed against the judges she called “black-robed masters’’ who allowed gay marriage in states like Iowa and Massachusetts. To shouts of “Praise the Lord’’ and “Yes! Yes!’’ she talked about her marriage of 33 years, the 28 children she has helped raise, and her stance as a antiabortion Republican.

“I am so tired of the establishment telling us that they know best,’’ the Minnesota Republican yelled to the receptive crowd. “We know best.’’

Telling in her 12-minute speech was what she left out: Not once did she address the economy. She warned of “hedonism’’ but not unemployment, and did not mention the word “jobs’’ at all.

The 2012 election is supposed to be a referendum on President Obama’s efforts to fix the US economy and control the deficit, but Christian conservatives are dominating the early agenda for potential Republican presidential candidates visiting Iowa, a crucial state whose caucus voters will begin the GOP nominating contest next year.

The state’s strong focus on issues such as abortion and gay marriage is causing some Republicans to worry that Iowa could be perceived as being out of step with the broader national mood — and could hurt the chances that the GOP will elect a nominee who can effectively challenge Obama on an economic battlefield.

They are expecting that while more organized religious conservatives have effectively dominated the early discussion here, the conversation will eventually turn to fiscal issues.

“There’s that awareness among a lot of people — lifelong Iowans very invested in the caucus process and the Republican Party — that the debate needs to be more well-rounded, more comprehensive,’’ said veteran Republican strategist Bob Haus, who managed Fred Thompson’s campaign here in 2008 but is not aligned with any candidates this year. “I’m confident that you’ll see the economic issues start to bubble up.’’

Governor Terry Branstad, who was elected on a jobs-creating platform, also said the focus would probably shift.

“It’s just because the groups that are sponsoring [the early forums] are groups focused on social issues,’’ Branstad said in an interview. “There will be plenty of opportunities for candidates to address the economic issues and jobs, and a whole myriad of issues.’’

The early emphasis on social issues in Iowa presents a strong distinction between another crucial early primary state, New Hampshire, where the economy and the deficit are clearly the top issues on the minds of voters and potential candidates. While Iowa and New Hampshire have always been politically distinct — the two states haven’t selected the same candidate in a closely contested GOP nomination since 1976 — this year the differences seem starker than ever.

In Iowa, the cattle calls start with a prayer, and the Tea Party movement is colored with a strong strand of social conservatism. Six out of 10 caucus-goers in 2008 said they were born-again evangelical Christians, according to entrance polls of the Republican caucus. Eleven percent described themselves as moderate, compared with 34 percent of voters in New Hampshire.

In the Granite State, Republican lawmakers put off a debate on gay marriage because they thought it would distract from discussions around state finances and education. In Iowa, Republicans led an effort to oust three judges whose ruling sanctioned gay marriage.

Matthew Strawn, the chairman of the Iowa Republican Party, said that while social issues may be the first box on the checklist for many caucus voters, fiscal issues will be among the decisive factors.

“The voters I talk to certainly want a candidate who shares their core personal convictions — but that just gets them in the door to help close the deal,’’ Strawn said. “The deal’s going to be closed when they see issues pertaining to leadership on job creation, on fiscal matters like reining in entitlements and federal spending.’’

Iowa party caucuses are decided by a relatively small group of the core party faithful, who are willing to brave a cold winter’s night to go cast their vote. In 2008, just 120,000 voters decided the Republican contest, which means that the most organized groups can usually yield the greatest turnout. For decades in Iowa, religious conservatives have been the most reliable at getting voters to the caucuses.

That has put the emphasis on social issues, even while national Republicans are eager to shift the playing field to the economy. An NBC-Wall Street Journal poll in late February found nearly two-thirds of Republican primary voters would be more likely to vote for a candidate who focused more on the economy than social issues.

Those results offer encouragement for Mitt Romney, former governor of Massachusetts, who is planning to stake his presidential bid on economic concerns. It also helps explain why he’s placing less emphasis on Iowa — where social issues are prominent — and instead pouring more energy into New Hampshire — where fiscal issues rise to the fore.

“Everybody’s focused on the jobs and the economy,’’ King said Wednesday afternoon in a speech to home-schooling activists. “But it’s the culture. It’s not the economy that’s the most important thing.’’

King and other social conservatives argue that they can fix the economy by improving family structures with strong family values, but that argument has yet to take hold in swing states like Ohio and Pennsylvania, which have high levels of economic anxiety and unemployment.

At a Des Moines hotel yesterday, about 400 activists gathered for a Conservative Principles Conference that was organized by King. Attendees carried copies of the Constitution in their shirt pockets, and stuck “Fair Tax’’ stickers on their shirts. The speeches by four presidential hopefuls focused on economics and foreign policy, but most made sure to mention social issues.

“Some people may say we should stay away from values, stay away from social issues,’’ said Newt Gingrich, former House speaker. “I’m here to tell you, if we don’t start with values . . . the rest of it doesn’t matter.’’

Gingrich said in an interview that the successful candidate would be the one who could mobilize the same coalition as President Reagan — around social and economic conservatives, and those concerned with national security — and he touched on all three themes in his speech yesterday. Candidates courting Iowa caucus-goers this year note that Mike Huckabee won in 2008 by tapping into social conservatives.

“Here in Iowa, I wouldn’t say that the more economic and fiscal types are being starved for oxygen. But they’d better check their scuba tanks,’’ said Dennis Goldford, a political science professor at Drake University. “Up to now, the main activity has been around social and religious conservatives.’’

Governor Haley Barbour of Mississippi, who has previously staked his ground largely on fiscal issues, got emotional on Friday when he brought up abortion before a group of pastors during a closed-door conference.

“We’re doing everything that we can to stop abortion in our state,’’ Barbour said, according to a video of the speech he posted online. “And if I run for president and get elected president, I will come to the office with that attitude. Which is about 180 degrees different from the attitude from the person we have in there now.’’

But the next day, speaking before a broader audience of activists at King’s conference, he turned his attention to the economy.