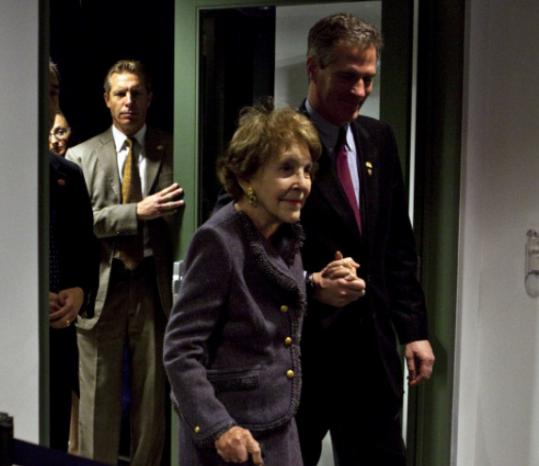 SIMI VALLEY, Calif. — Senator Scott Brown’s aggressive campaign to market his life story — with its accounts of his meager upbringing and violent childhood — took him to hallowed political ground last night for an address at the Ronald Reagan Presidential Library.

Brown’s speech and book-signing here, at the invitation of Nancy Reagan, the president’s widow, put the Massachusetts Republican in the company of some of the GOP’s heavyweights, each invited to take part in ongoing celebrations of what would have been President Reagan’s 100th birthday this month.

Potential Republican presidential candidates Sarah Palin and Newt Gingrich have spoken here in the past several weeks, and former defense secretary Donald Rumsfeld is scheduled for a speech and book-signing in March.

“Scott Brown burst onto the scene last year as a national figure and this reinforces his image as a significant player in national politics,’’ said Whit Ayres, a Republican political strategist.

Brown’s appearance at the hilltop temple to the Republican icon has been the highpoint of his brief but far-flung tour to support his autobiography, “Against All Odds.’’ The book has attracted wide interest for Brown’s portrayal of beatings he suffered at the hands of his stepfathers and of sexual abuse by a male camp counselor when Brown was 10.

“In writing the book it wasn’t hard to pull up the details of some of the adversity that came my way,’’ he said to the gathering of about 300 last night. “When a 6-year-old is taking the best punches of a drunken stepdad, when a kid can’t even find safe haven at a Bible camp, I won’t lie — it leaves a mark.’’

The event was not a fund-raiser, according to Brown’s staff, though he is seeking to maximize the political value of the book. Brown received approval from federal election officials to buy several thousand copies of his book with campaign money to give to friends and supporters, with the royalties from those books going to charity.

The tour featuring book-signings, speeches, a flurry of national interviews, and three private fund-raising events took Brown through Texas and California this week; appearances in Florida and New England follow.

A line of about 50 people awaited Brown at the book-signing before last night’s speech.

“I liked his slogan, ‘Gas up the truck,’ ’’ said one admirer, John Perry, 49, who lives in Los Angeles, owns a security firm, and followed Brown’s run for office on Fox News. “He was an inspiration to me: The hard-working ordinary man. And he’s almost as good-looking as me.’’

In his speech, Brown pronounced himself a product of Reagan’s legacy, crediting his rise not to the Tea Party movement that provided much money and manpower to his campaign, but to the Bay State’s “Reagan Democrats,’’ who also lifted the Gipper to victory twice in the stoutest of Democratic strongholds.

Those aging Reagan Democrats from the 1980s “are still a mighty force in my state and across this great country, otherwise I would not be here as the proud successor to the late Senator Ted Kennedy,’’ said Brown, recounting encounters on the campaign trail with union members who privately vowed their support.

His mostly biographical address also lauded the leadership and legacy of Reagan and affirmed Brown’s trust in his ideals, including his belief in the ability of the people, not government, to solve problems.

His appearance “at the altar of the Republican Party’’ will boost his credentials among national activists, who are important sources for campaign donations, said Jennifer Duffy, who studies Senate campaigns at The Cook Political Report.

“Brown has come to the recognition that he’s not going to get those small-dollar donations from all over the country because a lot of that Tea Party money is not going to be there for him,’’ Duffy said. “He will have to expand his donor base.’’

Some Tea Party groups that help Brown get elected have grown disenchanted after he sided with Democrats on such weighty matters as Wall Street reform and a nuclear-arms treaty with Russia. In recounting last night how he got elected, Brown did not mention the Tea Party.

Instead, he pointed to the model of Reagan and to the man Brown replaced in the Senate.

“To this day, I keep on the mantel in my office a picture of Ted Kennedy. It reminds me not only of somebody I liked and admired, but also of a promise I made to my friends back home to work with good people wherever I find them,’’ Brown said.

The speech and book tour find the senator at the beginning of a new chapter in his career. Brown is no longer the GOP’s hot new commodity. The Republican landslide in the November election elevated many new faces, such as Senator Marco Rubio of Florida — already being measured as future presidential stock — and Senator Rand Paul, the Tea Party firebrand from Kentucky.

And with the Democratic Party now holding a smaller majority in the Senate, Brown has lost some leverage as one of the few centrist Republicans willing to cut deals and provide the key vote to overcome a filibuster.

Much of Brown’s speech was a sales pitch — for himself and his Republican credentials and for his book. He briefly recounted stories covered in the autobiography, including his nude Cosmo centerfold, which is surely Brown’s most famous personal moment from the Reagan years.

“There’s big pressure being a first-time author, especially when you’re out there talking about your life story,’’ Brown joked. “I haven’t felt so exposed since I appeared in Cosmopolitan magazine back in 1982.’’

Mark Arsenault can be reached at MArsenault@globe.com.