Born on 9/11, shooting victim was cherished as a ‘face of hope’ 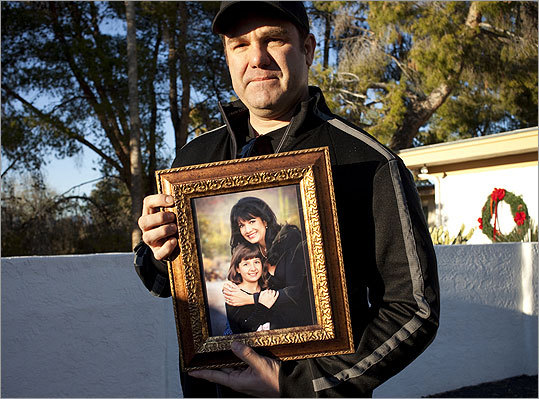 NEW YORK — Christina Green was on the student council of her elementary school, so on Saturday her mother’s friend thought she might enjoy seeing government in action: the local congresswoman meeting with constituents outside a supermarket near Christina’s home.

“I allowed her to go, thinking it would be an innocent thing,’’ said the girl’s mother, Roxanna Green, 45.

It did not turn out that way. A gunman shot Representative Gabrielle Giffords, leaving her in critical condition, and his fusillade killed six people, including Christina, a 9-year-old who loved animals and volunteered at a children’s charity.

“It was an emotional time for everyone in the family, but Christina’s birth was a happy event and made the day bittersweet,’’ her mother said in a telephone interview from their Tucson, Ariz., home.

Christina, who was born when the family was living in West Grove, Pa., was one of the 50 “Faces of Hope’’ representing children from 50 states who were born on Sept. 11. Their images were printed in a book, with some of the proceeds going to a Sept. 11 charity.

“From the very beginning, she was an amazing child,’’ her mother said. “She was very bright, very mature, off the charts. She was the brightest thing that happened that day.’’

Her mother, who grew up as Roxanna Segalini in the Bronx and Scarsdale, N.Y., is a registered nurse and has been a stay-at-home mother to Christina and her 11-year-old brother, Dallas.

Christina’s father, John Green, is a supervising scout for the . Her grandfather, Dallas Green, managed the to the 1980 World Series championship and also managed the and the Mets.

Christina, an A student, was interested in politics, so her mother accepted the offer by her friend Susan Hileman to take Christina to the congresswoman’s constituent meeting. John Green told the Arizona Star that Christina was such a good speaker that he “could have easily seen her as a politician.’’

But Christina also seems to have inherited her family’s baseball genes. She was on a Little League baseball team, its only girl, her mother said.

“She was an athlete, a good dancer, a good gymnast, a good swimmer,’’ her mother said. “She belonged to Kids Helping Kids charity and tried to help children less fortunate.’’

Roxanna Green said she hoped that Christina’s death would bring not only justice in the jailing of her attacker but also a national awareness of the cost of a venomous political dialogue.

Here are sketches of the five other people killed in the attack.

John Roll, 63
Named Arizona’s chief federal judge in 2006, US District Judge John M. Roll won acclaim for a career as a respected jurist and leader who had pushed to beef up the court’s strained bench to handle a growing number of border-crime-related cases. Roll was appointed to the federal bench in 1991 by President Bush. He previously served as a state trial judge and as a judge on the midlevel Arizona Court of appeals, and as a county and state prosecutor. Roll was a Pennsylvania native who got his law degree from the University of Virginia. He is leaves his wife, Maureen, three sons, and five grandchildren.
Dorwin Stoddard, 76
Dorwin Stoddard fell on top of his wife, Mavy, when the shooting started. Mavy Stoddard thought the shooting was fireworks in front of the supermarket, but Dorwin knew better and dove to the ground, covering his wife. Mavy Stoddard didn’t know that she had been shot in the leg three times because her husband had fallen on her, said Mike Nowak, pastor of the church that the couple attended. Mavy Stoddard talked to her husband, who was shot in the head, for 10 minutes while he breathed heavily. Then he stopped breathing.
Gabriel Zimmerman, 30
Gabriel Zimmerman, the director of community outreach for Giffords, handled thousands of issues raised by constituents out of the congresswoman’s offices in Tucson and Sierra Vista. Co-workers say Zimmerman, who had a master’s degree in social work, cared passionately about helping people. Zimmerman was one of the Giffords staffers who organized many public events where voters could meet Giffords and talk to her about issues. Zimmerman, who leaves a brother, was engaged to be married.
Phyllis Schneck, 79
When Phyllis Schneck and her husband retired, they spent their winters in Tucson and summers in their native Rutherford, N.J. “They didn’t want to ever have to deal with the snow again,’’ said Schneck’s daughter, B.J. Offutt of Colorado Springs. Schneck, who continued to return to Tucson in the winters even after her husband died in 2007, was a homemaker who raised her two daughters and one son and had a talent for cooking. In retirement, Schneck kept herself occupied by volunteering at her church.
Dorothy Morris, 76
Dorothy Morris was a retired homemaker and secretary who lived north of Tucson in Oro Valley, Ariz. Morris died in the shooting, while her husband George, a retired airline pilot, was hospitalized after suffering a gunshot wound. Sue Blinman, who lives next door in a retirement community, said the couple traveled extensively and escaped Tucson’s summer heat by heading up to their home in the eastern Arizona mountain community of Pinetop. “They were always good neighbors,’’ Blinman said.