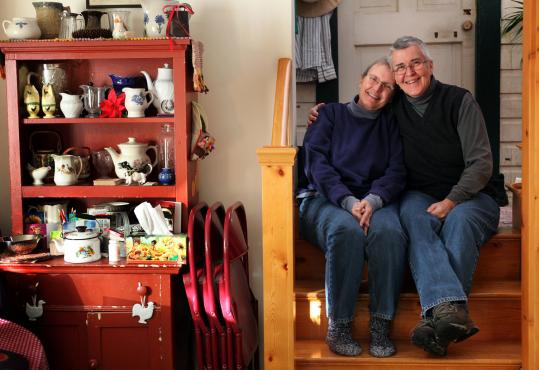 WASHINGTON — Gay-rights activists, acknowledging they will lose momentum for their agenda in Congress when Republicans assume control of the House this week, are pinning their hopes for further gains in 2011 on a series of incremental measures and a host of federal court cases.

Last month’s historic repeal of the ban on gays and lesbians serving openly in the military signaled an expanding political acceptance of fuller integration of gays into American life. Yet activists and observers caution against expecting anything as dramatic from the next Congress.

For instance, a legislative repeal of the Defense of Marriage Act, which prevents the federal government from recognizing same-sex marriages, is virtually out of the question in the near future because of the GOP’s rise to power in the House, advocates said.

Smaller steps may be possible without congressional approval, however. Rights groups plan to push President Obama’s administration to make regulatory changes, such as reversing a 27-year-old ban on gay men donating blood and requiring that federal contractors not discriminate against gays and lesbians.

R. Clarke Cooper, executive director of the Log Cabin Republicans, a group of GOP members who support gay rights, said party leaders have already told him that the economy will take center stage as the new Congress is sworn in Wednesday, forcing major social issues into the background.

Cooper, whose group filed the lawsuit that helped lead to the repeal of don’t ask, don’t tell, said he is focusing on smaller-bore provisions that might appeal to the economic sensibilities of Republicans, such as legislation that would affect taxes on health benefits for same-sex partners and spouses.

The retrenching comes after two years of relatively steady progress. In addition to the repeal of don’t ask, don’t tell, Congress passed a hate-crime bill in 2009 that included protections for gays and lesbians. Obama issued a memorandum extending limited benefits to federal employees with same-sex spouses, such as sick leave to care for them. And in 2010, the US Census recorded same-sex married couples for the first time.

Advocates had hoped to continue racking up milestones with at least two pieces of legislation on Capitol Hill: one granting gays and lesbians protection from discrimination in the workplace and another overturning the Defense of Marriage Act.

Americans for Truth, an Illinois-based advocacy group for heterosexual marriage, is hailing the new Republican majority control in the House as a huge victory that it hopes will put the brakes on further progress toward what it calls “taxpayer-funded homosexuality.’’

“My hunch is the Republicans will try to avoid these issues; they won’t allow them to progress,’’ said Peter LaBarbera, president of Americans for Truth.

Gay marriage is now legal in five states, including Massachusetts, and in the District of Columbia. But because of the Defense of Marriage Act, the federal government cannot grant them benefits and protections available to heterosexual couples, including the ability to file joint tax returns, take advantage of estate tax breaks, and receive spousal benefits offered by Social Security, such as survivor compensation.

Focus will once again turn to the courts, where rulings against the military’s ban on openly gay servicemembers had helped create a favorable political environment for repeal. There are five lawsuits pending across the country that challenge the Defense of Marriage Act, including two key cases in Massachusetts.

One, filed by Attorney General Martha Coakley, alleges that the Defense of Marriage Act forces Massachusetts to discriminate against legally married same-sex couples when it comes to federal funding programs.

“Treating people differently is unfair, and frankly it’s a disadvantage to the government,’’ Coakley said in an interview last week. The law “forces Massachusetts to keep two sets of books.’’

In the other Massachusetts case, 19 plaintiffs allege that the Defense of Marriage Act harms them financially by denying them the same benefits that traditional married couples receive.

Among them are Bridgewater residents Nancy Gill and Marcelle Letourneau, who married in 2004 but pay roughly $1,000 more each year for health insurance than a heterosexual married couple. The US Postal Service, where Gill works, won’t allow her to add Letourneau to her family health plan because of the Defense of Marriage Act, so she has to buy a separate policy.

Jamaica Plain residents Betty Jo Green and Jo Ann Whitehead, who also married in 2004, are denied $1,200 per year in additional Social Security benefits they would receive if they were a heterosexual couple.

In both cases, US District Court Judge Joseph L. Tauro ruled in the plaintiffs’ favor last summer, saying that the Defense of Marriage Act is unconstitutional because it interferes with states’ right to define marriage. The federal government is appealing and is scheduled to lay out its reasoning this month in the First Circuit Court of Appeals, where formal arguments are expected this summer.

The other cases challenging the act have been filed in Connecticut, New York, and California. Gay and Lesbian Advocates and Defenders, which filed the multiplaintiff case in Massachusetts and the one in Connecticut, said that while the cases wend their way through the judicial system, gay-rights advocates should continue pushing Obama for changes.

“I think it’s really important that we not let the administration get a pass,’’ said Lee Swislow, executive director of GLAD. “There are things that can happen without the courts or without Congress.’’

But it’s unclear how much further the president is willing or able to go on gay rights. Obama, before leaving for vacation in Hawaii, said his views on gay marriage are “constantly evolving,’’ but he said he still doesn’t support it. Obama said he believes that civil unions offer the same benefits and protections.

Political analysts said that with Obama facing reelection in 2012, it could be risky for him to go further.

“I think that the risk assessment is going to be driven by the base,’’ said Jennifer Duffy, senior analyst at the nonpartisan Cook Political Report. “How badly do they need the base? Is the base enthusiastic and with him? If they have to fire up that base, then [the Defense of Marriage Act] is one issue that could help.’’

Public opinion has been shifting toward expanding gay-marriage rights, with support increasing from 37 percent in 2009 to 42 percent last year, according to surveys conducted by the Pew Research Center for the People and the Press and Pew Forum on Religion and Public Life. At the same time, opposition dipped below 50 percent for the first time, to 48 percent.

“The public is ready to accept full equality,’’ said Richard Socarides, who was senior advisor to President Clinton on gay civil rights and who last month became president of Equality Matters, a new advocacy group in Washington. “But we have to bring policy makers along.’’