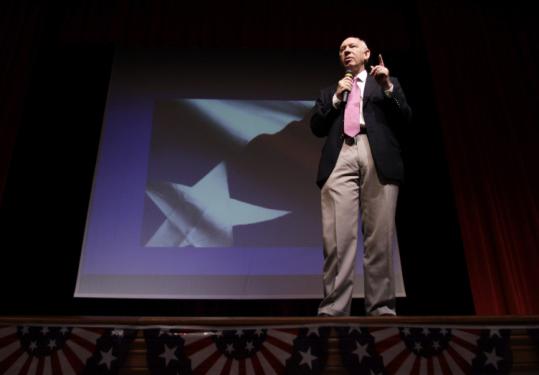 TYLER, Texas — People tell Bill White he picked the wrong election to stage a rescue of the troubled Texas Democratic Party. It’s a Republican year in a Republican state.

But the former Houston mayor, a lawyerly man who speaks so slowly and deliberately that reporters hardly need tape recorders, has not yet faded into the familiar doom Democrats have come to expect from their gubernatorial candidates every four years.

A Democratic shocker in conservative Texas remains about as likely as a blizzard in Houston. Still, a series of recent polls shows a stubbornly tight race, in the single digits, leaving White within striking distance of longtime Republican Governor Rick Perry, who is seeking reelection to an unprecedented third term in November.

A decent showing by Libertarian Kathie Glass, courting many of the same Tea Party conservatives Perry has charmed, could also help White if she draws enough votes away from the governor.

“White has made some inroads in what is a very bad national environment for Democrats,’’ said University of Texas pollster and political scientist Jim Henson. “But it’s a very hard slog for him.’’

Texas hasn’t had a Democratic governor since Ann Richards was defeated by George W. Bush in 1994, and it’s been just as long since any Democrat won statewide office. But Democrats insist Perry is vulnerable.

The same anti-incumbent fervor that threatens to upend the Democratic-controlled Congress is turning voters against Perry, they say.

The Democratic Governor’s Association considers Texas among its “top tier’’ races and has showered more resources on White than any Texas Democratic candidate in the group’s history, giving him more than $2 million so far, officials say.

Some political observers are “shocked’’ that the second-longest serving governor in the United States has a fight on his hands, said Nathan Daschle, director of the association. “But it makes sense when you think about it through the lens of a change election, why voters would start to look for an alternative,’’ he said.

And White sees himself as the perfectly bland alternative to a smooth-talking opponent. He likes to describe the race as the “workhorse vs. the showhorse.’’

Stylistically, there’s no question that White’s droning voice and plain appearance offer a stark contrast to the handsome, gun-toting, backslapping Perry, who shot a coyote while out on his morning jog earlier this year.

Perry is also a highly disciplined candidate who leaves the day-to-day details of his campaign to the professionals. Not White. He immerses himself in campaign minutiae, from the wording of press releases to the scripts of his television ads.

“I haven’t supported a Democrat for governor in a long time,’’ said Wayne Berryman, 71, a retired education administrator who came to see White speak.

White needs people like Berryman, who voted for Perry in the last two elections but says he is tired of him now. Before Perry, no governor had served a full eight consecutive years. Now Perry is looking at a total of 14 if he is reelected.

Tyler, which hasn’t seen a well-funded Democratic candidate in town in years, would seem an unlikely place for the Democrat to be spending valuable campaign time.

But he has been here five times since May, and has visited 73 counties (Texas has 254) since July 1.

It’s part of his strategy to peel away disillusioned Perry supporters and independents, and to limit his losses in the suburbs and rural areas that are staunch Republican strongholds.

Perry has retained a lead in the polls, and analysts such as Henson predict undecided voters will break his way in coming weeks.