Despite vow to address jury, Blagojevich opts not to testify 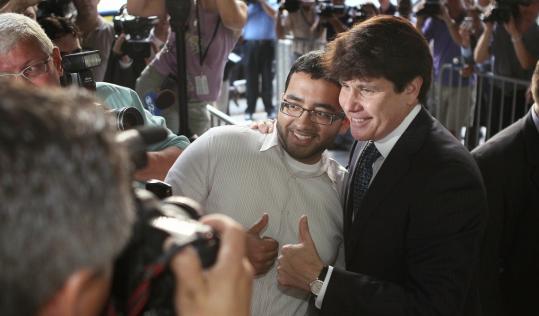 Rod Blagojevich posed with a spectator as he arrived at a Chicago courthouse yesterday. He said he has learned a lot of lessons during the trial, including that he talks too much. (Scott Olson/ Getty Images)
By Mike Robinson and Michael Tarm Associated Press / July 22, 2010

CHICAGO — Rod Blagojevich stood up in court yesterday and told the judge the opposite of what he has been saying for months. He now says that he will not testify in his own defense to charges that include trying to sell an appointment to President Obama’s old Senate seat.

The ousted Illinois governor, who had loudly insisted on television, radio, and even to bystanders outside the courthouse that he would speak directly to jurors, stood in court saying that it was his choice not to testify.

“Is it your decision not to testify?’’ Judge James B. Zagel asked.

“It is my decision,’’ Blagojevich responded, nodding slightly.

His attorneys promptly rested his defense. Prosecutors also rested their case against him.

Outside court, Blagojevich said he believed all along that he would testify and only reluctantly went back on his repeated pledges to do so after his senior lawyer talked him out of it.

“Sam Adam Sr.’s most compelling argument, and I believe the one that swayed me, was that the government in their case proved my innocence, they proved I did nothing illegal and there was nothing further for us to add,’’ Blagojevich said.

Blagojevich also said he has learned a lot of lessons — perhaps the biggest that he talks too much.

His attorneys say neither they nor Blagojevich need to explain why he won’t testify. Sam Adam Jr. says the judge will make that clear to the jury before closing arguments begin Monday.

He said Blagojevich originally intended to testify when the government said it would call more witnesses than it did. He acknowledged that there was some chance of harm to the case — “but is the greater harm going on the stand and saying, we think they proved you guilty?’’

The judge told jurors earlier that the evidence stage of the case had concluded. He also told them not to return until Monday.

It is rare and risky for defendants in federal trials to testify in their own defense, and specialists have said Blagojevich would need to abandon his usual cockiness, humble himself, and not allow himself to be goaded.

On FBI wiretap recordings prosecutors played for jurors, an often profane Blagojevich was heard speculating on what he could get in exchange for Obama’s former Senate seat.

Blagojevich said that the tapes showed his innocence.