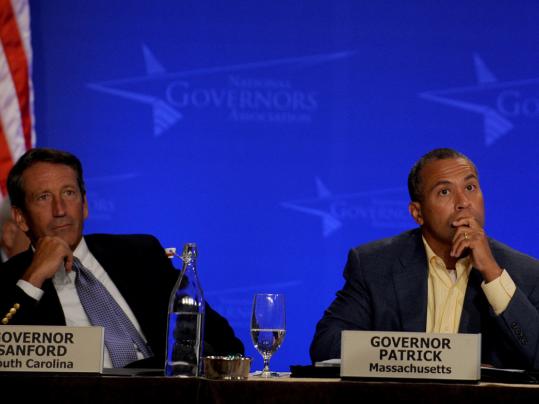 Arnold Schwarzenegger canceled on the National Governors Association meeting in Boston this weekend. He’s in California, struggling with one of the nation’s worst fiscal crises. Bobby Jindal is in Louisiana, fending off his state’s environmental disaster. Florida’s Charlie Crist is home fighting for his political future, attacked from both sides of an increasingly polarized electorate.

These are bleak times for the nation’s governors.

The 36 who showed up for the meeting at the Sheraton Boston in the Back Bay spent the past two days talking about deficits, unemployment, and in the words of one governor, the “cut, cut, cut’’ of state budgets and services.

Normally, a group of three dozen of the nation’s top state officials would elicit chatter about who among them may be the next president. But here, it’s been more about who will be out of office next year. Many of the governors are being forced out by term limits, retirement, or scandal.

The weekend’s host, Governor Deval Patrick, who is also slashing state services and confronting high unemployment, is hardly alone in facing a tough election in November.

“We look at every state in New England as a competitive race,’’ said Governor Haley Barbour of Mississippi, who as leader of the Republican Gov ernors Association began running attack ads against Patrick on Friday.

Quinn noted that he got his job in Illinois last year, only after his predecessor was accused of trying to sell off a US Senate seat and then impeached.

Governor David A. Paterson, a Democrat who replaced a scandalized governor and then ended his own bid for reelection following accusations of witness tampering in a sexual abuse case, said he appreciates the opportunity to discuss budget issues among sympathetic ears.

“We feel like the lone voice of reason,’’ he said. “Rather than just being the [only] adult in the room, you get to be with other adults in a room.’’

The other major topic, beyond the economy and its effect on jobs and state budgets, has been immigration. Hundreds of demonstrators gathered on the lawn in Copley Square yesterday, and briefly spilled into the Sheraton lobby, to protest the appearance of Arizona Governor Jan Brewer, a Republican, who recently signed the nation’s toughest immigration enforcement law. The federal government is suing to have the law overturned, arguing that it gives the state enforcement powers that belong to the federal government.

“The fact of the matter is that immigrants have not caused the economic problems of this country,’’ said Jennifer Zaldana, a 25-year-old Dorchester resident and protest organizer.

Brewer, who stared into television lights nearly every time she wandered into the hotel’s convention hall yesterday, has mostly appeared upbeat, though she said during one public session that she did not anticipate the amount of national attention she would garner by signing the law.

“It’s nice to have the opportunity to get our message out to the public,’’ she said during a brief interview. Brewer said she signed the law because the federal government was not fulfilling its responsibility to protect the borders.

“We will help the feds do their job because it is their responsibility,’’ she said.

Governors in attendance here have been divided on the issue, but generally collegial toward Brewer. Patrick, who has said he would not sign a similar law in Massachusetts, said during a morning interview that he had only spoken with Brewer briefly, and it was to welcome her to Boston.

Quinn said most of the private meetings tend to be free of the “political posturing’’ that often characterizes public rhetoric. Like Patrick, he said he had no personal disagreement with Brewer.

“She’s a nice lady, but I don’t agree with her at all,’’ Quinn said. “I think it’s racial profiling. That’s un-American.’’

Matt Byrne, a Globe correspondent, contributed to this report. Noah Bierman can be reached at nbierman@globe .com.