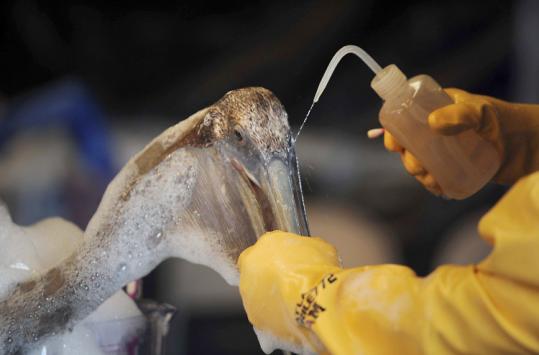 WASHINGTON — Scientists warned yesterday that oil from the spill in the Gulf of Mexico is moving rapidly toward a current that could carry it into the Florida Keys and the Atlantic Ocean, threatening coral reefs and hundreds of miles of additional shoreline.

Government officials insisted that the oil had not yet entered the gulf’s so-called loop current and said they are continuing to monitor the movement of the spill closely. But two independent scientists, analyzing ocean current and satellite data, said the oil is in an eddy that is quickly being drawn into the current, portending a much wider spread of the hazardous slick.

Technicians from , the company that leased the drilling rig, said yesterday that they are still suctioning oil from the drilling pipe lying on the ocean floor 5,000 feet below the surface. They are pulling oil out through a narrow tube at the rate of about 1,000 barrels a day, roughly a fifth of the official estimate of the total leak.

Doug Suttles, BP’s chief operating officer, said the tube could accommodate at least 5,000 barrels a day, but engineers are increasing the flow rate very carefully to avoid sucking up water, which might lead to the creation of the icelike structures, called hydrates, that form in the presence of seawater at low temperatures and high pressures and could clog the pipe.

“If we could get as much as half or more of the total flow, if we could actually see this recovering, say, in excess of 2,000 barrels a day,’’ Suttles said, “we would all be extraordinarily pleased.’’

Millions of gallons of oil have already escaped from the blown well, presenting an enormous challenge to contain it and keep it from killing ocean life and fouling Gulf Coast beaches and wetlands. That task will become immeasurably more difficult if the huge plume of oil moves into the powerful and unpredictable loop current, which carries warm water in a clockwise motion from the Yucatan Peninsula into the northern Gulf of Mexico, then south to the Florida Keys and out into the Atlantic.

But the independent scientists said that a portion of the wide oil slick is circulating in an eddy directly north of the loop current. This eddy, known as a cyclone, spins counterclockwise and is dragging the oil south.

“There is a very, very distinct trail of oil from the oil spill, all the way into this cyclone,’’ said Nan Walker, an oceanographer with the Earth Scan Lab at Louisiana State University. “It looks like the oil is continuing to be dragged around the cyclone, but eventually it’s going to be mixed in with the loop current and make its way south to Florida.’’

Chuanmin Hu, an oceanographer at the University of South Florida, said the amount of oil entering the cyclone has increased sharply in the past few days. “I see a huge oil plume being dragged in that direction,’’ he said. “It’s like a river.’’

Hu estimated that oil that enters the current could reach the Florida Keys in roughly two weeks.

Jane Lubchenco, administrator of the National Oceanic and Atmospheric Administration, said yesterday in an interview on PBS’s “NewsHour’’: “By the time the oil is in the loop current, it’s likely to be very, very diluted. And so it’s not likely to have a very significant impact. It sounds scarier than it is.’’

A new round of congressional hearings into the spill opened in Washington yesterday, with the Senate Committee on Homeland Security and Governmental Affairs taking testimony on the government and private sector response to the spill.