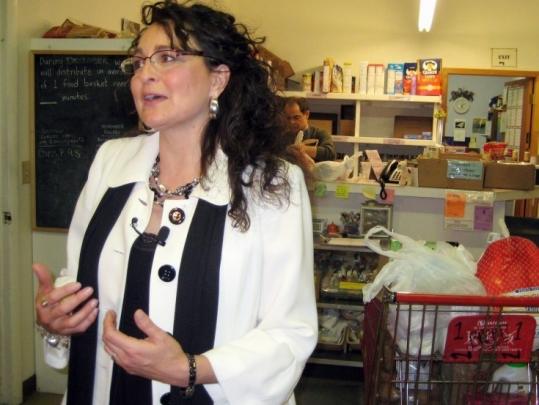 LOVELAND, Colo. - As a mother of seven, Anne Miller already had a whopping grocery bill. When doctors recommended her teenage daughter go on a gluten-free diet, the family food bill went higher than Miller could afford.

So Miller was first in line last week when a food pantry in this northern Colorado city became the nation’s first to promote gluten-free food for needy families that can’t eat wheat.

“Basically the whole family has to eat gluten-free now,’’ said Miller, who walked out of the House of Neighborly Service food bank with a grocery cart full of gluten-free soups, pastas, and pizza dough mix.

The food pantry, founded in 1961, opened its gluten-free section after local activists who can’t eat wheat volunteered to pull it together.

Activists say the food bank is the nation’s first with a special program for people with celiac disease, an intolerance to gluten from wheat or other grains.

Celiac sufferers say that although more gluten-free products are in grocery stores these days, they’re so pricey that many with wheat intolerances simply forgo bread and stick to meat, fruits, and vegetables.

Bill Eyl, 68, president of the national Celiac Sprue Association, was on hand for the opening of the gluten-free food bank. People with wheat allergies and intolerances, he said, can see their food bills triple.

“You walk into a fancy food store and look for the gluten-free bread, and it’s $4 to $6 for a loaf that’s only this big,’’ said Eyl, holding his fingers about 6 inches apart.

The House of Neighborly Service still offers plenty of conventional breads and soups. Volunteers simply cleared out a section for soups and bread mixes without gluten and started asking activists with celiac disease to bring donations. A Denver tortilla maker signed on to bring gluten-free flatbread. Pretty soon several shelves were stacked with gluten-free offerings.

“Food should not be a luxury,’’ said Deanna Olson, a Loveland woman who has celiac disease and brought in donations.

Another volunteer with celiac disease, Dee Valdez, runs a blog support group for people with wheat intolerances. She’s had celiac disease for 17 years and said a top concern of people with a new diagnosis is how expensive gluten-free food can be. Biscuit mix, for example, costs about $2 a box with gluten - or up to $7 without.

“I talked to a mother once who said, ‘I have to choose between feeding all of my kids or taking care of my one daughter who can’t have gluten,’ ’’ Valdez said. “When you know that you’re feeding your kid poison, and you say, ‘My daughter or son is just going to have to live with diarrhea,’ that just breaks your heart.’’

The food bank’s manager, Erin Becerra, said she’s not sure how many people will take advantage of the gluten-free offerings. The pantry now provides monthly baskets of nonperishable food to about 560 families.

Recipients still have to meet food pantry income guidelines and live in the Loveland area, she said. A family of four, for example, has to earn less than about $32,000 a year, and there won’t be an income exception for people with celiac disease.