US vows to tackle teen violence

In Chicago, aides to Obama decry killing of student 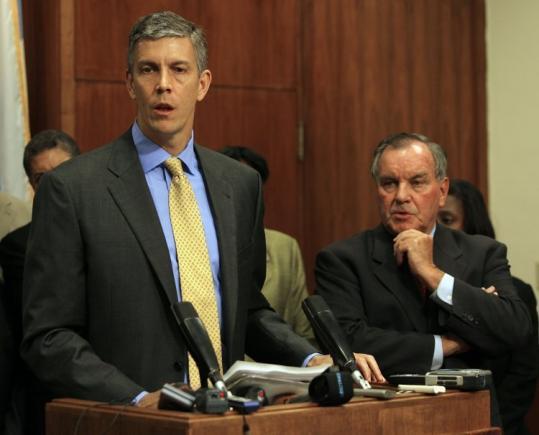 CHICAGO - US Attorney General Eric Holder and Education Secretary Arne Duncan yesterday pledged federal support to fight a surge in youth violence in Chicago and other cities, calling the brutal beating death of a teenager on the city’s South Side a wake-up call for the country.

But neither official offered specifics or outlined any new strategies on how the government would help quell the increase in the number of violent deaths among teens.

Duncan and Holder were sent to Chicago by President Obama to meet with officials, parents, and students from Christian Fenger Academy High School after the vicious beating of a 16-year-old sophomore whose after-school death on Sept. 24 was captured on a cellphone video.

Holder said the disturbing images of the fatal beating of Derrion Albert have been a wake-up call for the country and a call to action for the Obama administration.

“Youth violence is not a Chicago problem, any more than it is a black problem, a white problem, or a Hispanic problem,’’ Holder said. “It is an American problem.’’

A study on youth violence funded by the Department of Justice and released yesterday found that 60 percent of respondents had been exposed to violence in the past year, and nearly half had been assaulted at least once, Holder said. Exposure to violence included a range of incidents, from minor to serious. The findings also appeared Monday in the journal Pediatrics.

Obama’s administration has asked for $25 million in next year’s budget for community-based crime prevention programs, Holder said. Duncan said an emergency grant of about $500,000 would go to Fenger for counselors or other programs.

Duncan would not say when or where the meeting with Fenger’s principal, students, and parents took place yesterday, but he and Holder had breakfast with Daley and community and religious leaders at the Four Seasons Hotel off the ritzy Magnificent Mile downtown.

When asked why the meeting wasn’t held near Fenger, on the city’s far South Side, Duncan said he didn’t want to disrupt the school with a media “circus.’’

Some Fenger students who did not attend the meeting said they appreciated the visit from Duncan and Holder because it showed that the outside world cares about them. But they said the power to stop the violence ultimately lies with them.

“It’s up to us to make a change,’’ said junior Shanequa Burgess, 17. “All of these adults are doing what they need to do to help us.’’

Some activists, parents, and students say the violence at Fenger, and at schools citywide, is the unintended byproduct of an ambitious plan to improve education in Chicago called Renaissance 2010.

Since 2005, dozens of Chicago schools have been closed and thousands of students reassigned to campuses outside their neighborhoods - and often across gang lines - as part of Renaissance 2010. While the plan has resulted in replacing failing and low-enrollment schools with charter schools and smaller campuses, it has also led to a spike in violence that has increasingly turned deadly, critics say.

Duncan, who as the former head of Chicago’s public schools helped to implement Renaissance 2010, said it was ridiculous to blame the plan for the violence that claimed Albert’s life.

“Chicago won’t be defined by this incident but rather by our response to it,’’ Duncan said. “We should use this moment to go forward together . . . we need to get dramatically better.’’

Before the 2006 school year, an average of 10-15 public school students each year were fatally shot. That soared to 24 deadly shootings in the 2006-07 school year and 34 deaths and 290 shootings last school year.

Albert, an honor roll student at Fenger, was attacked when he got caught up in a mob of teens on the city’s South Side. So far, four teens have been charged in his death.