Blue-collar environmentalists rise up in Calif. 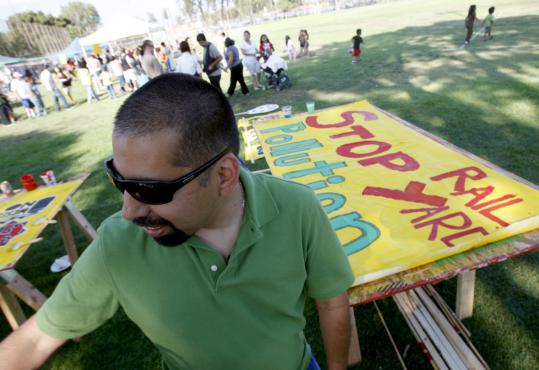 COMMERCE, Calif. - It is 8:30 a.m. on a Sunday. Along streets of grimy stucco bungalows with bougainvillea, American flags, and “Beware of Dog’’ signs on chain-link fences, a couple of residents are hosing down lawns.

It ought to be quiet, but it’s not.

Behind the garden walls of Astor Avenue, there’s a chugging and a hissing and a clanking and a squeaking. Two yellow locomotives, hooked to cars piled high with metal containers, idle on the track of the . Their stacks spew gray plumes of smoke.

“We call this cancer alley,’’ said Angelo Logan, who grew up on this Commerce street about 7 miles southeast of downtown Los Angeles. “And we’re fed up.’’

Logan, 42, is part of a new generation of urban, blue-collar environmentalists.

He is executive director of the East Yard Communities for Environmental Justice, with a paid staff of four and 200 members who join for $5 a year. They recruit door to door in communities in eastern Los Angeles County, where more than three-quarters of residents are working-class Hispanics.

East Yard operates from a storefront on Commerce’s Atlantic Avenue, a street lined with cheap motels and fast-food joints. It has no celebrities on its board, no publicity staff churning out press releases, no in-house lawyers to go toe-to-toe with $500-an-hour corporate law firms.

But in California, where Hispanics, blacks, and Asians collectively outnumber non-Hispanic whites, political power is shifting. Here especially, but also across the country, mainstream foundations, which had long supported environmental groups led by white lawyers and policy wonks, have begun to channel grants to community organizations run by Hispanics and blacks who see clean air and water as civil rights.

In Southern California, these environmental justice activists, as they are called, wage war in the dense corridor that runs from the massive ports of Los Angeles and Long Beach through cities that line Interstate 710 - Carson, Compton, Huntington Park, Commerce - and on through Riverside and San Bernardino counties, with their vast distribution warehouses.

“There are no buffer zones,’’ said Gilbert Estrada, a teacher who cofounded the East Yard group with Logan. “We are the buffer zones.’’

Each year, pollution from ships, trucks, and trains that move goods through the region contributes to an estimated 2,100 early deaths, 190,000 sick days for workers, and 360,000 school absences, according to the California Air Resources Board.

Last year, 40 percent of the containerized cargo entering the United States flowed though the Los Angeles and Long Beach ports. That’s $335 billion worth of goods, much of it from China and other Pacific Rim nations to be shipped over the Rockies.

Despite the current recession, the ports expect traffic to triple in coming decades - a prospect that Logan calls “frightening.’’ Community groups want to block a massive rail yard expansion and a new yard that city officials say will be the greenest ever built. And they are battling a plan to add eight to 10 lanes to I-710, even as the ports upgrade to cleaner trucks.

Railroad officials say diesel emissions from their trains will drop by two-thirds by 2020 due to new regulations - an assertion that Logan disputes.

Tall poles bristle with flood lights. Blue chassis are piled three-high near a maintenance yard where engines are tested at high-throttle.

“There’s stadium lighting, and so much noise and vibration 24/7 that people suffer sleep deprivation and hypertension,’’ Logan said on a recent tour. “People worry the stucco’s shaking off their houses.’’

In his red Prius (“I had to stop driving a clunker’’), he swung by a battery recycling plant that spews out lead emissions, an incinerator served by 150 trash trucks a day, a pesticide distributor, chrome platers, auto body shops.

“It’s not just one issue,’’ he said. “All these things are bombarding us. . . . These neighborhoods are targets because there isn’t a base of people demanding a clean environment.’’

Back when he was a factory worker, Logan thought environmentalism was “about saving the whales.’’

Now he defines it in terms of local victories: stopping the expansion of a rail yard, a hazardous waste plant, or even saving a neighborhood’s old ficus trees.

“Before we got engaged, people weren’t saying, ‘Let’s make this the cleanest, greenest city,’ ’’ he said. “That came about because people in power had to respond to the anger.’’

In Bandini Park, big rigs on I-710 thundered past the basketball court, drowning out conversation.

Logan pointed to the home of a volunteer whose funeral he recently attended. “Even though she was ill, she would always come to testify,’’ he said. “Folks who never smoked a day come down with lung cancer, throat cancer.’’

His activism, he said, grew out of the influence of a Mexican-American grandmother, who would talk to him about social justice, and an Irish-American grandfather, who joined a mine workers strike.

, When Logan started East Yard eight years ago, he worked odd jobs and financed East Yard activities out of his own pocket. The group now gets money from a dozen philanthropies.