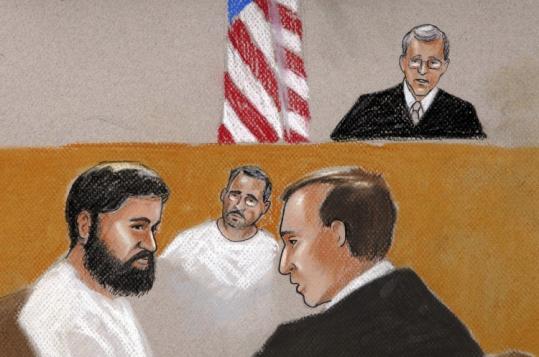 In this artist’s rendition, Najibullah Zazi (left) appeared before US Magistrate Judge Craig Shaffer at a bail hearing in Denver.
By Tom Hays and Devlin Barrett Associated Press / September 25, 2009

NEW YORK - An Afghan immigrant who received explosives training from Al Qaeda went from one beauty supply store to another, buying large quantities of hydrogen peroxide and nail polish remover, in a chilling plot to build bombs for attacks on US soil, authorities charged yesterday.

Najibullah Zazi, 24, a shuttle driver at the Denver airport, was indicted in New York on charges of conspiracy to use weapons of mass destruction. Investigators said that they found bomb-making instructions on his computer’s hard drive and that Zazi used a hotel room in Colorado to try to cook up explosives a few weeks ago before a trip to New York.

Over the past few days, talk of the possible plot set off the most intense flurry of national terrorism warnings in the United States since shortly after the Sept. 11, 2001, attacks in New York and Washington, D.C.

Prosecutors said they have yet to establish when and where the Zazi attacks were supposed to take place. But Attorney General Eric Holder said, “We believe any imminent threat arising from this case has been disrupted.’’

A law enforcement official said Zazi had associates in New York who were part of the plot.

Zazi was arrested in Denver last weekend and was charged along with his father and a New York City imam with lying to investigators. Authorities said in the past few days that they feared Zazi and others might have been planning to detonate homemade bombs on New York trains, and warnings went out to transit systems and stadiums nationwide.

A law enforcement official said yesterday that authorities had been so worried about Zazi - his Sept. 10 trip to New York City coincided with a visit by President Obama - that they considered arresting him as soon as he reached the city.

Zazi left a Denver court yesterday without commenting and will be transferred to New York. He has denied he is a terrorist.

In three unrelated terror cases around the nation yesterday:

■Michael C. Finton, a 29-year-old man who idolized American-born Taliban soldier John Walker Lindh, was arrested after attempting to detonate what he thought was a bomb inside a van at a federal courthouse in Springfield, Ill., officials said. FBI agents had infiltrated the alleged plot.

■Two North Carolina men under arrest since July on international terrorism charges were also accused of plotting to kill US military personnel.

■A 19-year-old Jordanian national was arrested on charges he plotted to bomb a downtown Dallas skyscraper. Hosam Maher Husein Smadi placed what he thought was a bomb at the 60-story Fountain Place office tower, according to a statement from the US attorney’s office in Dallas. The decoy device was given to him by an undercover FBI agent.

In the Zazi case, a government motion seeking to deny bail laid out a chronology of the alleged scheme. The court papers filed in Brooklyn federal court also refer to “others’’ who bought bomb materials with Zazi.

According to prosecutors’ account, Zazi - a legal US resident who immigrated in 1999 - began plotting as early as August 2008 to “use one or more weapons of mass destruction.’’ That was when he and others traveled from Newark to Pakistan, where he received the explosives training, prosecutors said.

After returning in early 2009, he moved to the Denver suburb of Aurora, where he used a computer to research bomb ingredients, prosecutors said.

Security video and receipts show that some purchases were made near a hotel, according to court papers. On Sept. 6, Zazi checked into a suite at the hotel with a kitchen, the papers say. He tried to contact an associate “seeking to correct mixtures of ingredients to make explosives.’’

“Each communication,’’ the papers say, was “more urgent than the last. . . . Zazi reportedly emphasized in the communication that he needed the answers right away.’’