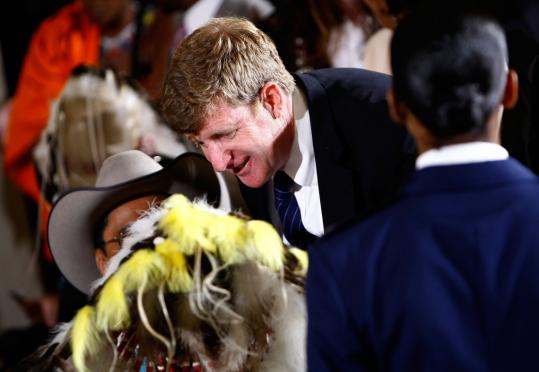 Representative Patrick Kennedy, shown at the White House Medal of Freedom ceremony Wednesday, said he has spent much of the summer with his father, Senator Edward M. Kennedy. (Win Mcnamee/Getty Images)
By Globe Staff and Associated Press August 14, 2009

A powerful, deep-pocketed new coalition launched a $12 million TV ad campaign yesterday in a dozen states in support of a health care overhaul.

Notably, the coalition does not include the insurance industry, which has been increasingly cast by Obama and Democrats as the bad guy in the debate.

The ad highlights what the group says would be the benefits of a health care overhaul, particularly for those who have insurance.

“It means you can’t be denied coverage for a preexisting condition or dropped if you get sick,’’ the narrator says. “It means putting health care decisions in the hands of you and your doctor. It means lower costs, a cap on out-of-pocket expenses, tough new rules to cut waste and red tape, and a focus on preventing illness before it strikes.

“So what does health insurance reform really mean? Quality affordable care you can count on,’’ the narrator concludes.

Even as public skepticism over the Democrats’ health overhaul plans boils over at town hall meetings nationwide, the ad is the latest example of the odd-bedfellows help Obama is getting. For PhRMA, the ads are a piece of a larger effort whose cost could reach $150 million or above through the fall. Drugmakers and other groups stand to gain if millions more people gain access to insurance.

Watchdog groups launch earmark-tracking websites
Two nonpartisan watchdog groups in the nation’s capital announced yesterday that they have joined forces to create a database showing campaign cash to members of Congress and the earmarks (otherwise known as pork barrel projects) that they requested.

The online databases (available at www.opensecrets.org and at www.taxpayer.net) allow the public to see how much their elected officials secured in earmarks during the 2008 and 2009 fiscal years and who benefited from their largesse - then track how much those beneficiaries contributed to lawmakers’ campaign war chests.

More time with father a blessing to Rep. Kennedy
WASHINGTON - Representative Patrick Kennedy says he has found something of a blessing in the curse of cancer afflicting his father, Senator Edward M. Kennedy: The family has been able to spend much more time with him.

“It’s been a chance for us to bond and be together and share a special time together that we would never have had together had he been taken from us,’’ the Rhode Island Democrat said. “That’s a big gift.’’

The congressman said he has spent most days this summer with his 77-year-old father, sitting on the porch of their oceanside home in Hyannis Port, sharing old stories about family, friends, and politics.

“In a different sense, it has been a very joyous time because we have had so much more time than any of the doctors had predicted,’’ the younger Kennedy said.

He attended a White House ceremony Wednesday where President Obama awarded the Presidential Medal of Freedom to his sister Kara on his father’s behalf.

After the award ceremony, Obama unexpectedly ushered Representative Kennedy into the Oval Office for a private meeting. “He shuts the door and starts asking me about how my father is,’’ Kennedy said. “I told him he’s understanding everything that is going on, he’s following everything.’’