March on Washington for gay marriage rights is being planned for Oct. 11 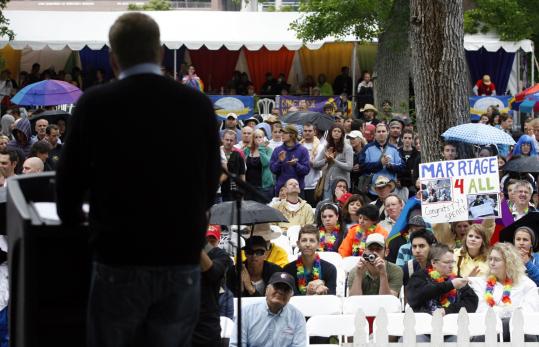 SALT LAKE CITY - An activist who worked alongside slain gay rights leader Harvey Milk announced plans yesterday for a march on Washington this fall to demand that Congress establish equality and marriage rights for the lesbian, gay, and transgender community.

Cleve Jones said the march planned for Oct. 11 will coincide with National Coming Out Day and launch a new chapter in the gay rights movement. He made the announcement during a rally at the annual Utah Pride Festival.

Jones stirred up a crowd of thousands just blocks from the Salt Lake City headquarters of The Church of Jesus Christ of Latter-day Saints. The church was part of a coalition of conservative groups that worked last fall to pass California's Proposition 8, which overturned a court ruling legalizing gay marriage.

Mormons were among the coalition's most vigorous volunteers and contributors, but Jones said he's had thousands of e-mails from Latter-day Saints who apologized and said they were uncomfortable or ashamed by the faith's participation.

"It's unfortunate that a church and a people who experienced persecution in the past could not come to some accommodation that would allow them to maintain their faith without so vociferously seeking to deny other people their rights," Jones said.

Gay marriage is legal in six states. A handful of others allow civil unions for same-sex couples and about 40 either bar the recognition of same-sex marriage or have explicitly defined marriage - through legislation or constitutional amendments - as between a man and a woman.

Jones was a protege of Milk, San Francisco's first openly gay elected official, who was shot and killed by a fellow member of the Board of Supervisors in 1978.

In the mid-'80s Jones founded the NAMES Project, the AIDS memorial quilt that recognizes the more than 80,000 Americans who have died from HIV/AIDS.