Another year without swallows

Festival goes on without birds at historic mission 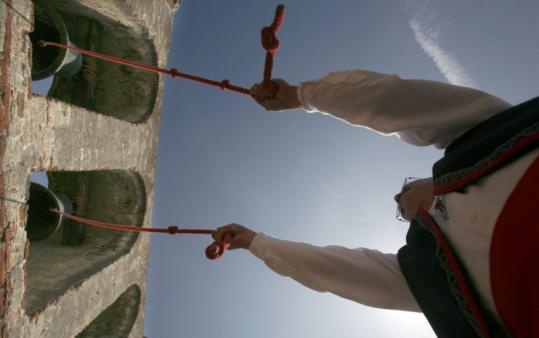 SAN JUAN CAPISTRANO, Calif. - There was a time, people say, when the swallows swarmed San Juan Capistrano in the days just before winter gave way to spring. Every year, locals say, the white-bellied birds filled the sky like a rain cloud. They returned to their nests in the old adobe mission as church bells rang, heralding their arrival.

But the mission bells rang again and again during this year's Festival of the Swallows, which ended Sunday, and the tiny birds just didn't make an appearance. Truth is, they've hardly been seen at the mission for years.

Perhaps, some skeptics say, the birds' return was never quite as it has been described in lore. There's little scientific evidence that cliff swallows ever migrate to the same spot year after year.

Others say the birds' nests were knocked down a decade ago during preservation work at the mission. Avian specialists attribute the dearth of swallows to a general reduction in all bird numbers across Southern California - the inevitable result of building homes and shopping centers as far as the eye can see.

Yet the miracle of the swallows' return to Mission San Juan Capistrano every spring remains undiminished in this historic city.

Over the years, locals have tried desperately to lure the birds back. They consulted with specialists, installed ceramic nests, and played recorded bird song, all for nothing. The small numbers of swallows that now make their way to south Orange County have come to prefer the eaves of a nearby college, the nooks and crannies of shopping malls, and the spaces underneath Interstate 5, which cuts the city in two.

In 2000, Charles R. Brown, a professor of biological science at the University of Tulsa and a specialist on cliff swallows, visited the mission and offered a few ideas to help bring the birds back - including installing ceramic nests.

The mission put up a few ceramic nests but then took them down because they were not historically authentic.

Still, the weeklong festival marking the birds' return must go on. A few swallows were spotted earlier in the week by some eagle-eyed festivalgoers, but the birds quickly flew away.

But, as the locals will tell you, there's always next year.