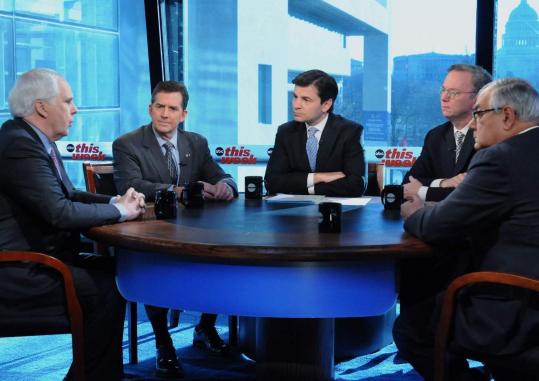 WASHINGTON - Senate Republican leader Mitch McConnell said yesterday the massive stimulus bill backed by President Obama and congressional Democrats could go down to defeat if it's not stripped of unnecessary spending and focused more on housing issues and tax cuts.

The Senate version of the bill, which topped out at nearly $900 billion, is headed to the floor for debate. The House bill totaled about $819 billion and earned no Republican votes, though it easily passed the Democratic-controlled House. At some point lawmakers will have to compromise on the competing versions.

McConnell and other Republicans suggested that the bill needed an overhaul because it doesn't pump enough into the private sector through tax cuts and allows Democrats to go on a spending spree unlikely to jolt the economy.

Appearing on CBS's "Face the Nation," the Republican leader also said Democrats had not been as bipartisan in writing the bill as Obama had said he wanted.

"I think it may be time . . . for the president to kind of get a hold of these Democrats in the Senate and the House, who have rather significant majorities, and shake them a little bit and say, 'Look, let's do this the right way,' " McConnell said. "I can't believe that the president isn't embarrassed about the products that have been produced so far."

Senator Jon Kyl of Arizona, the number two Republican in the Senate, said he was seeing an erosion of support for the bill and suggested that lawmakers should consider beginning anew.

"When I say start from scratch, what I mean is that the basic approach of this bill, we believe, is wrong," he said yesterday on "Fox News Sunday."

Obama said in an interview yesterday that he is confident Republicans will come around to support the final version of his economic recovery legislation.

"I've done extraordinary outreach, I think, to Republicans because they have some good ideas and I want to make sure those ideas are incorporated," Obama said. However, he said the important thing is that the bill passes, not the party vote.

Obama also told NBC's Matt Lauer during a live pre-Super Bowl interview that his administration would announce plans to spend the second $350 billion round of the bank bailout after Congress deals with the separate stimulus plan.

Senate Democrats defended their almost $819 billion version of Obama's stimulus plan, which is set for debate this week, and said they were open to considering changes by Republicans. But they said the unrelentingly bleak economic news demanded action.

"We cannot delay this," said Senator Richard J. Durbin of Illinois, the Democrats' number two leader. "We can't engage in the old political rhetoric of saying, 'Well, maybe it could be a little bit better here and a little bit better there.' We've got to pull together."

Under Obama's plan, strained state budgets would receive a cash infusion, projects for roads and other infrastructure would be funded, and "green jobs" in the energy sector would be created. In its centerpiece tax cut, single workers would gain $500 and couples $1,000, even if they don't earn enough to owe federal income taxes.

Among the major changes Kyl said would be needed to gain Republican support in the Senate was the tax rebate for individuals and couples, which he criticized as going to too many people who didn't pay the tax to start with.

He also criticized the bill for seeking to create nearly three dozen government programs and giving states far more money than they need.

Durbin argued that $1 out of every $3 in the bill goes to tax cuts and defended it as aimed at helping working families. While he contended that Democrats were "very open" to Republican proposals, he cited only what he said were calls for more money in job-creating public works projects, typically a Democratic priority.

Senator Jim DeMint, Republican of South Carolina, characterized the proposal as "a spending plan. It's not a stimulus plan. It's temporary, and it's wasteful."

Representative Barney Frank, Democrat of Massachusetts, the chairman of the House Financial Services Committee, said on ABC's "This Week" that the bill was designed to help people who have been damaged in the economic meltdown as well as stimulate the economy.

The House last week passed an $819 billion stimulus bill without any Republican support. After the Senate acts, lawmakers will need to compromise on the competing versions.

On another matter, Frank said Obama will require banks receiving government funds under the $700 billion financial bailout bill to increase their lending to businesses and consumers.

"I think you're going to see the Obama administration, having learned from that, push for much more lending," Frank said. "There are going to be some real rules in there."