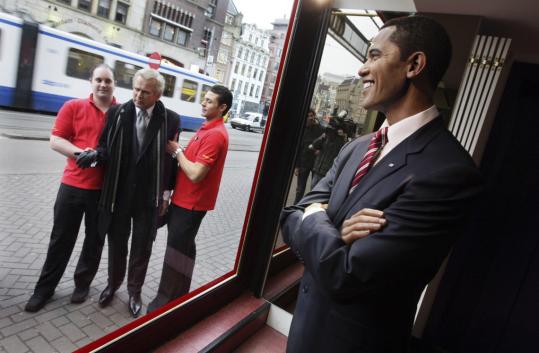 A wax figure of President-elect Barack Obama is on display at Madame Tussauds in Amsterdam. Meanwhile, a figure of his predecessor was carried out of the wax museum. (Evert Elzinga/ Associated Press)
By Mary Jordan Washington Post / January 18, 2009
Text size – +

LONDON - As Micha Wyatt plans an inaugural bash at the Chicago Rib Shack in London, she is basking in the new warmth toward Americans overseas.

It's cool to be an American again, Wyatt said. "I'm tired of pretending I'm Canadian."

From Jakarta to Johannesburg, Americans who travel or live abroad are finding that instead of being scolded about the Iraq war, the military prison at Guantanamo Bay, Cuba, or US climate change policy, they are being hugged when strangers hear their accent.

"People would question me: 'Where are the weapons of mass destruction? What is America doing?' " said Wyatt, 38, a San Francisco native.

Since Barack Obama's election, she said, people want to hang out at American parties and talk about the latest news from Washington: "There is a buzz about America now."

Many Americans interviewed in Latin America, Asia, Africa, and Europe said that for years they have felt "targeted" by critics of US policies. They said they often did not volunteer that they were American, and several said they even dropped the word "Ottawa" into conversations to try to avoid confrontations.

Now, even in countries such as Japan and Australia, where Americans were generally not taken to task over Bush policies as they were in Europe, Americans interviewed said they suddenly have new cachet. Some compared the feeling to the heady days after the fall of communism.

"It was cool to know an American" in the early 1990s, said Tanya Pampalone, a Los Angeles native who has long lived abroad and resides in Johannesburg.

But the Bush era has been tough, she said, as many saw the United States playing the "bad guy" role in the world. She, like others interviewed, said she hesitated waving the red, white, and blue in public.

But as goodwill toward Americans has returned, she recently allowed her 5-year-old daughter to bring a little American flag she had been waving in the car to a restaurant.

"A week before, I would have said to her, 'Just put the flag in the car. Let's not draw attention to ourselves,' " Pampalone said. But this time, she told her daughter, " 'Great, take the flag,' and when she walked around saying, 'Yes, we can!' everyone in the restaurant was smiling.' "

Organizations of expatriates, including Democrats Abroad, say there have never been so many celebrations outside the United States to mark the swearing-in of an American president.

In addition to sold-out balls in capitals around the globe, many other Obama bashes are planned. In Cambridge, England, people are gathering to listen to Obama's speech at a Hawaiian luau.

In Antigua, Guatemala, Americans have hired a disc jockey to play Stevie Wonder, Bob Dylan, and other tunes Obama keeps on his iPod. In Jakarta, Indonesia, where Obama spent time as a boy, students from his former elementary school will perform a traditional dance at a party with some of his old classmates.

David St. Onge, 57, a John McCain supporter who works in the pharmaceutical industry and was in Moscow recently, said he has noticed a change in how his Russian clients treat him.

"They seemed to think better of Americans because we elected a black man as president," he said as he walked through Red Square. "They think we're more enlightened now."