Too little, too late - but McCain takes Missouri 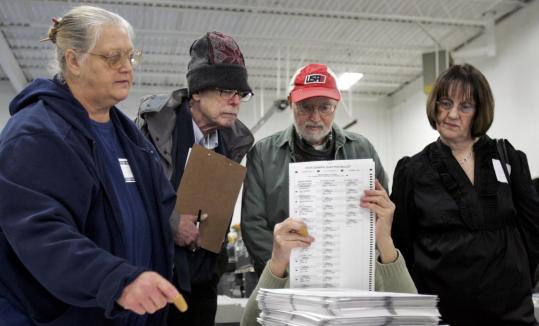 JEFFERSON CITY, Mo. - Republican John McCain has defeated President-elect Barack Obama in Missouri, the last state to be decided in the 2008 presidential election.

With all jurisdictions reporting complete but unofficial results, McCain led Obama by 3,632 votes yesterday, with more than 2.9 million cast. McCain's narrow victory breaks a bellwether streak in which Missourians had picked the winning presidential candidate in every election since 1956.

Both McCain and Obama had spent considerable resources trying to win Missouri, a state that Obama ultimately did not need for his national victory. Obama won 365 Electoral College votes. Missouri's 11 electoral votes will give McCain 173.

Romney says a bailout would hurt automakers
Leading up to the Michigan presidential primary, Mitt Romney cast himself as the savior of the beleaguered auto industry and jumped all over rival John McCain when he gave some "straight talk" that "some of the jobs that have left the state of Michigan are not coming back."

Romney, whose father helped turn around American Motors in the 1950s before becoming the state's governor, won the January primary to keep alive his ultimately unsuccessful presidential bid.

Fast-forward 11 months, and Romney is speaking out against a federal bailout of the auto industry. If Congress were to listen to the top executives of Chrysler, Ford, and GM and give $25 billion in loans, "you can kiss the American automotive industry goodbye," the former Massachusetts governor wrote in an opinion piece in yesterday's The New York Times.

"It won't go overnight, but its demise will be virtually guaranteed,"Romney continued. "Without that bailout, Detroit will need to drastically restructure itself. With it, the automakers will stay the course - the suicidal course of declining market shares, insurmountable labor and retiree burdens, technology atrophy, product inferiority and never-ending job losses. Detroit needs a turnaround, not a check."

That includes new labor deals, so that the companies can be more competitive; new management that will be more collaborative with labor; and big investments in new technology, said Romney, who made similar points in an interview yesterday on CNN.

Romney, who is staying active in national GOP politics and could be positioning himself for another run in 2012, advocates a "managed bankruptcy" instead to save the industry.

Huckabee feeling a little envious of Palin's rise
WASHINGTON - Mike Huckabee wouldn't rule out a 2012 run for president yesterday, but he acknowledged it could be hard to take back the spotlight from fellow Republican Sarah Palin.

"I'm not ruling anything out for the future, but I'm not making any specific plans," Huckabee told reporters at a briefing to promote his new book, "Do the Right Thing." "It's not something I'm sitting around thinking about."

Huckabee, a former Arkansas governor, said he expects Palin to continue to have a leading voice in the Republican Party, though he acknowledged he was envious of her meteoric rise after Senator John McCain brought her out of relative obscurity to run with him this year as the vice presidential candidate.

Huckabee credited Palin with energizing McCain's campaign and said that her surprise selection helped her to "leapfrog over the process" that other Republicans - including himself - had to endure to become national political figures.

Huckabee, who ran a scrappy but underfunded presidential campaign and emerged as McCain's last major opponent for the nomination, plans to stay on the national political stage through the shows he hosts on Fox News Channel and ABC Radio.

Representative Eric Cantor of Virginia was selected to replace Roy Blunt of Missouri as the party's vote-counting whip. Cantor, the chief deputy whip, has emerged as a top fund-raiser for his party.